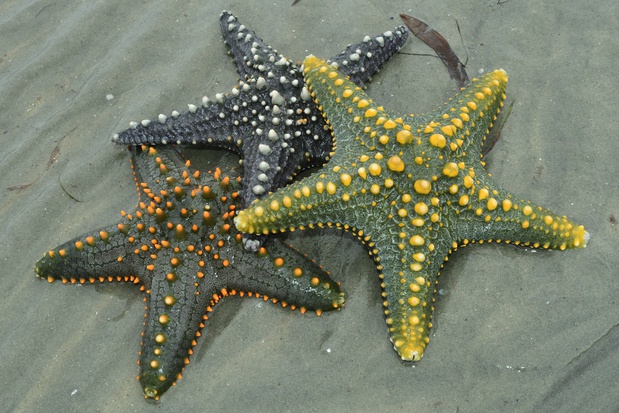 Beachcombing in front of Kijongo Bay Resort, you never know what you might find.

We came across quite a few brightly coloured starfish, and wanted to know more about these strange creatures, which we thought we would share with you.

What is a starfish? 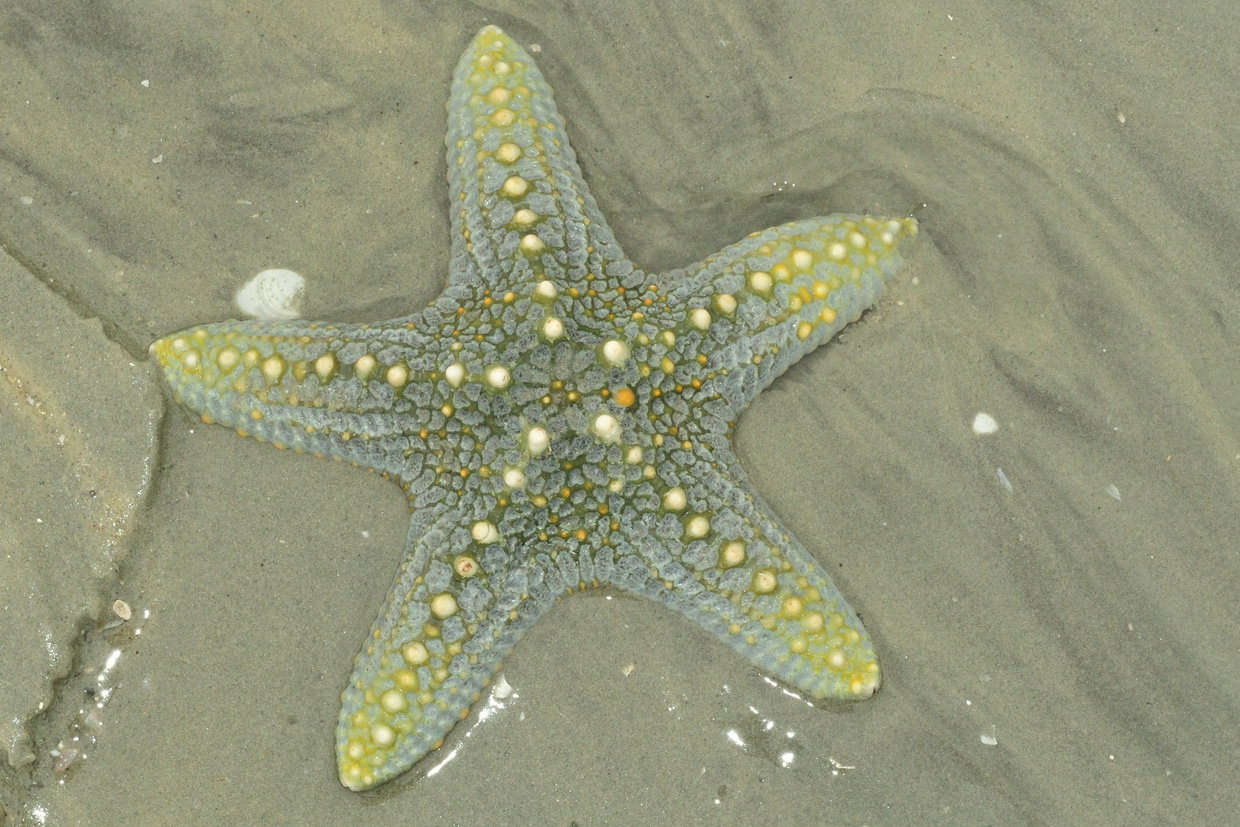 Let’s start with the fact that a starfish is not a fish, not even with a vivid imagination is it a fish, but it is an animal. Starfish get their common name due to their shape.

A starfish is an echinoderm, a type of marine invertebrate, belonging to the asteroidean class.

An echinoderm is basically a type of sea creature with sharp points or raised areas on its skin, and a body made up of five equal parts arranged symmetrically around a central area (known as a pentamerous radial symmetry).

Starfish are mostly carnivore predators, with some being omnivorous.

Starfish fossils date back to 350 million years. There are around 2000 species, which are mostly found in artic water conditions, with the balance on tropical reefs. Starfish are recorded from the intertidal zone to the depths of the oceans.

Starfish cannot survive in fresh water, however there are a couple of species that are able to live in brackish water.

Lifespan is, an amazing, up to 35 years. 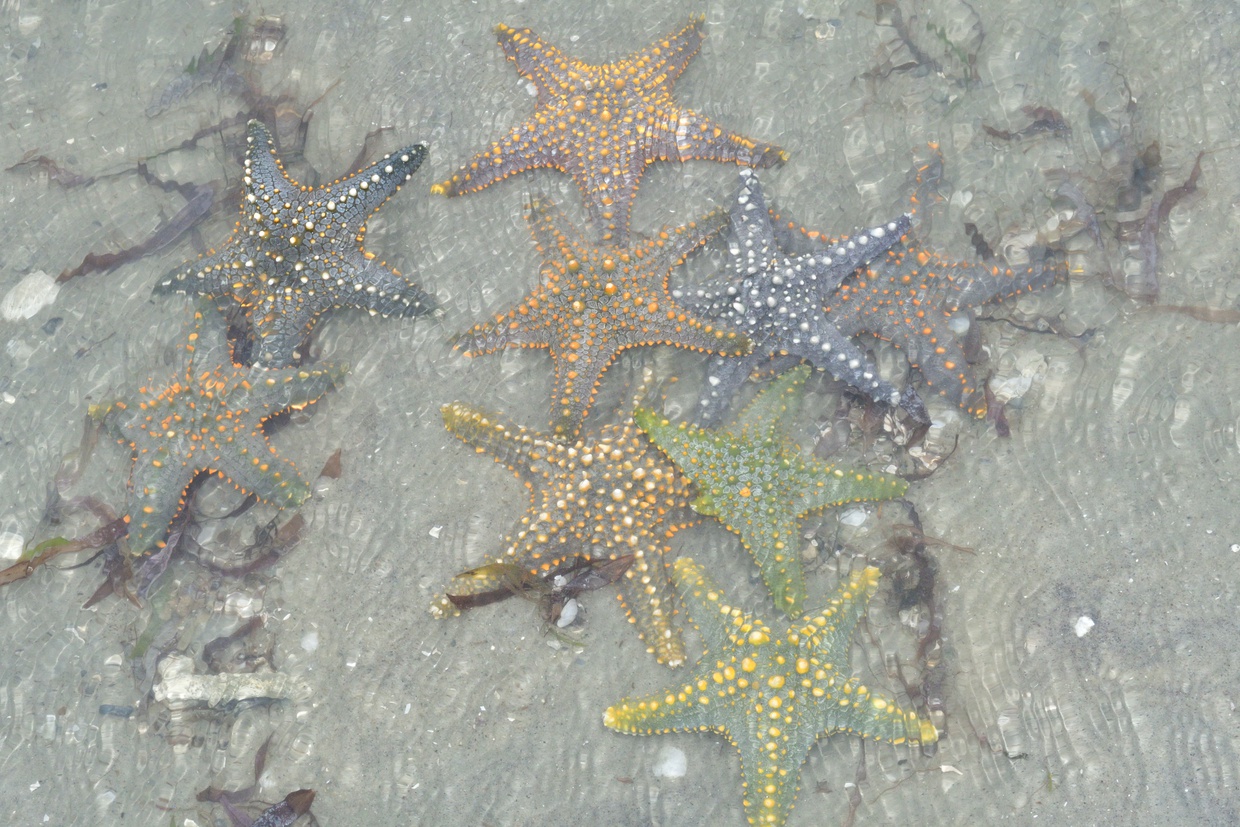 Starfish can reproduce both sexually and asexually.

Starfish reproductive organs are found on the end of their arms. When sexual reproduction occurs, the female will release eggs into the water, with the male releasing sperm. The eggs are fertilized in the water. 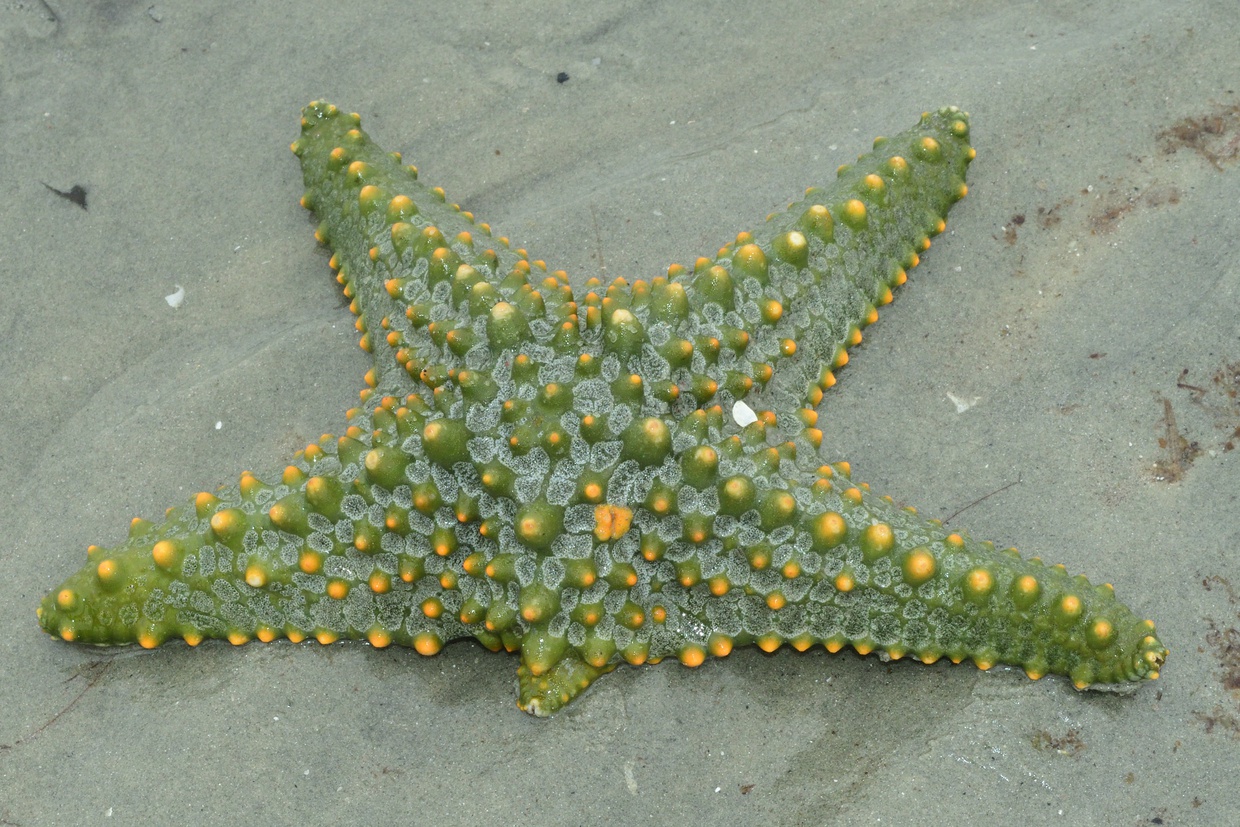 Some starfish link arms to release gametes, a process called pseudocopulation. The eggs either free float in the water, or they can attach themselves to rocks, until they hatch to become larvae. This spawning normally happens as a spawning aggregation, with spawning on mass. This is commonly known as oviparous because embryos form and develop externally. 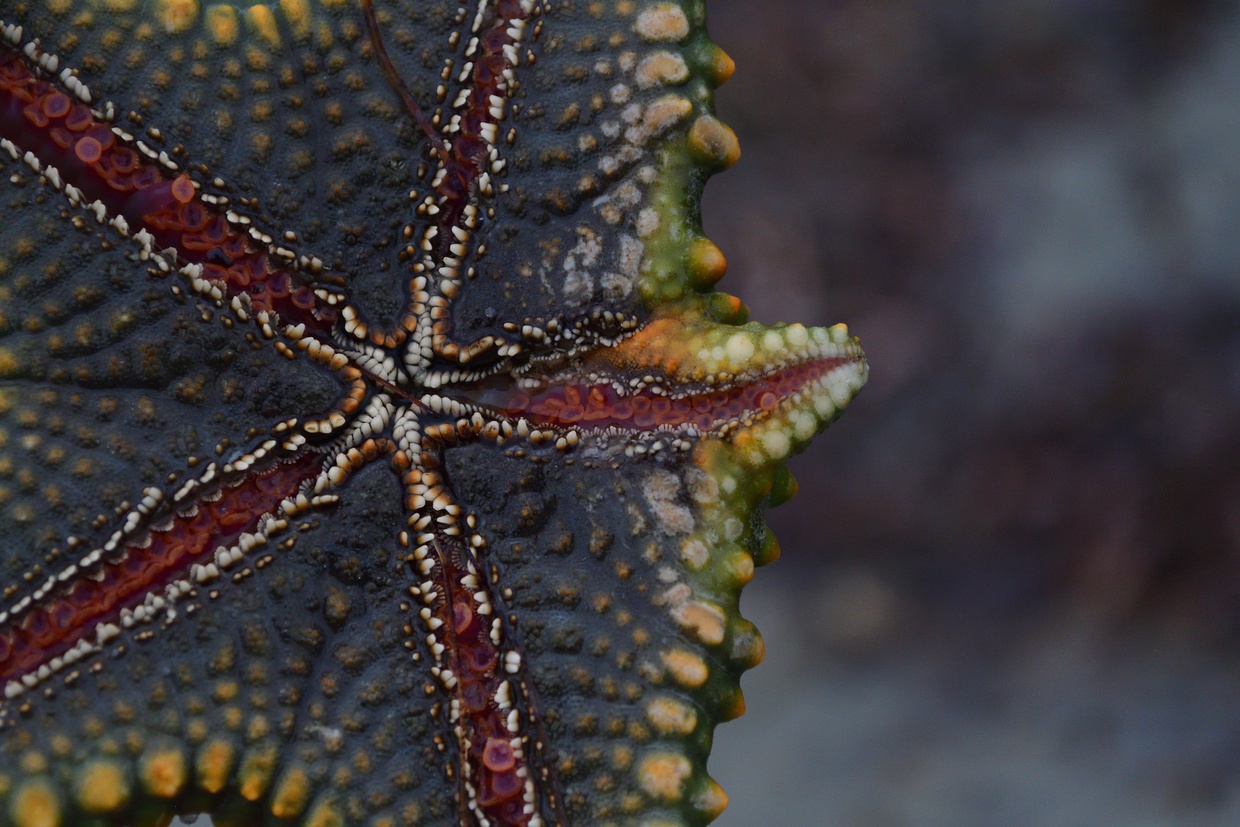 Asexual reproduction also takes place with starfish. Starfish have the ability to regenerate lost arms, this is hard work for a starfish, and can take several months to regrow. 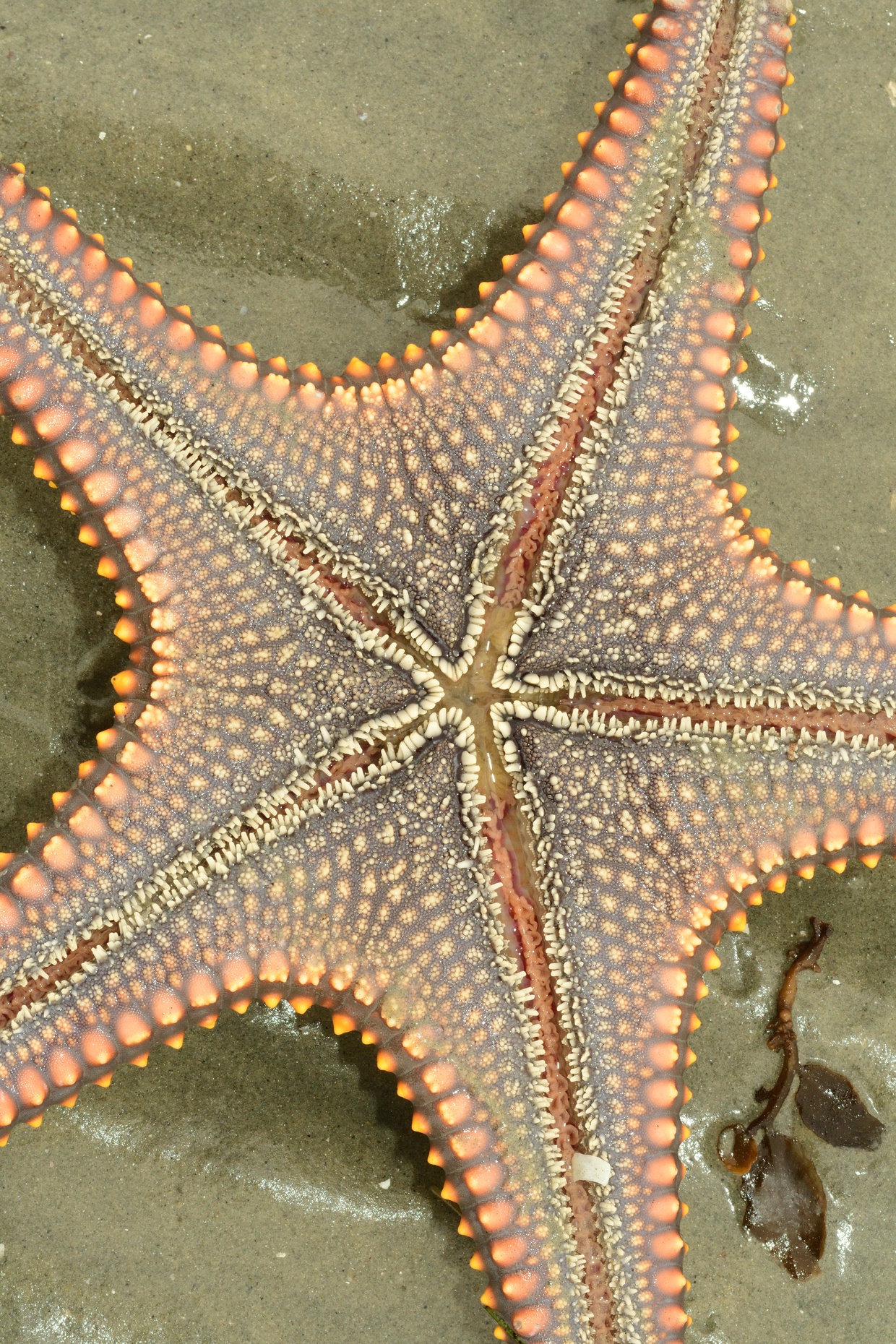 Asexual reproduction is not the best way to reproduce in the long run, as it limits genetic diversity. 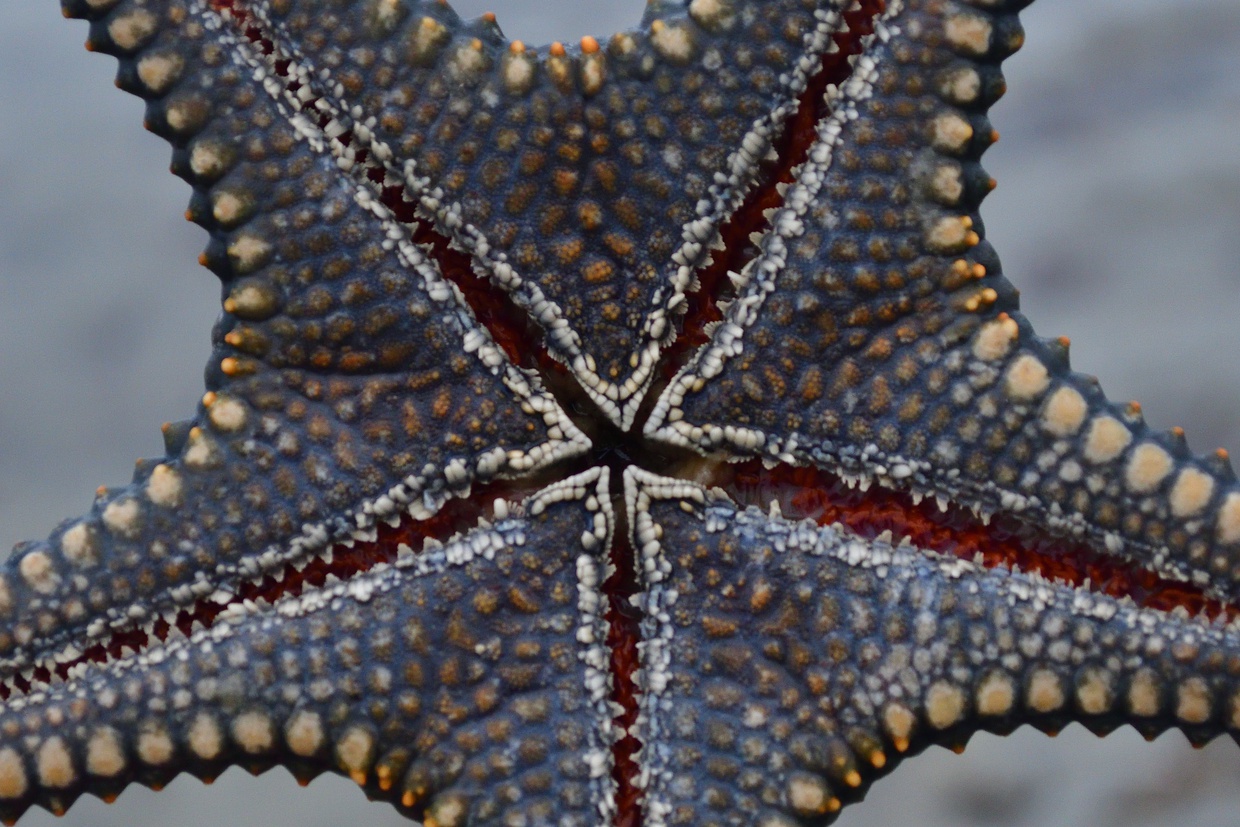 Starfish are almost exclusively carnivorous, feeding on the flesh of other marine creatures. Their diet is mostly made up of shelled mollusks. The starfish is able to break open mollusks with their powerful, suction cupped feet. 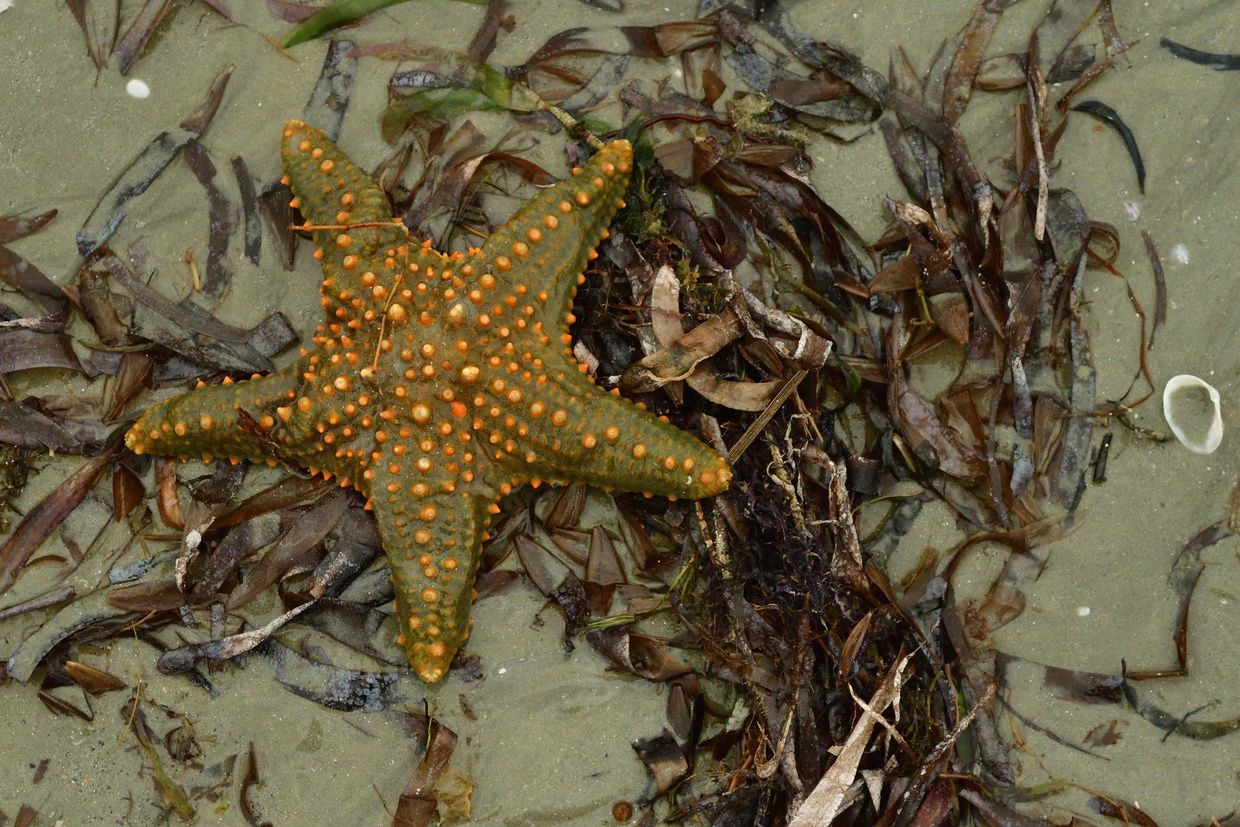 Starfish have two stomachs, namely, cardiac and pyloric. Once they have their target prey in their grasp, the cardiac stomach is pushed out of the underside of the central disk. This stomach surrounds the prey, and then releases digestive enzymes, which are absorbed into the pyloric stomach. This process is called eversion. With a starfish digesting its food outside its body, it is able to hunt and eat prey that is far bigger than their mouths. Starfish are not 100% carnivores, they will also supplement their diet with organic detritus or algae.

Predators and self protection of starfish 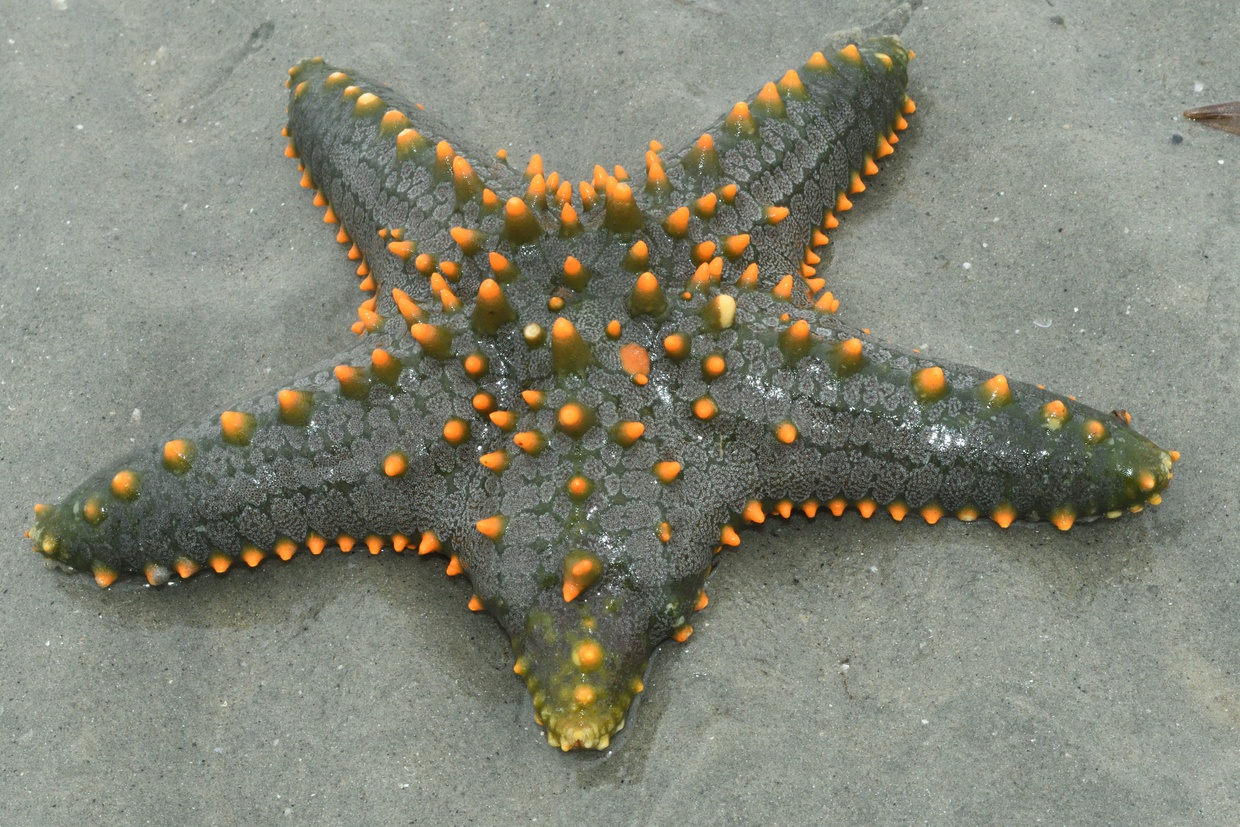 A few animals prey on starfish, but starfish are not that easy to eat and catch, due to their defense mechanisms. They use their unpalatable rough bone like exoskeleton, plus they cling to substrate on the ocean floor, to protect themselves using their suction cup-like structures.

Being very slow moving, starfish cannot flee their predators. Some starfish have toxins in their skin and spines to ward off predators. For some starfish, camouflage is their best defense.

They are preyed on by bottom feeding sharks and stingrays, octopus, larger starfish, and when left high and dry by the tide, seabirds and humans. 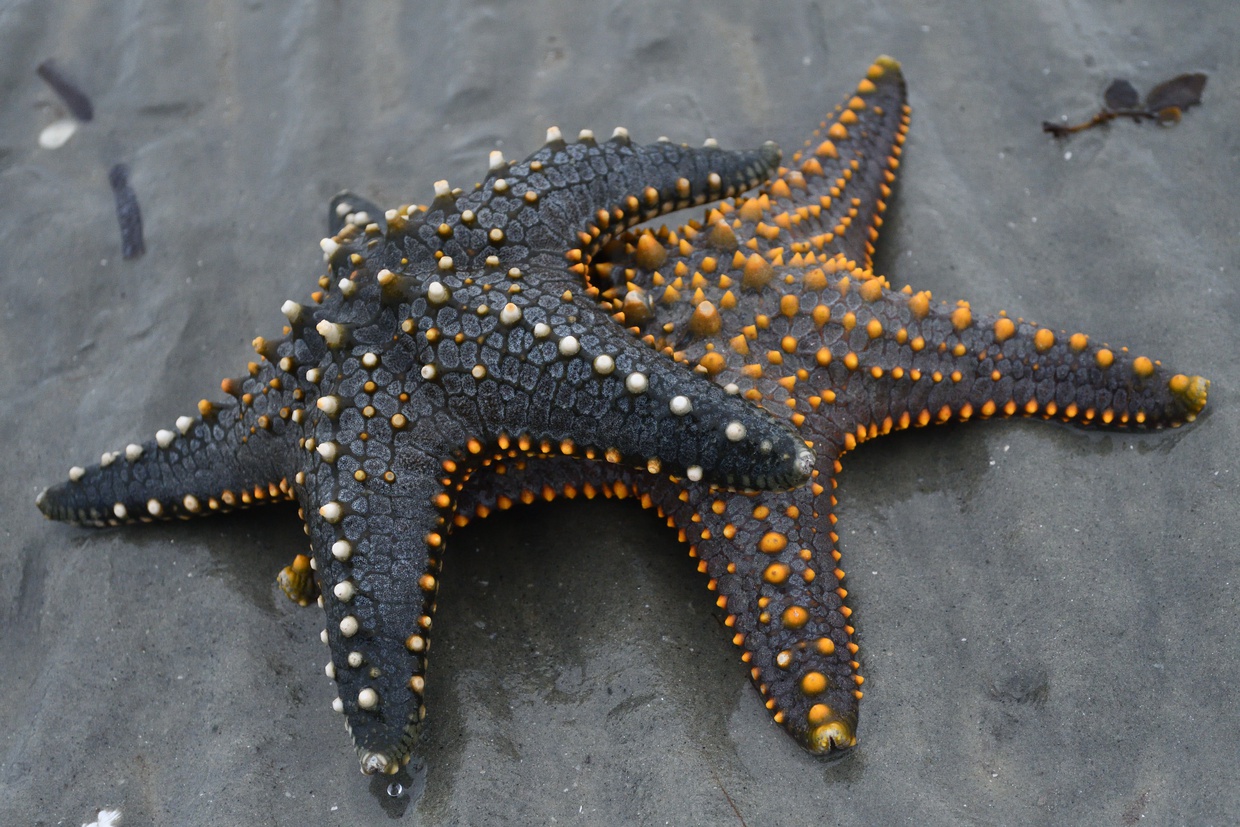 Believe it or not, starfish have eyes.

These are not eyes as we think of traditionally, but more like a vision sensor or eye spots. These are found at the end of each leg. They are simple eyes and are composed of simple cells, and a starfish can react only to light and dark with their eye.

A starfish uses its tube like feet for touch and sensation. They also use their feet to measure temperature. 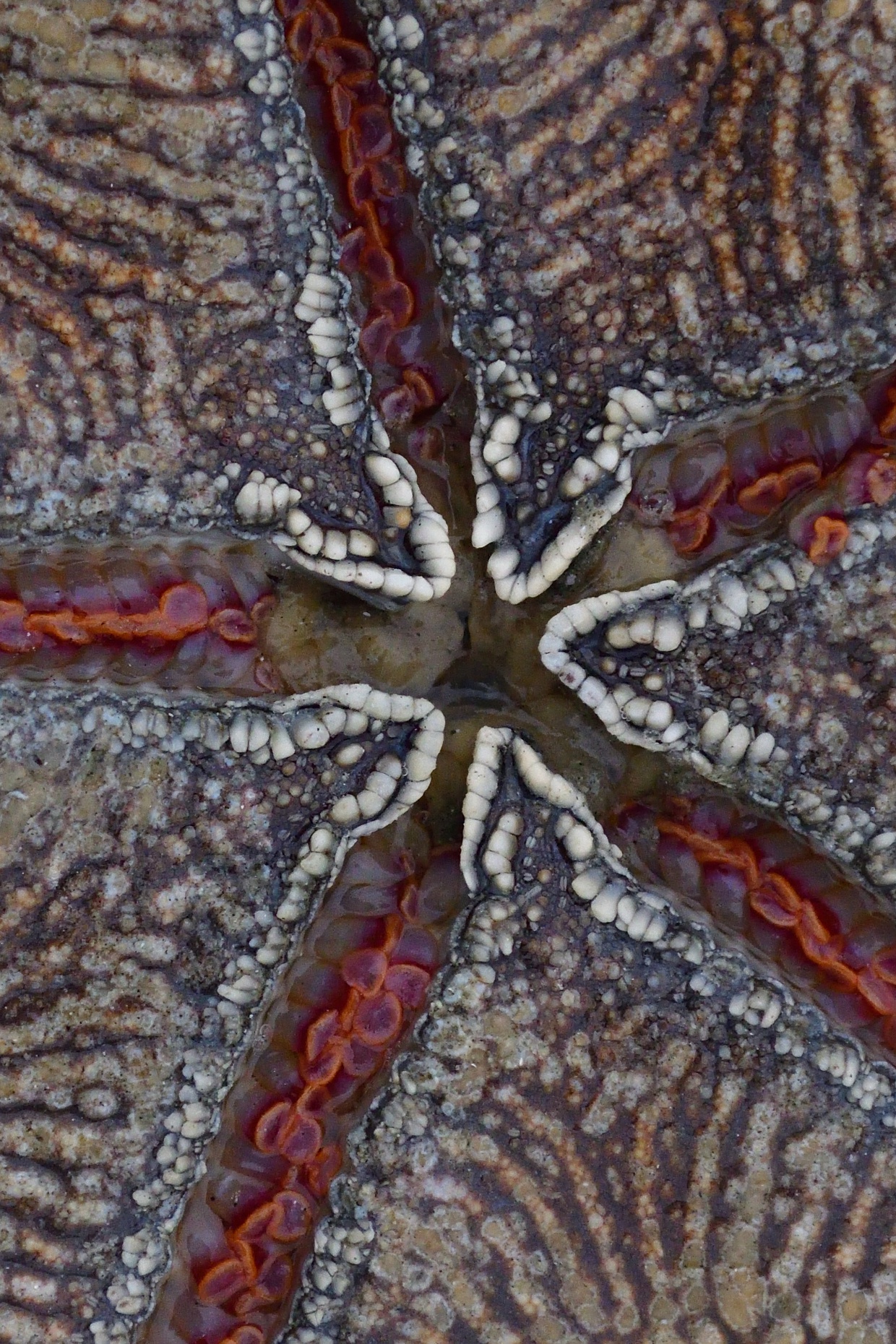 As an echinoderm, starfish have a hydraulic water based vascular system, that is responsible for locomotion, suction on the feet, feeding and gas exchange.

A starfish’s skin is made up from an endoskeleton of calcium carbonate, making a thick tough skin.

Starfish do have a heart that beats at around 6 beats per minute, pumping water containing oxygen and nutrients around the body. The water inside of a starfish is the same salinity as its surrounding water, this may explain why starfish cannot survive in fresh water. An internal electrolyte balance is needed with the surrounding water.

A starfish’s mouth, stomach and anus are found in the middle of the central disk, on the underside of the animal.

Starfish have internal gills for oxygen and carbon dioxide exchange, these are situated in the tube feet and small bulges on the surface of the disk and arms.

As sense organs go, starfish are not well equipped, but they are sensitive to touch, temperature, orientation, and chemicals (enabling the starfish to smell food)

Starfish do not have a brain, but a complex nervous system. Research shows that starfish are not able to plan its actions and is purely responsive.

The tube-like feet have no suction cup for adhesion but have adhesive chemicals that make them sticky. 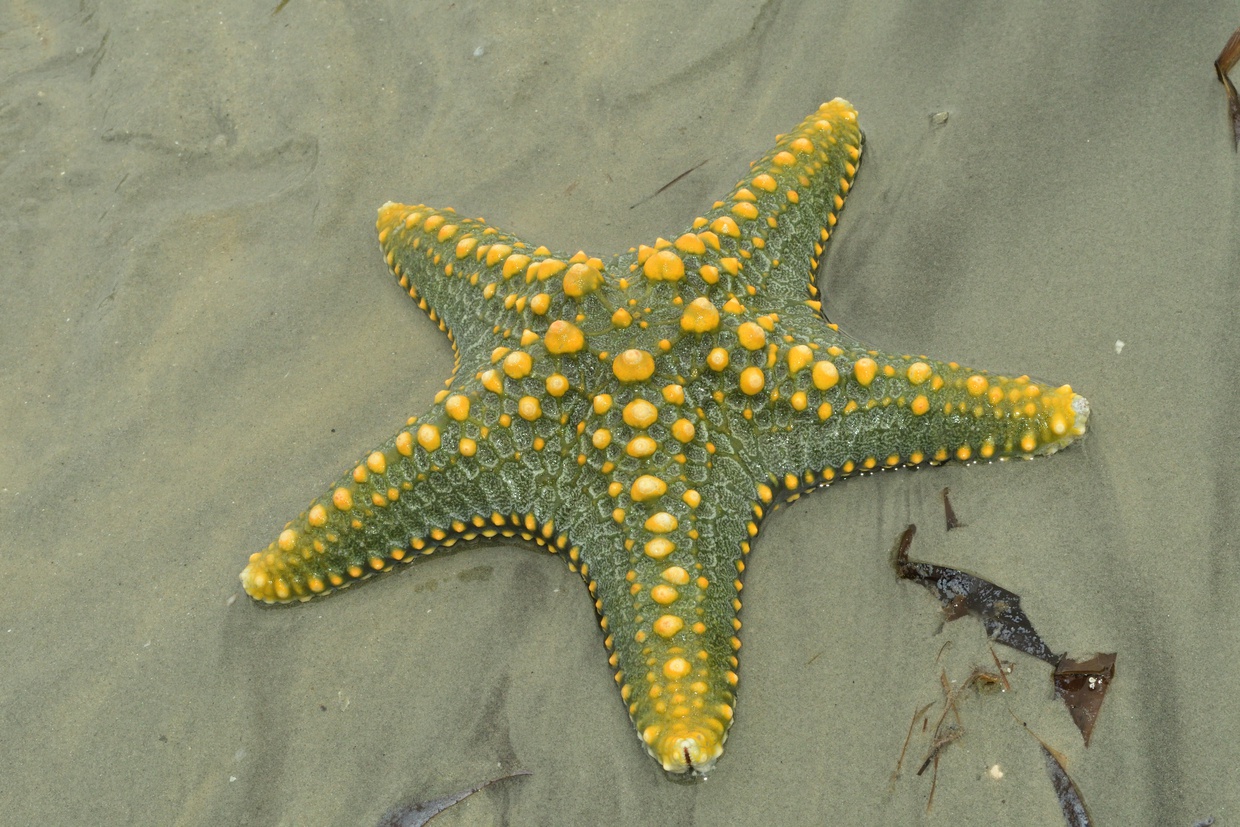 With starfish being a keystone species, anything that affects the starfish, will in turn, affect the well-being of the oceans.

Starfish are very susceptible to pollution. Starfish do not have a good filtering system and readily absorb any pollutants in the water. Starfish are temperature dependent; this is causing mass migrations of starfish looking for cooler water as sea temperatures rise.

Where starfish are eliminated, for any reason, opportunistic mollusks then start to proliferate, causing an imbalance that has taken millions of years to create.

Future starfish threats include, but are not limited to; global warming, rising sea temp, pollution, loss of habitat and loss of food.