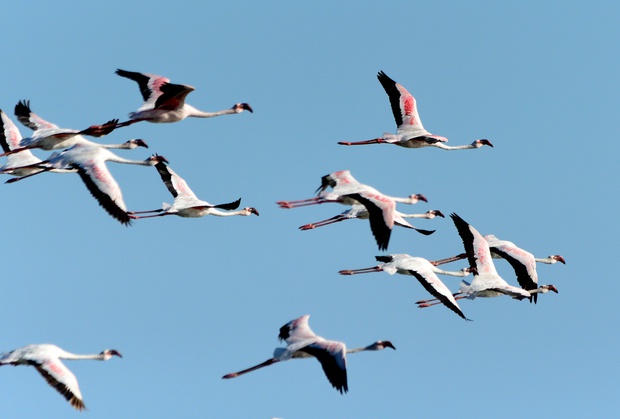 We had an unusual surprise one morning, right in front of Kigongo Bay Resort, a flock of greater flamingos, floating on the calm surface of the ocean.

A quick rub of the eyes and yes, they were still there.

Around 40 of these large bright pink birds were forming a raft in the bay. 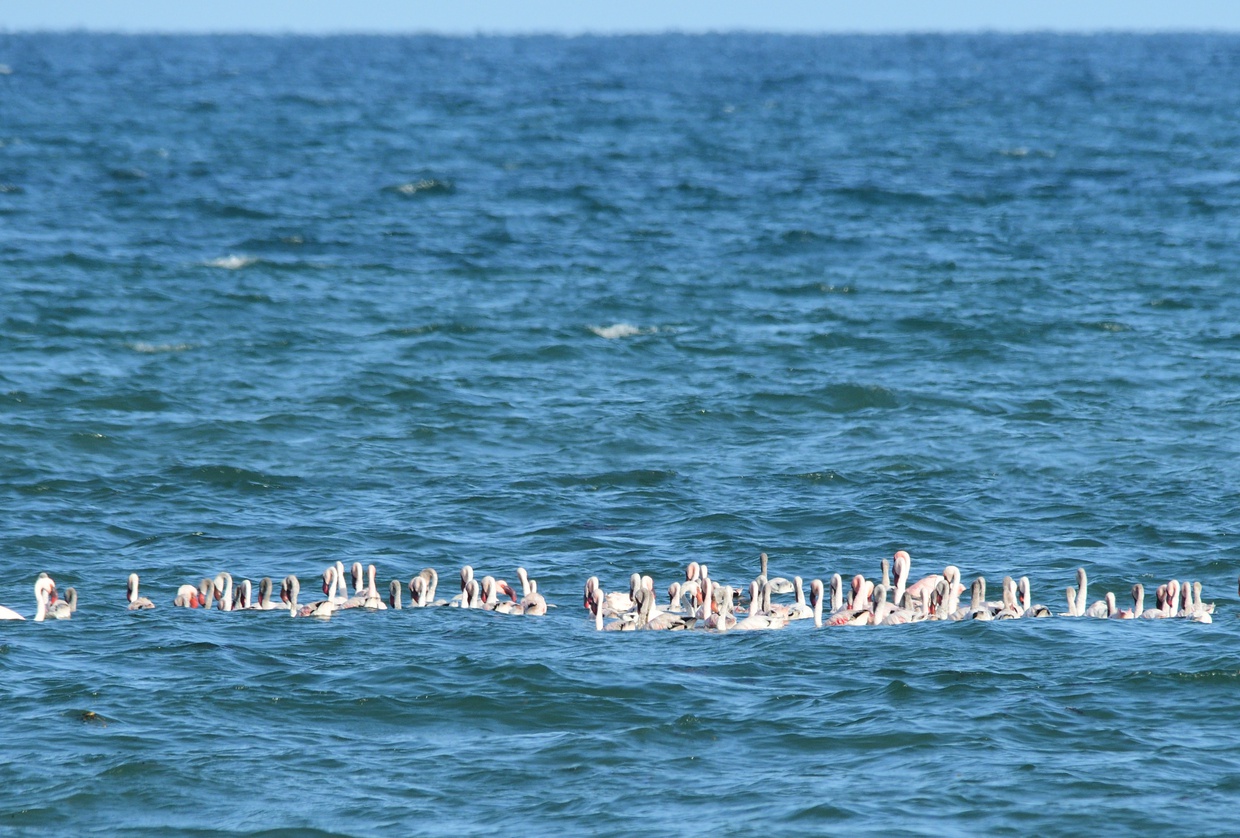 Well, this was to play out for the next few weeks. 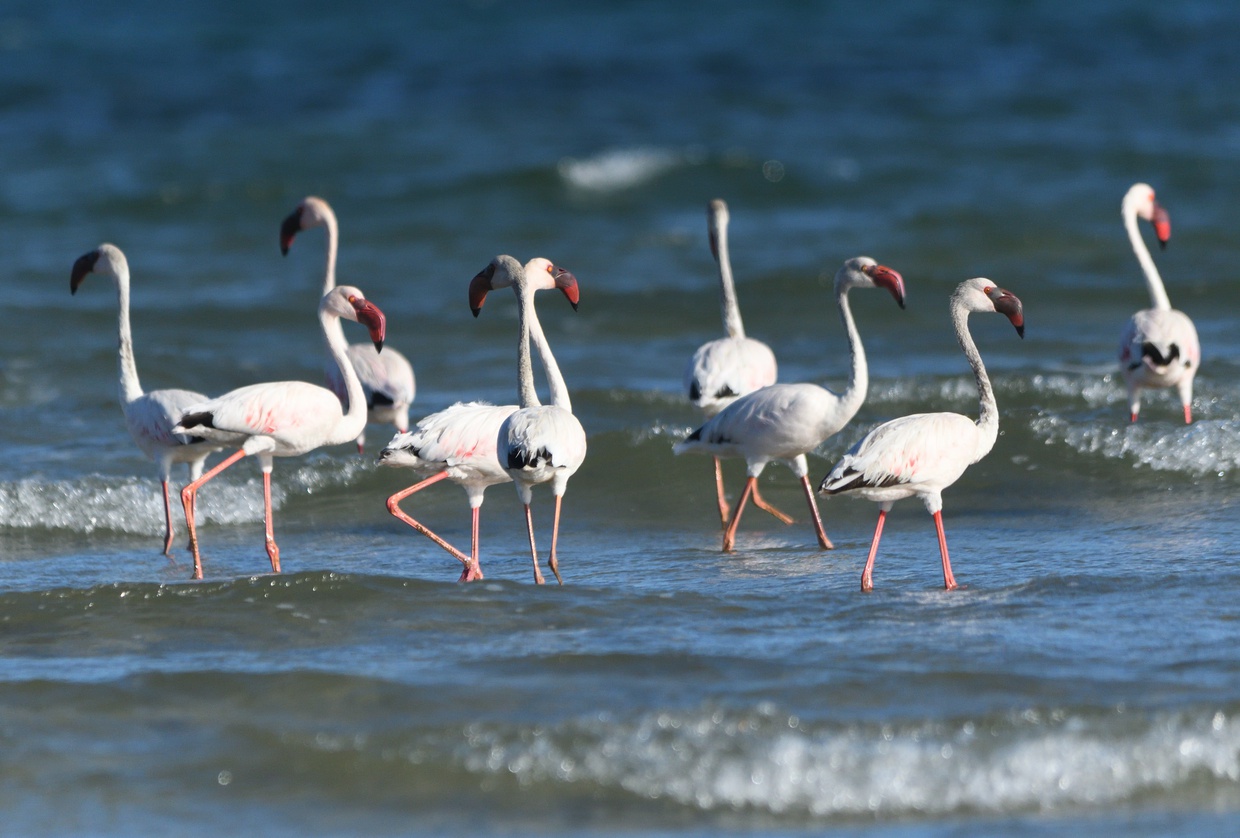 Seeing Greater flamingos in the sea is not that unusual, as they are found in a variety of salty habitats, including saltwater estuaries, mudflats and lagoons. They are also found in alkaline lakes (some of these alkaline lakes are inhospitable to most other species). What was unusual, was the way they floated and rafted together during the high tides; because in most of the places they normally assemble, they have contact with the bottom at all times, keeping to the shallow water.

Greater flamingos have both resident and migratory populations in East Africa.

Unfortunately, our visitors must have been migratory. 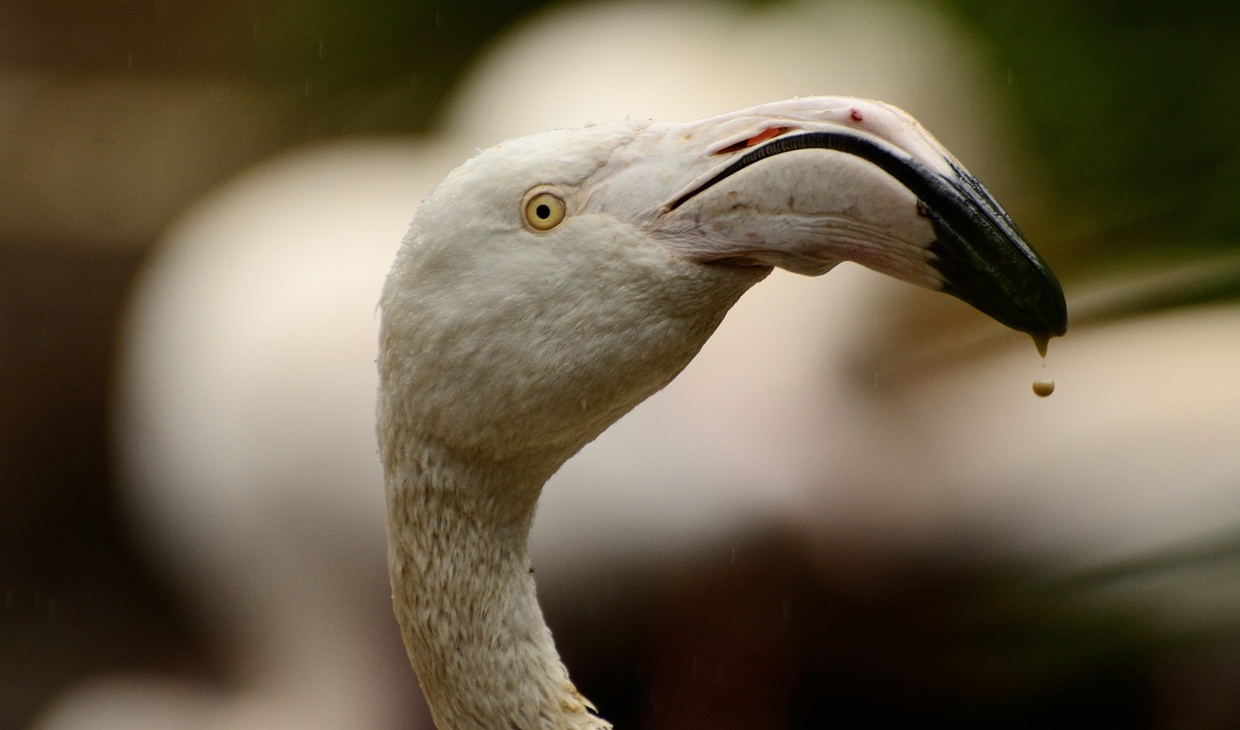 Greater flamingos (Phoenicopterus roseus) have a beak that is quite unique when compared to other birds. They have a pumping and filtration system built into their beak.

A greater flamingo feeds with its head upside down, submerged, in shallow water, using the beak to stir up the mud or sand, normally for around 20 seconds for each submersion. The water is sucked through the partially opened bill using the tongue, here the water is forced out through a fine row of hair like spines called lamella, arranged along the edge of the bill. Thus the water is filtered, leaving the food behind. The tongue acts as a pump by moving up and down rapidly, around 5 times per second.

Greater flamingo’s are often seen doing a shuffle type dance with their feet. This is to stir up the bottom to aid feeding, they are an omnivorous filter feeder. They consume a variety of things found in the mud and water; algae, diatoms, crustaceans, insect larvae, insects and mollusks.

The carotenoids found in the algae give flamingos their characteristic pink plumage. 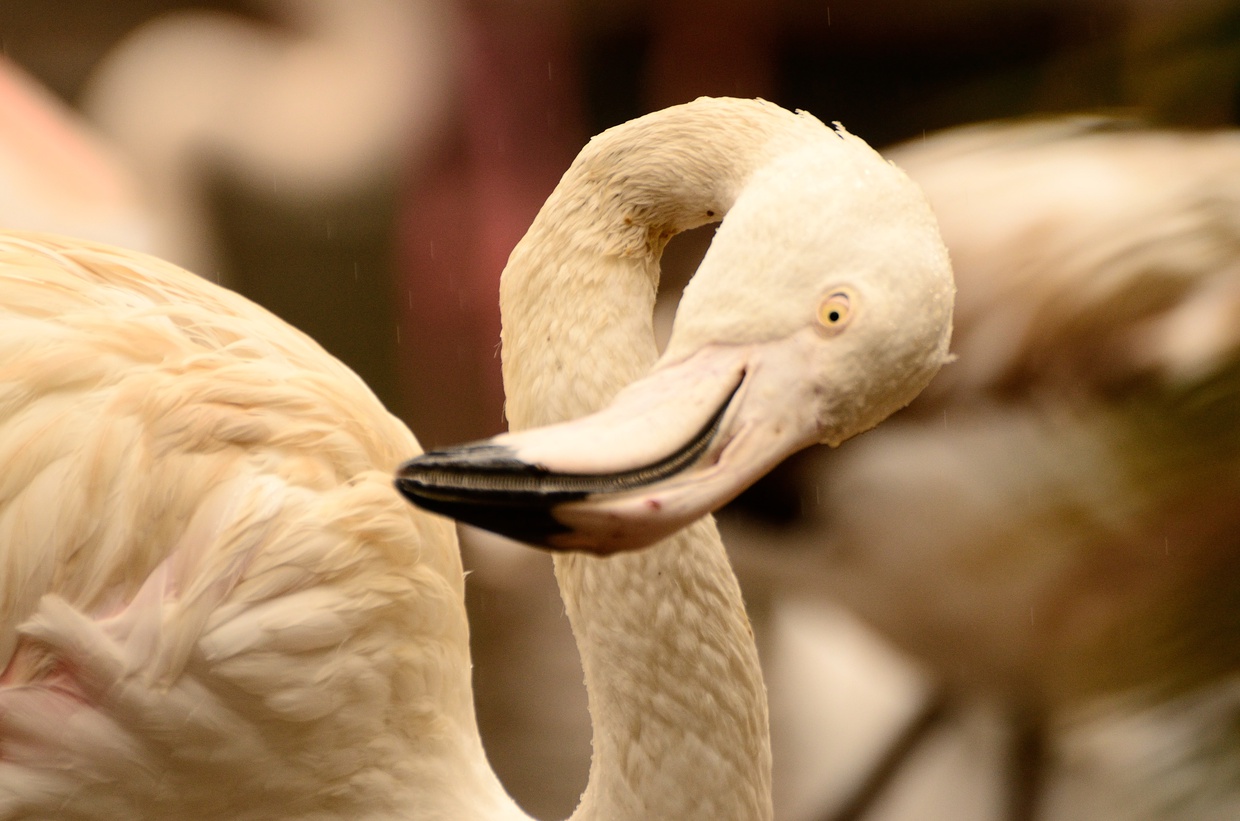 The majority of all birds have an uropygial gland or preening gland, located above their tail, that produces a range of biochemicals. These chemicals are normally in the form of a wax like substance, used in the maintenance of their feathers, including waterproofing, and the elimination of fungi and bacteria, during preening.

Flamingos take this to a new level, with the colour of the secretions caused by the carotenoid pigments, which enhances the colour of their plumage. This is more noticeable on the females and mostly during the breeding season. This has been described as applying “make-up”. 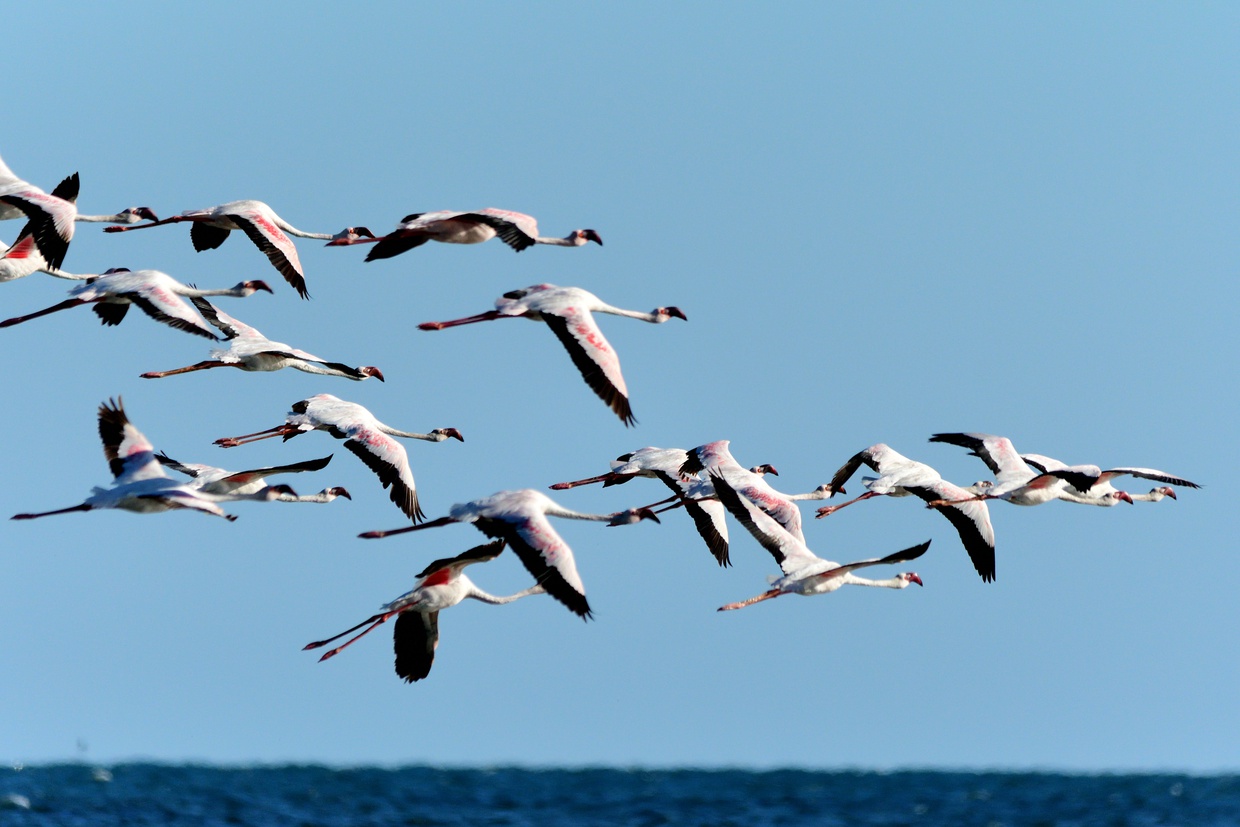 A greater flamingo, being the largest of the 4 species of flamingo, has some pretty impressive stats. Standing tall at between 110 cm and 150 cm, weighing in at between 2 and 4 kgs, plus a wingspan of up to 170 cm, all add up to make the great in their name.

This flamingo’s plumage is pinkish / white in colour, with dark red to pink wing coverts and black flight feathers. 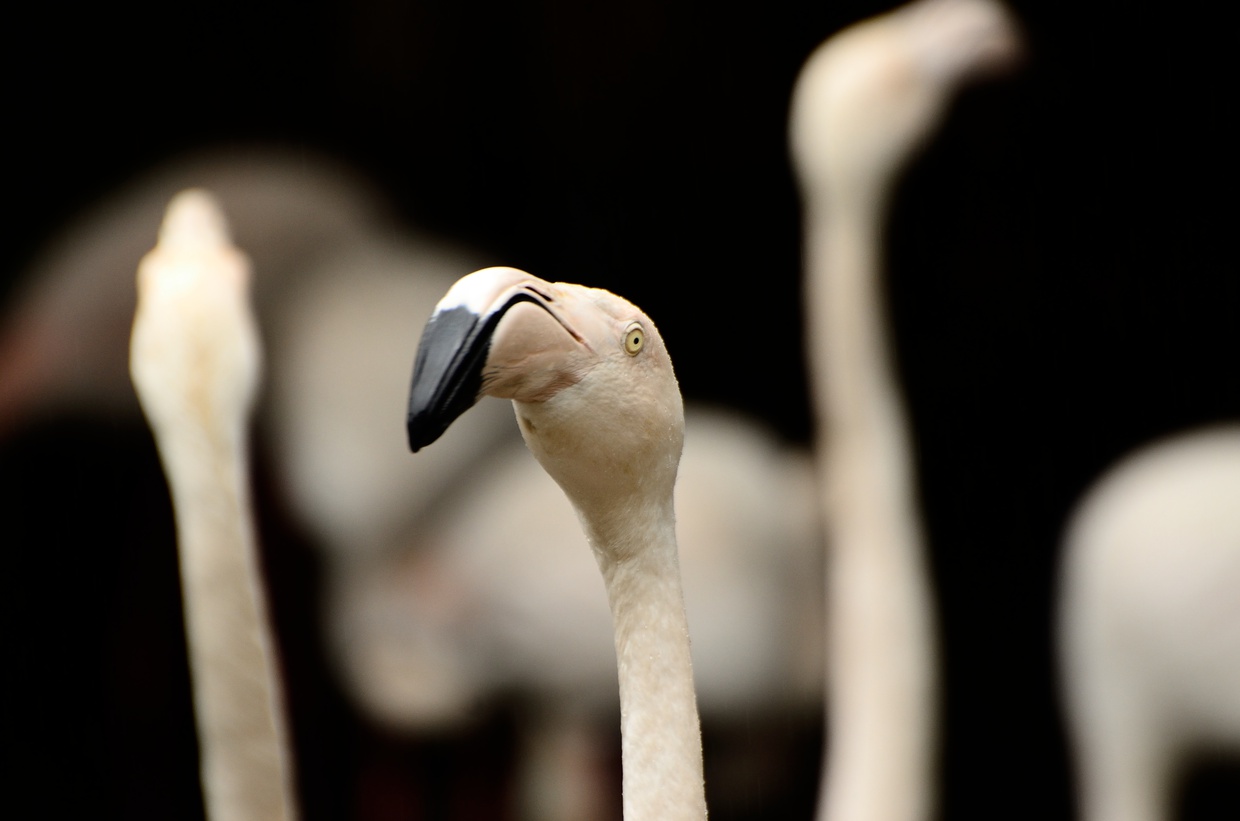 The bill curves downward and is pink with a black tip, this pink can range from light pink to dark pink. The long thin legs are pink, interestingly, what appears to be the flamingo’s knee, is actually its ankle. Add the long, thin, slightly curved neck and yellow to white eyes, they are unmistakable as flamingos. The females are slightly smaller than the males. Younger birds are more grey, with only a little pink colouration. 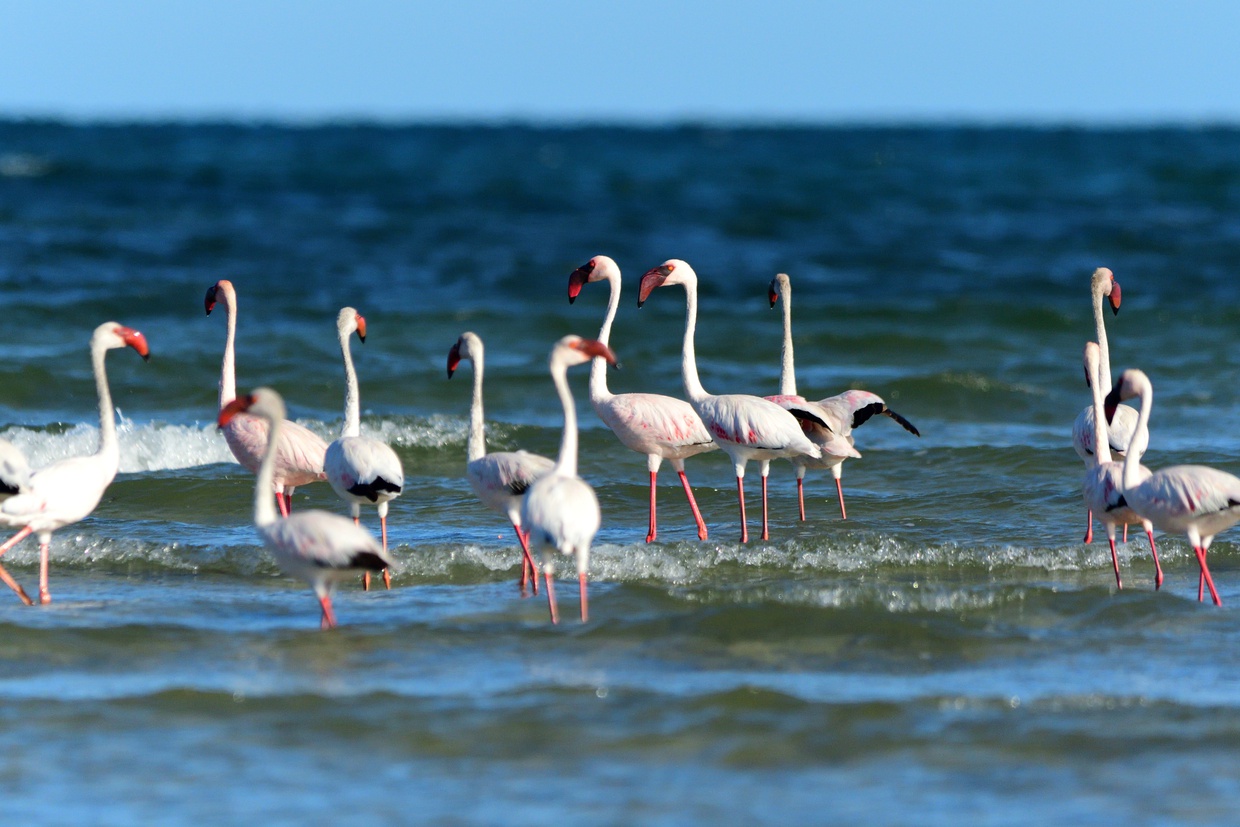 Flamingos in a flock, colony or stand are noisy, making a goose like honking noise continually. They will feed alternatively, with some of the birds keeping a heads up, on the lookout for any predators.

Greater Flamingos live for up to 40 years in the wild. The main threats for flamingo populations are bacteria, toxins, and pollution in the water they feed and breed in, this is normally a by-product of industry and farming. A reduction in available habitat is also a major threat for flamingos. 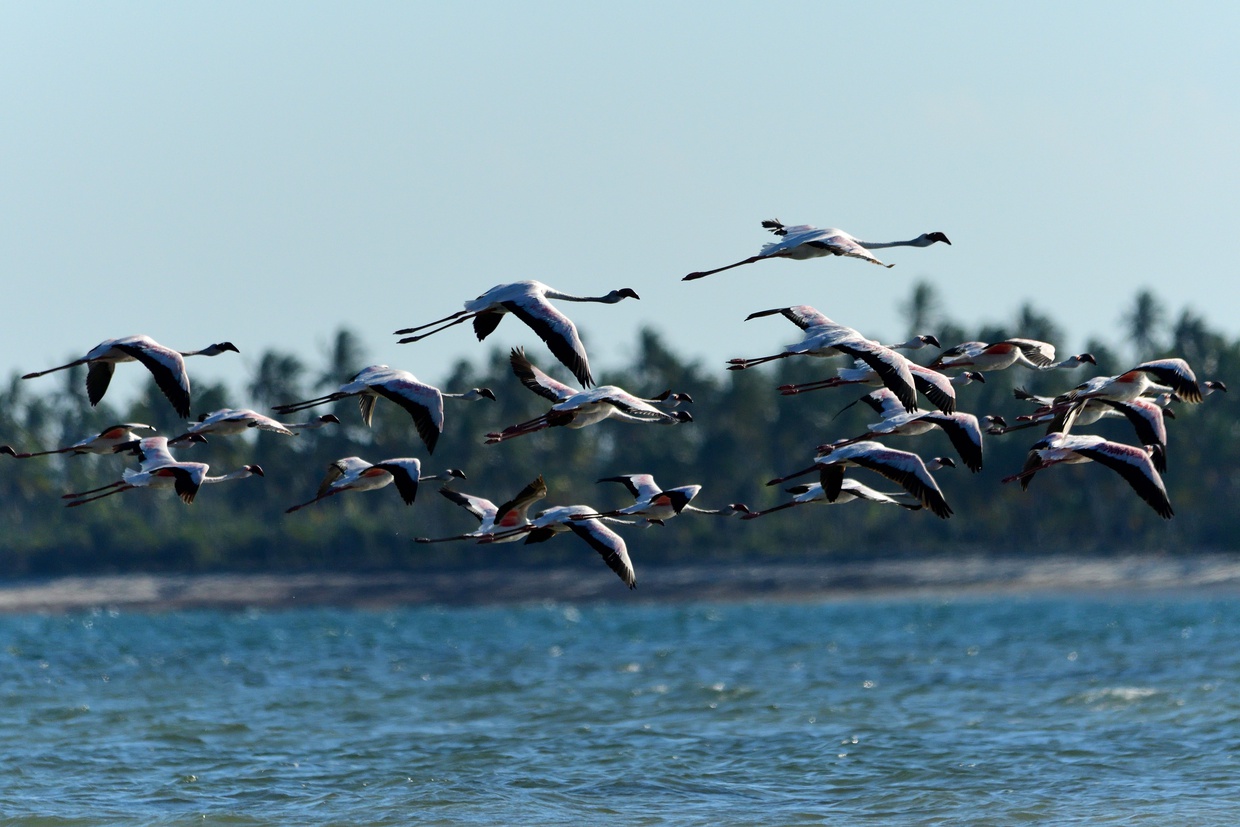