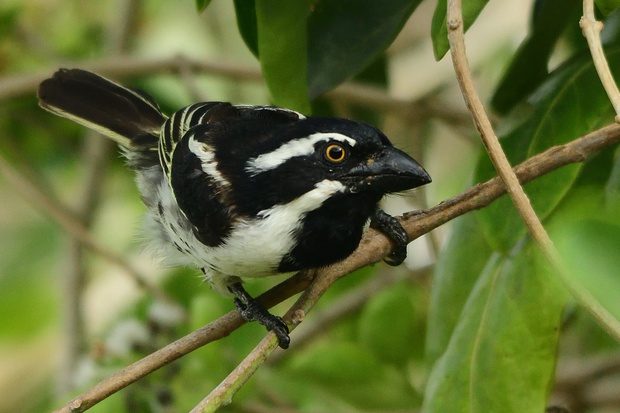 With the different seasons bringing different flowers and fruit, the birds in Kijongo's gardens are forever changing. Not only do we have our seasonal visitors, we also have our resident population of birds.

The morning wake up call is special at Kijongo, with a cacophony of bird song, not a lot can beat that morning coffee accompanied by natures alarm clock.

At the moment we will only post birds we are able to get a photograph of. There are, however, quite a few birds that we still need to photograph to bring our list up to date. We are working at getting photos of the mannikins, the puffbacks, different sparrows and a couple of smaller raptors that have been spotted visiting the gardens.
As the beach makes up part of our extended garden, a really big challenge is to photograph the shore birds found in front of Kijongo. 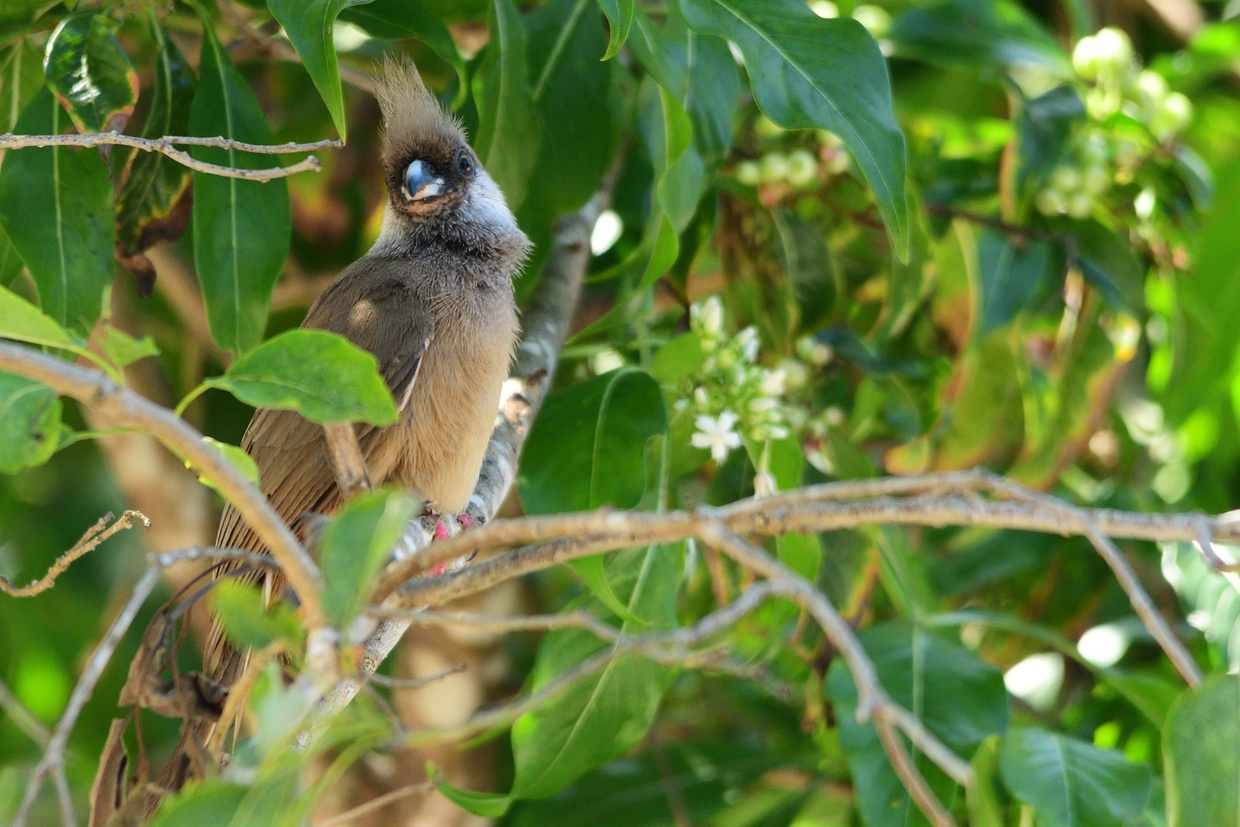 A slender grey mousebird with a thin, long tail. This mousebird is a uniform grey in colour, with a red bill and facial skin. A glossy blue patch on the back of the head accounts for its name.

Mousebirds get their name from the birds habit of resembling mice when running up and down branches and scurrying along the ground. Mousebirds are very dextrous with their toes and are often seen using one foot to perch and the other foot to hold onto their food. 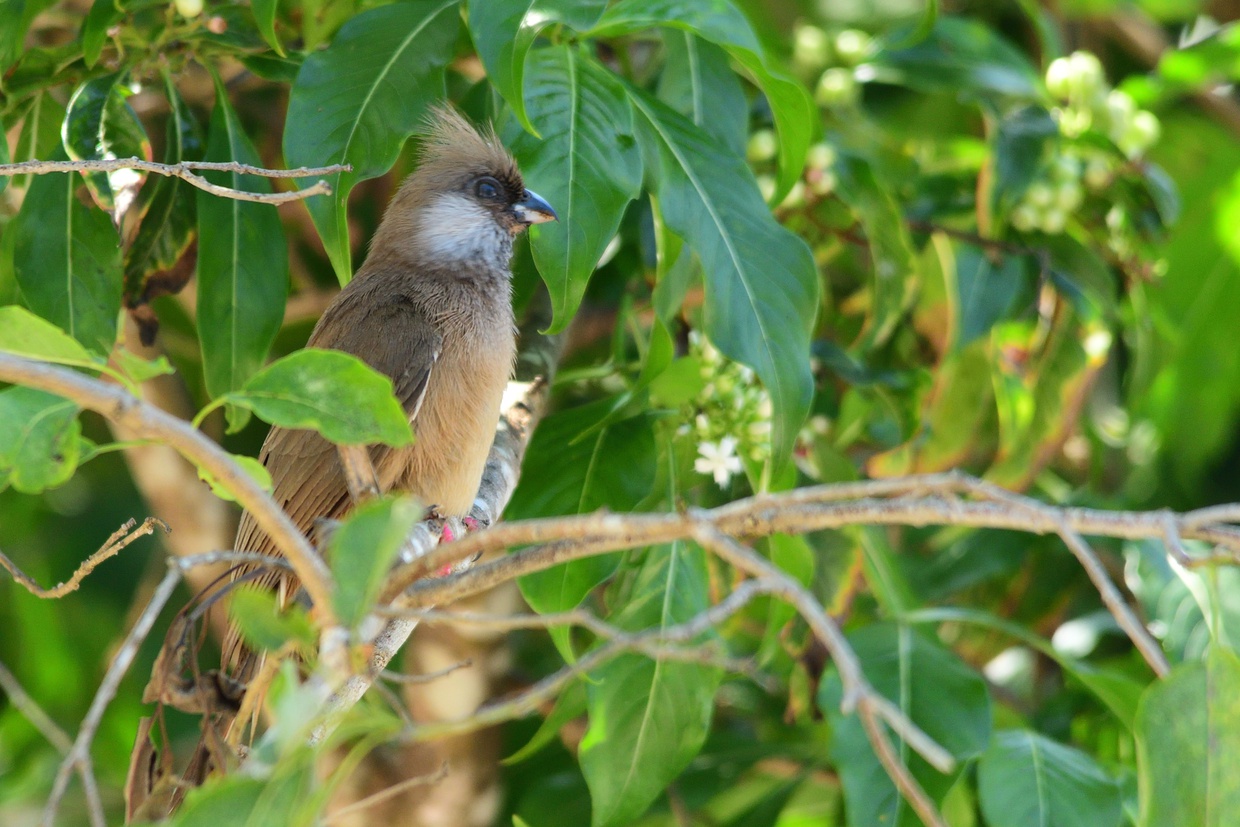 Mousebirds are found in small flocks ranging between a couple of birds to 30 plus, flying between trees in search of fruit. 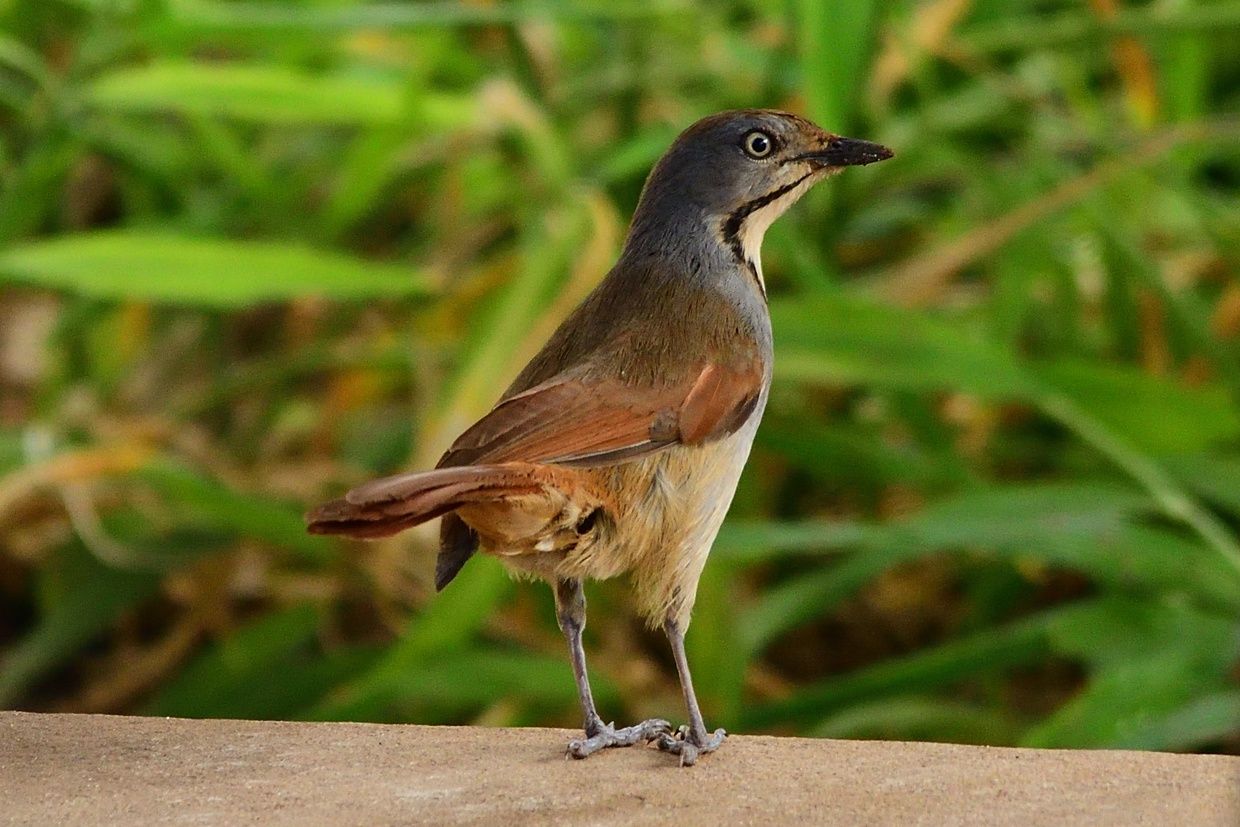 A vocal thrush with a powerful song. A small sized thrush at around 18cm in length. This bird has a buff breast and throat, with a narrow black collar. A grey head, breast and flanks, with the back being russet brown. The collard palm thrush has a pale cream eye.

The collard palm thrush is a shy and secretive bird, normally found around palm trees and thick undergrowth.

This thrush is heard more than it is seen. It spends its time foraging in leaf litter looking for insects and small invertebrates. 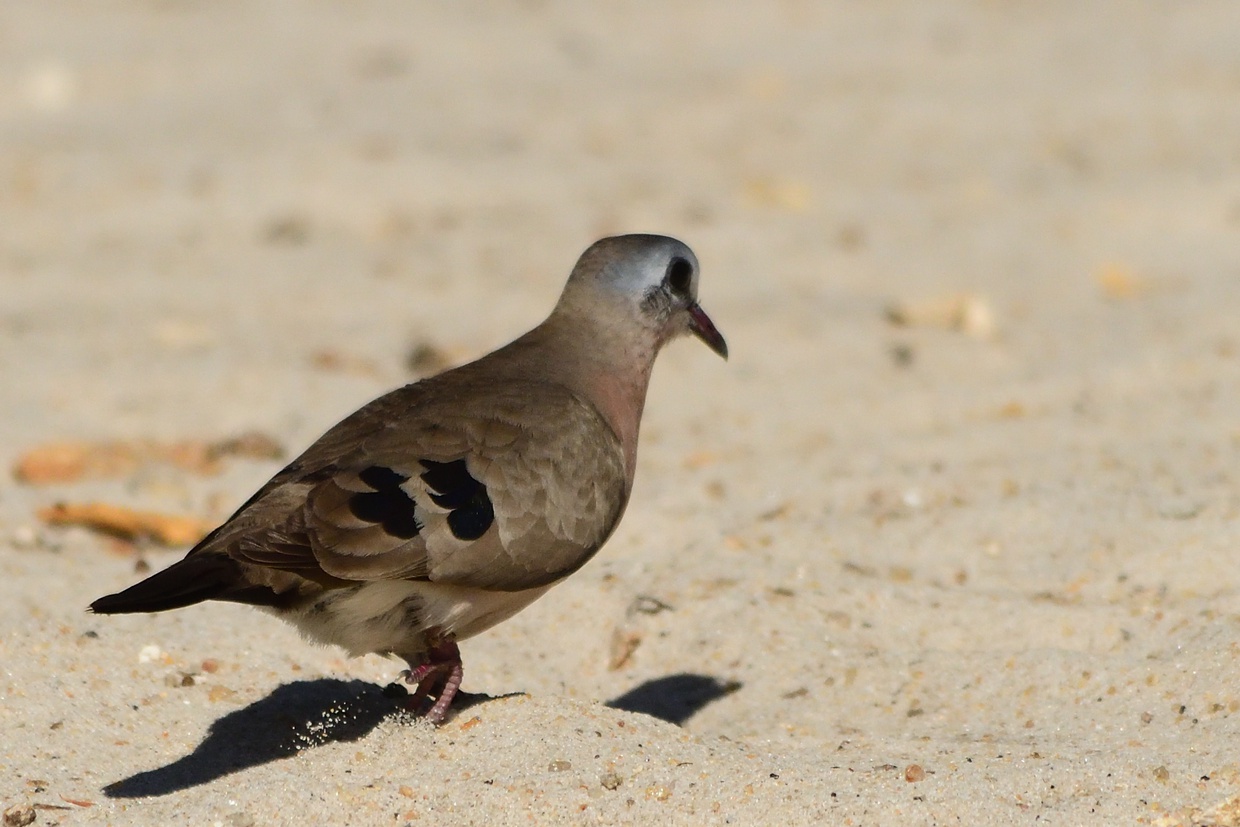 This medium sized dove is a uniform pale grey brown. The wing shield has 2 patches that are iridescent green.  When flying the emerald spotted wood dove shows rufus coloured wings and 3 darker bands across the back and tail. The neck, breast and chest are a pale mauve pink. The eye is brown. 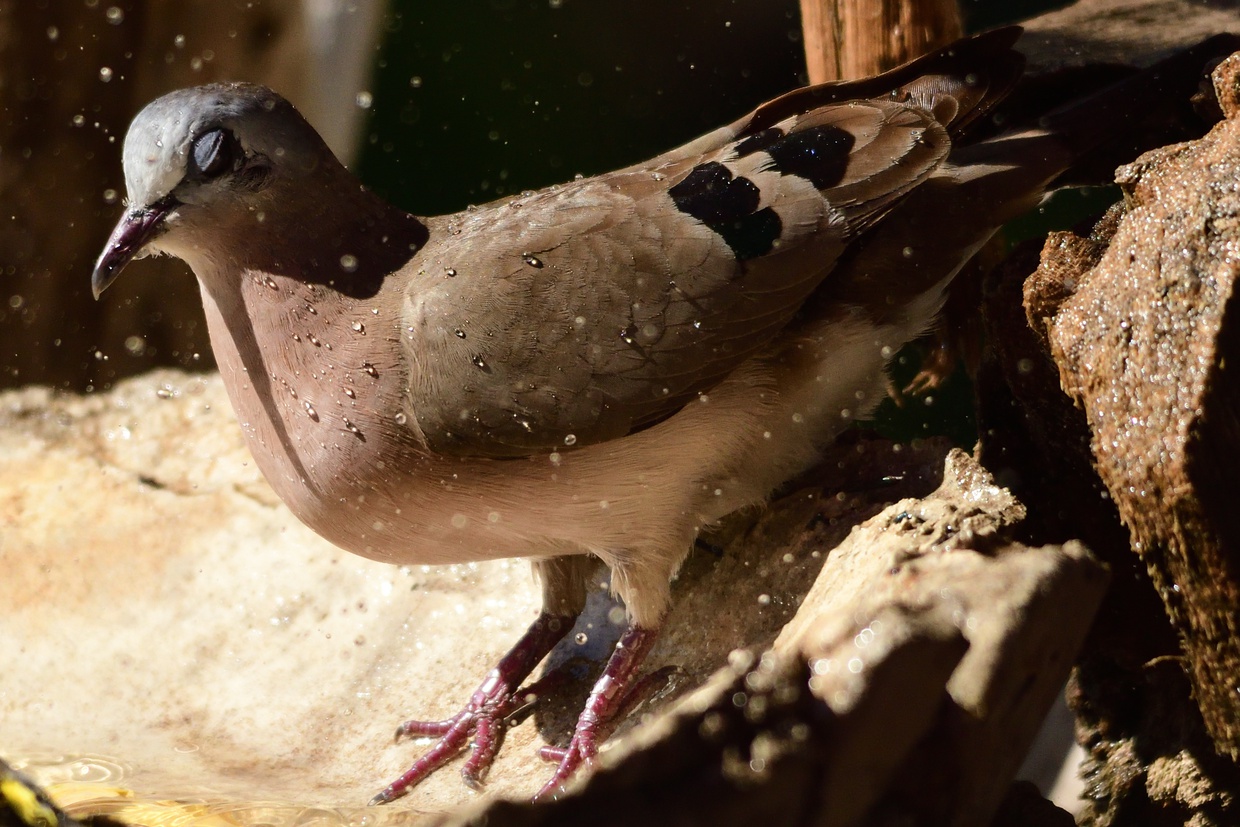 The Emerald spotted wood dove call is a series of soft dove like coos, in a series of 12 to 15 coos. 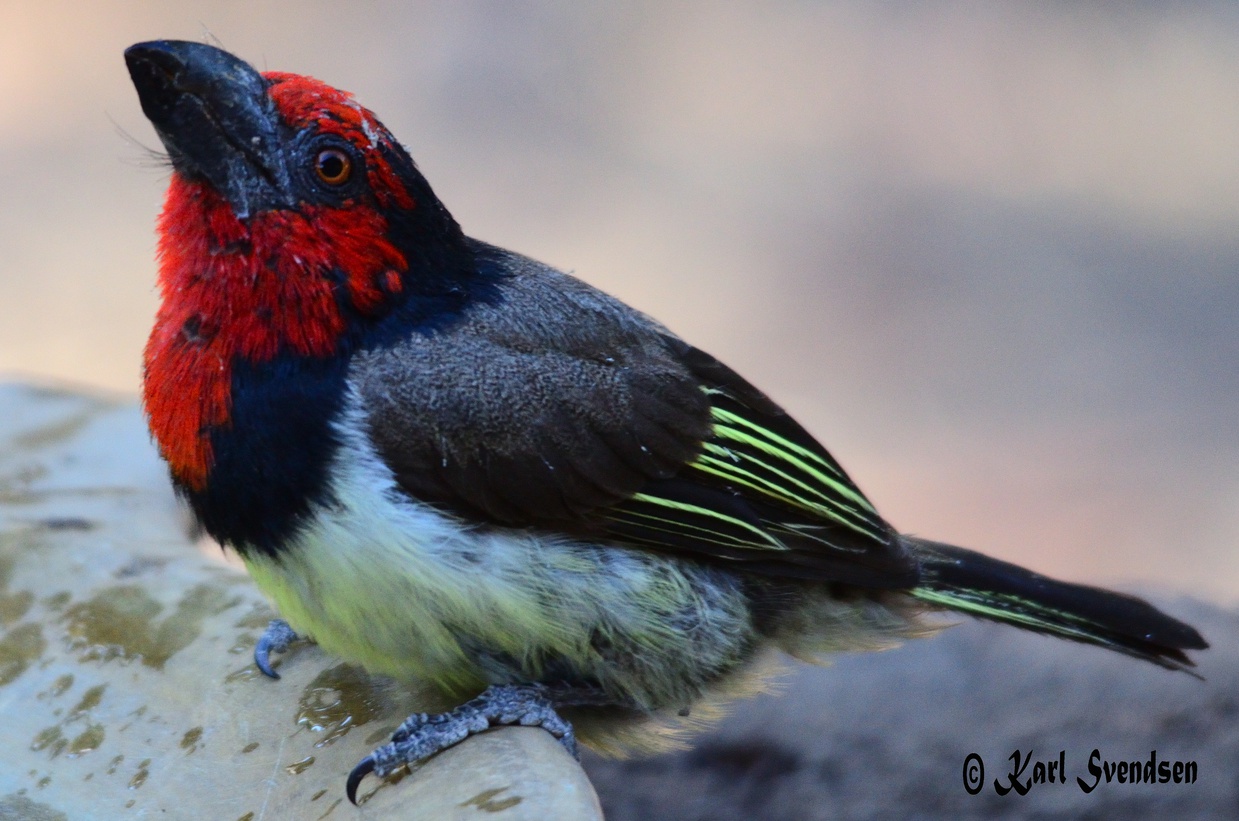 A well built, medium sized barbet, with a red face and a ragged sided black neck cowl and breast collar. This barbet has a heavy bill, that is dark in colour and a white to yellowish belly.

Black collard barbet feed mostly on fruit and vegetables, with occasional insects, lizards and frogs added to its diet. 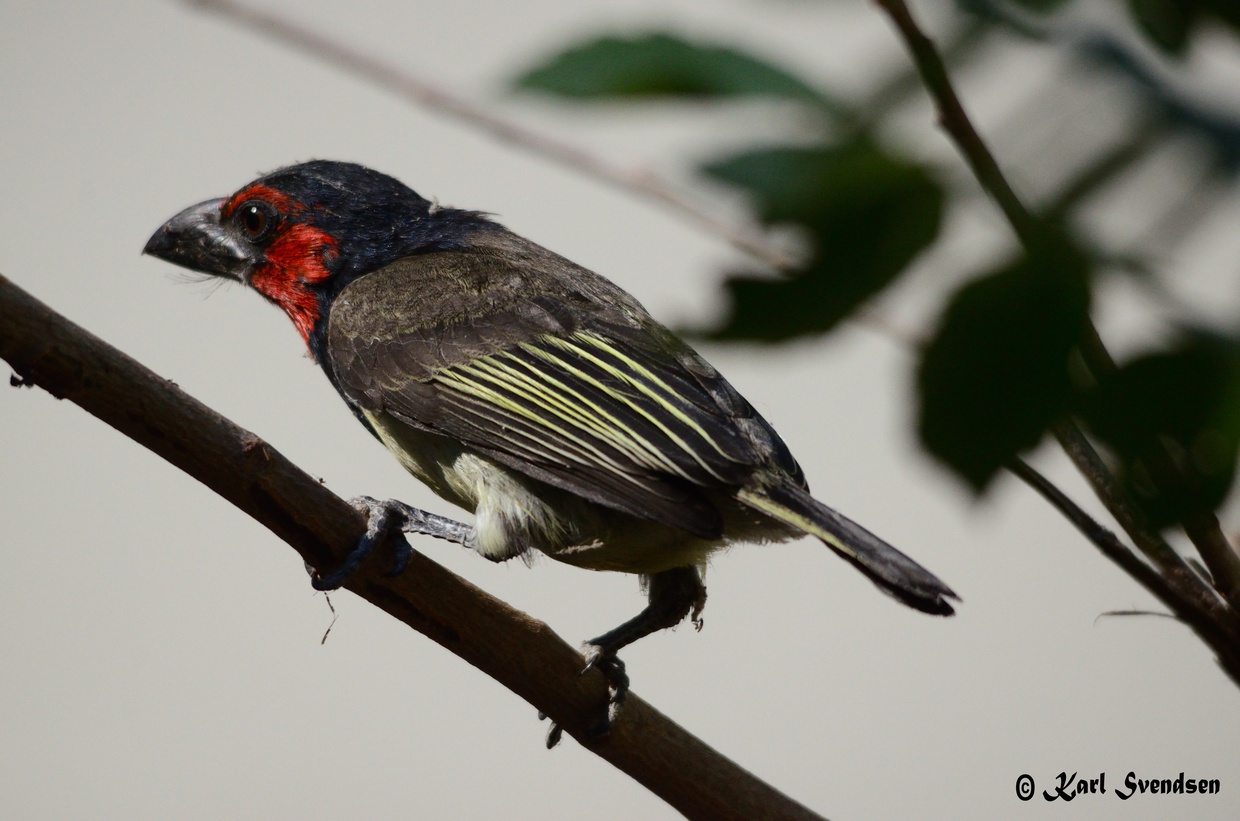 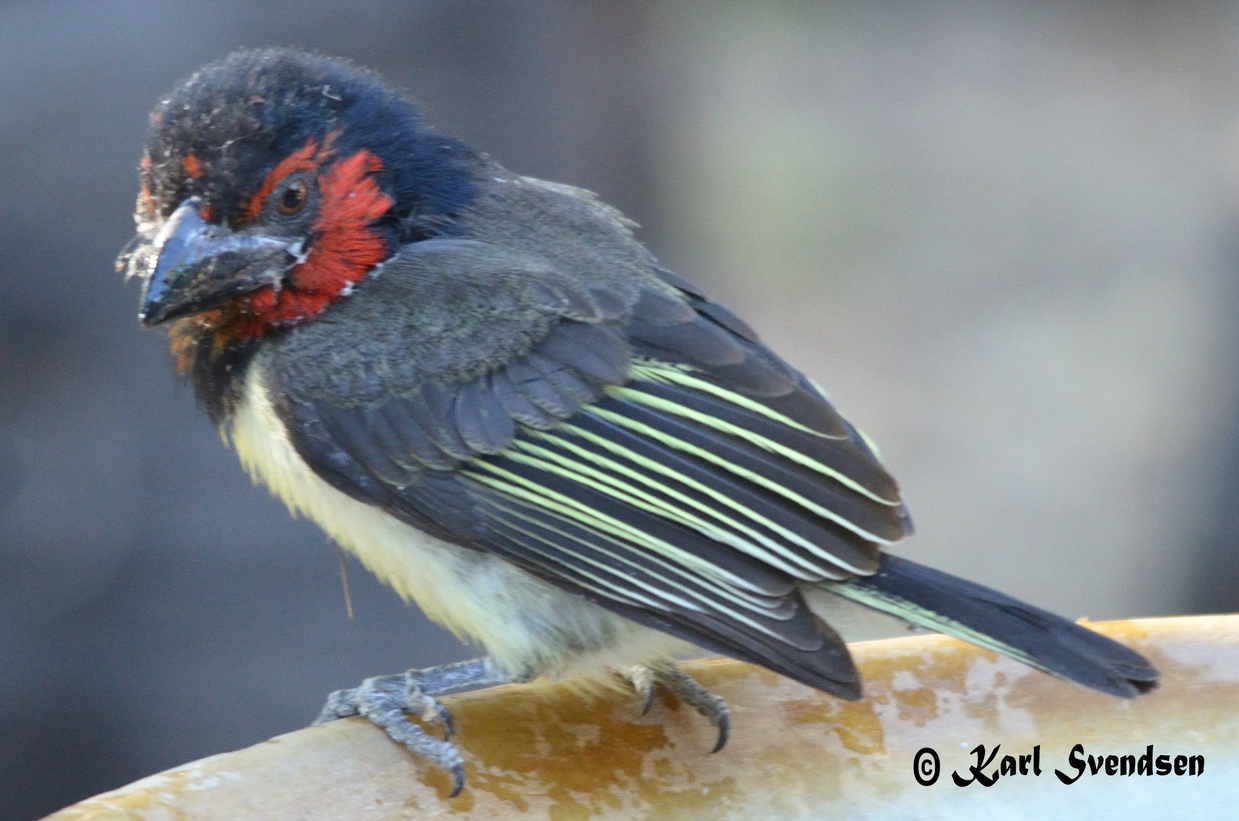 The very much alike Brown-breasted Barbet, with a brown breast collar, a whiter belly and a lighter coloured bill is also found around Kijongo, we do not have a photo as yet, but are working on getting one. 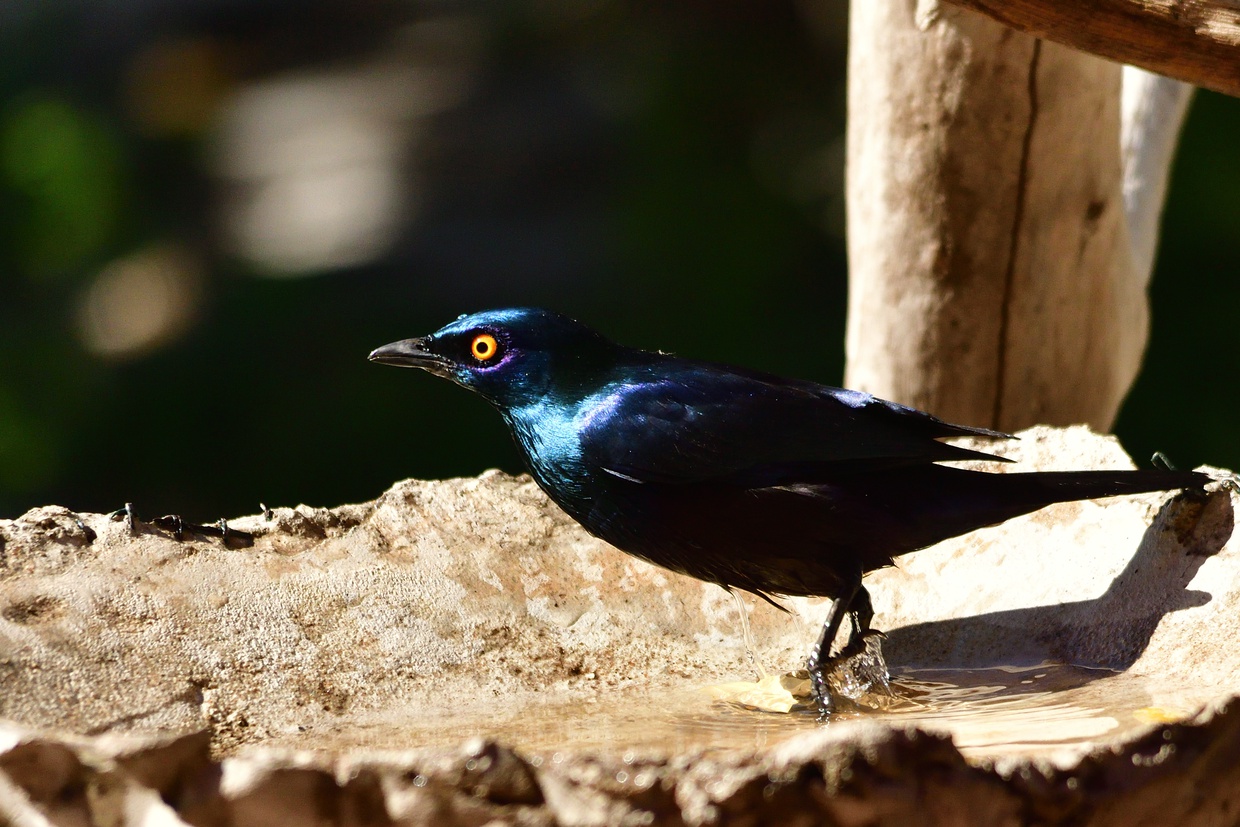 As East African starlings go, the black bellied starling is one of the smaller starlings at around 18cm. The belly is a dark purplish to black, with a dark green to dark purple gloss over the rest of the birds body. The eye is a yellow colour.

Normally seen in flocks. This starling is found along the coast and specialises in feeding in the coastal bush. 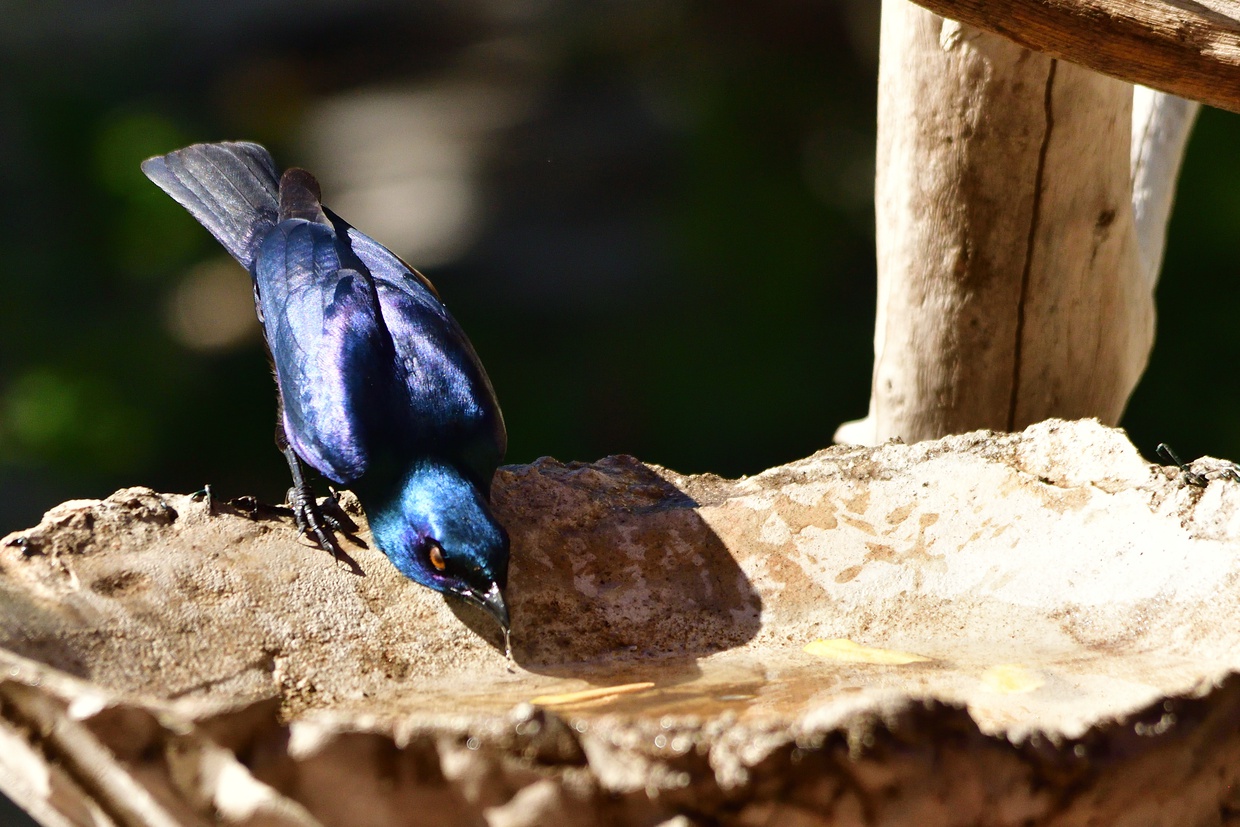 A mimic that calls for long periods. Its calls often mimic an oriol. To be honest, I spend a few day searching for the oriol that was calling in the Kijongo garden, only to find it was a black bellied starling. 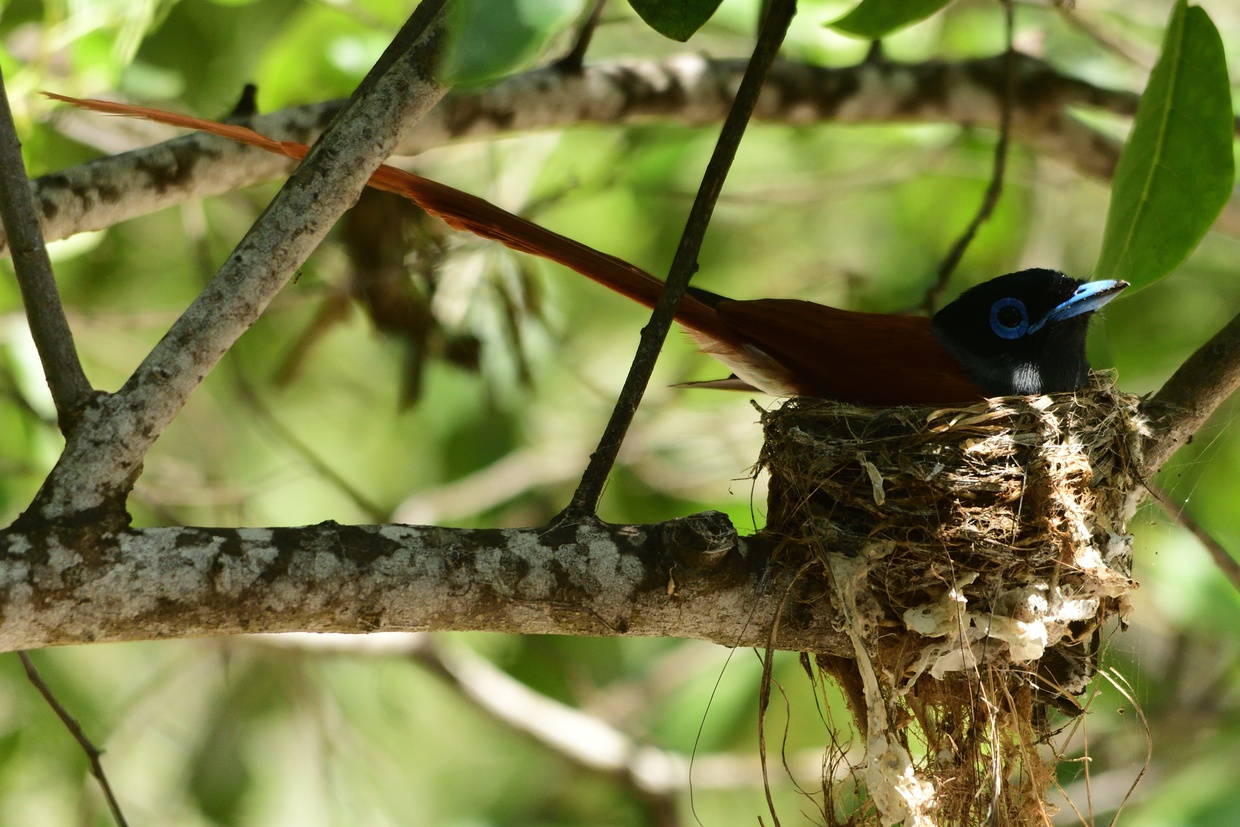 One of the more striking birds found in our garden. A smaller bird, with a chestnut back and tail, light grey belly and a blue black head. A blue bill and eye wattle, make this bird stand out among the flycatchers. Both sexes have fairly long tails, but during the  breeding season , the central feathers of the male tail almost double in size and can reach 30 cm in length.

A hawker hunter, as most flycatchers are, sitting on a branch and swooping down to catch many types of flying insects, including butterflies, moths, flying beetles, sometimes dropping to the ground to feed on ants. 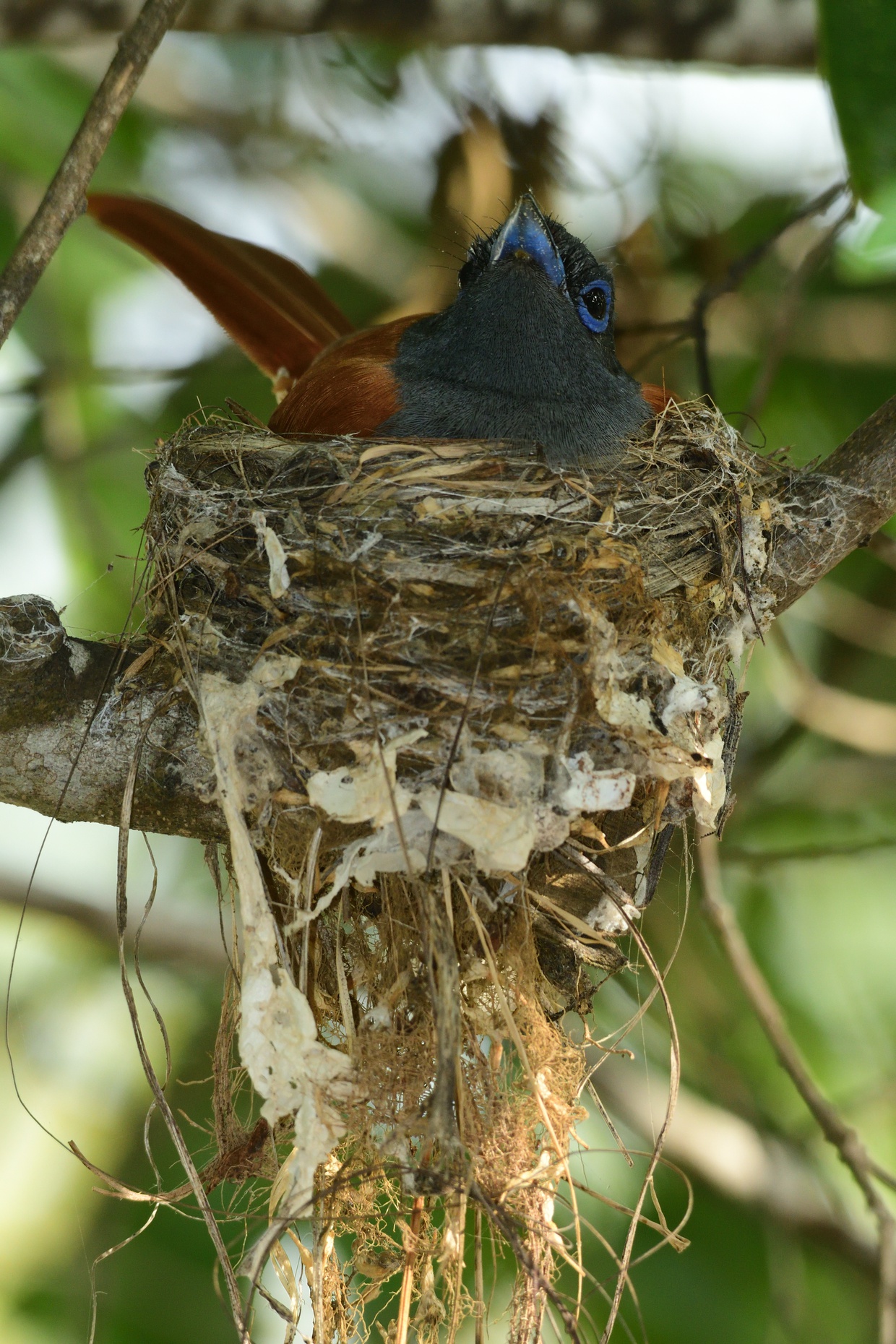 The nest is a finely crafted tiny cup nest. The material used starts with small branches and bark, then lined with soft grass, leaves, and animal hairs. The whole nest is held together with spider web. 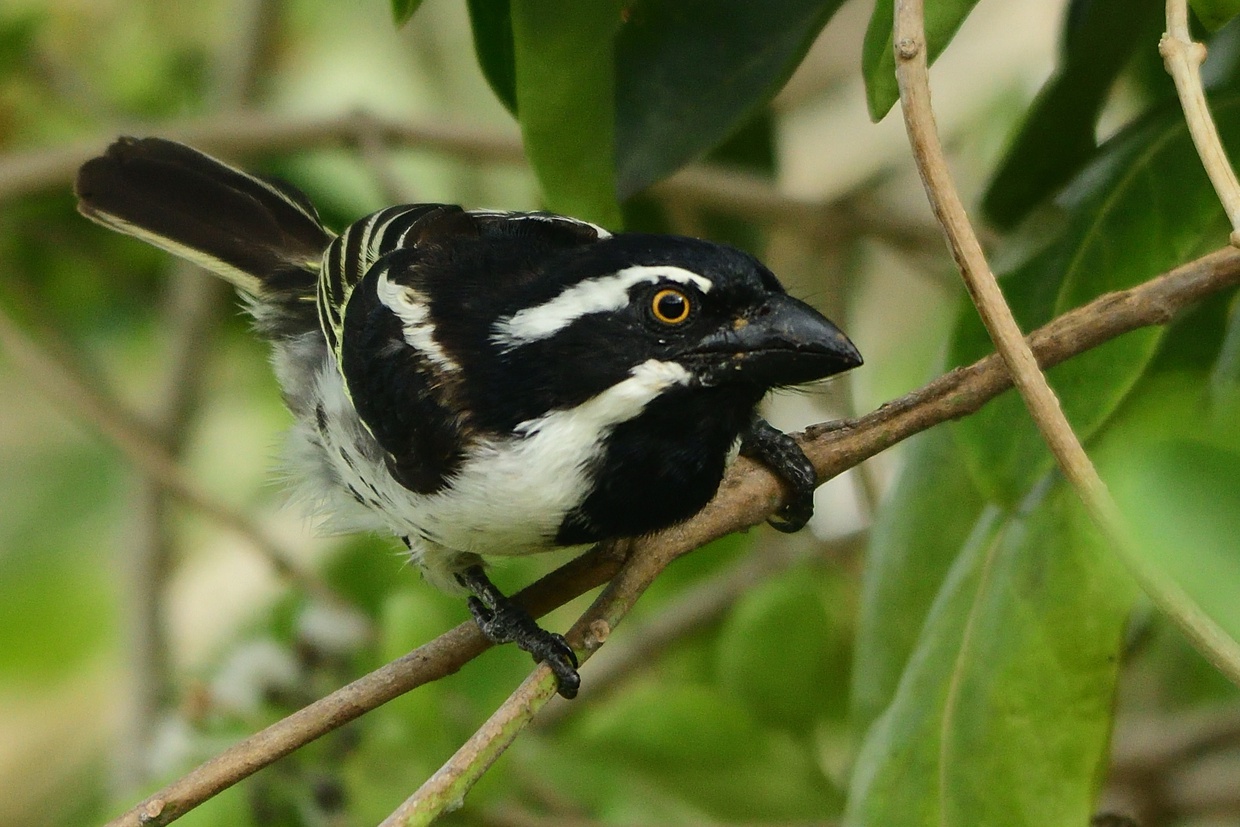 A well built medium sized white and black barbet, distinguished by spots on the side of its belly and a black throat triangle. The only barbet in the area to have a pale yellow eye. Twin white bands on the head, above and below the eye are very prominent. 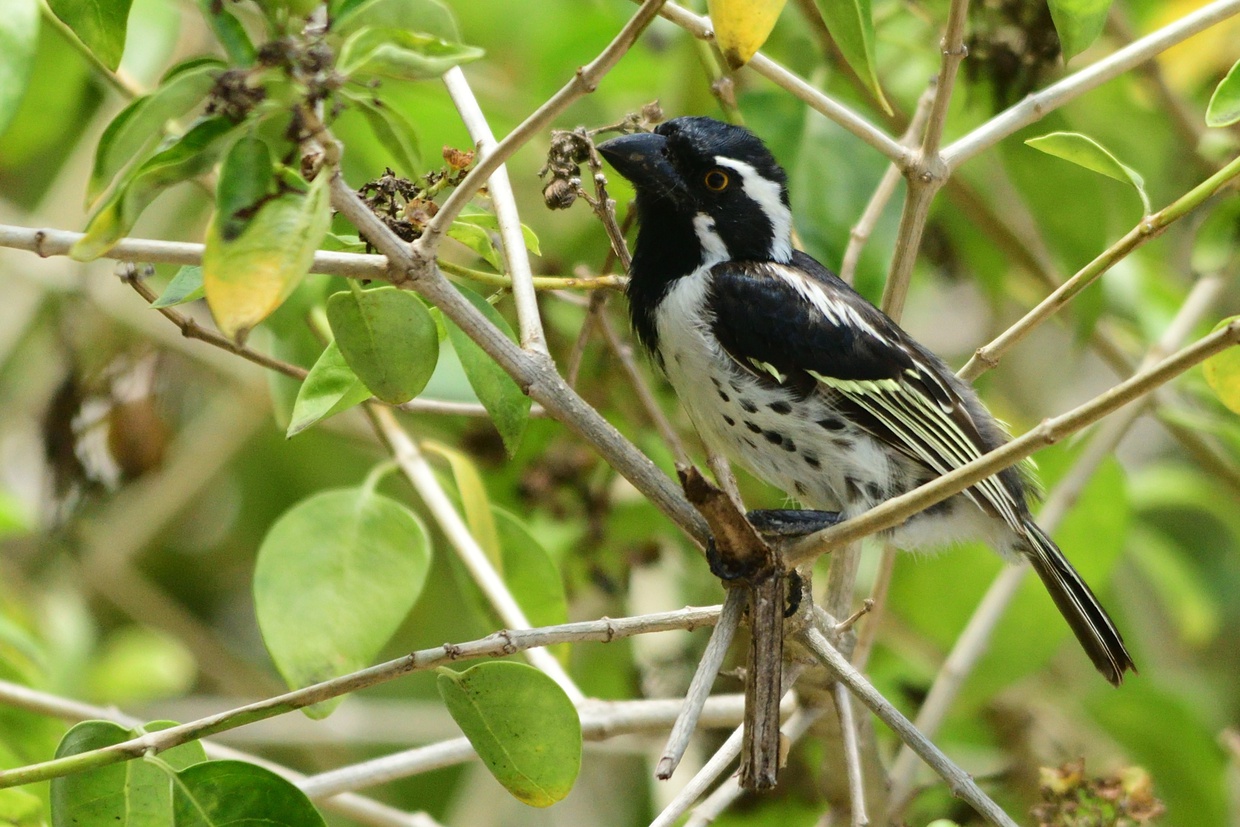 A fruit and berry eater, it will supplement its diet with insects. 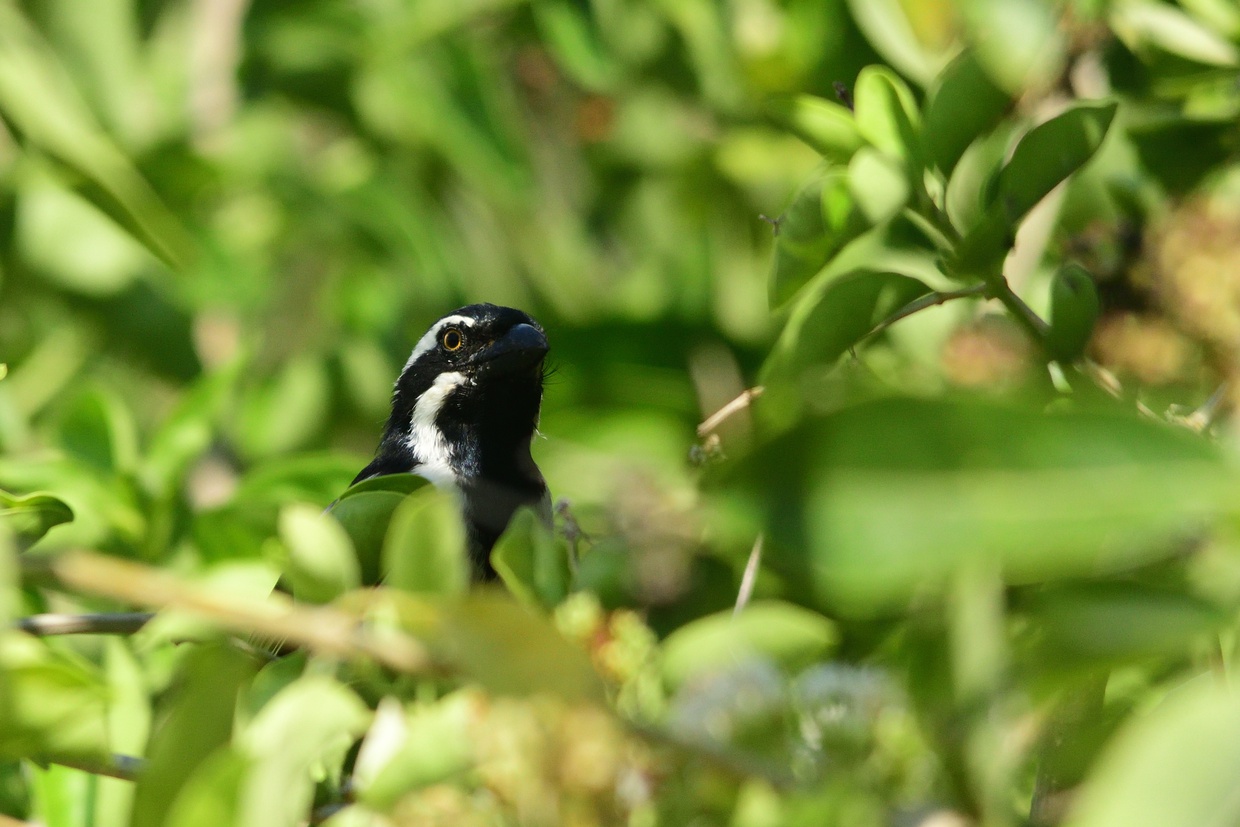 Not an easy barbet to see as it is normally deep in lush bush. According to most of the bird literature we have, Kijongo is outside this barbets normal range. We have seen this little barbet on numerous occasions feeding on berries at Kijongo.