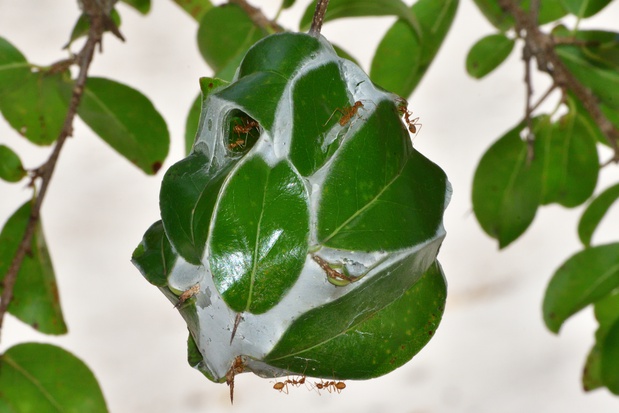 As you walk around the gardens at Kijongo Bay Resort, you may be fortunate enough to see some strange nests amongst the leaves, these nests are made by weaver ants.

We were quite intrigued by these nests, and so did some research and found them to be very interesting, and thought we would share this info with you.

Weaver ants are distributed in the Afro-tropics in a broad band along the equator. They are closely related to another species, O.smaragdina, which is found in Australasia, India, Sri Lanka and southern Asia. 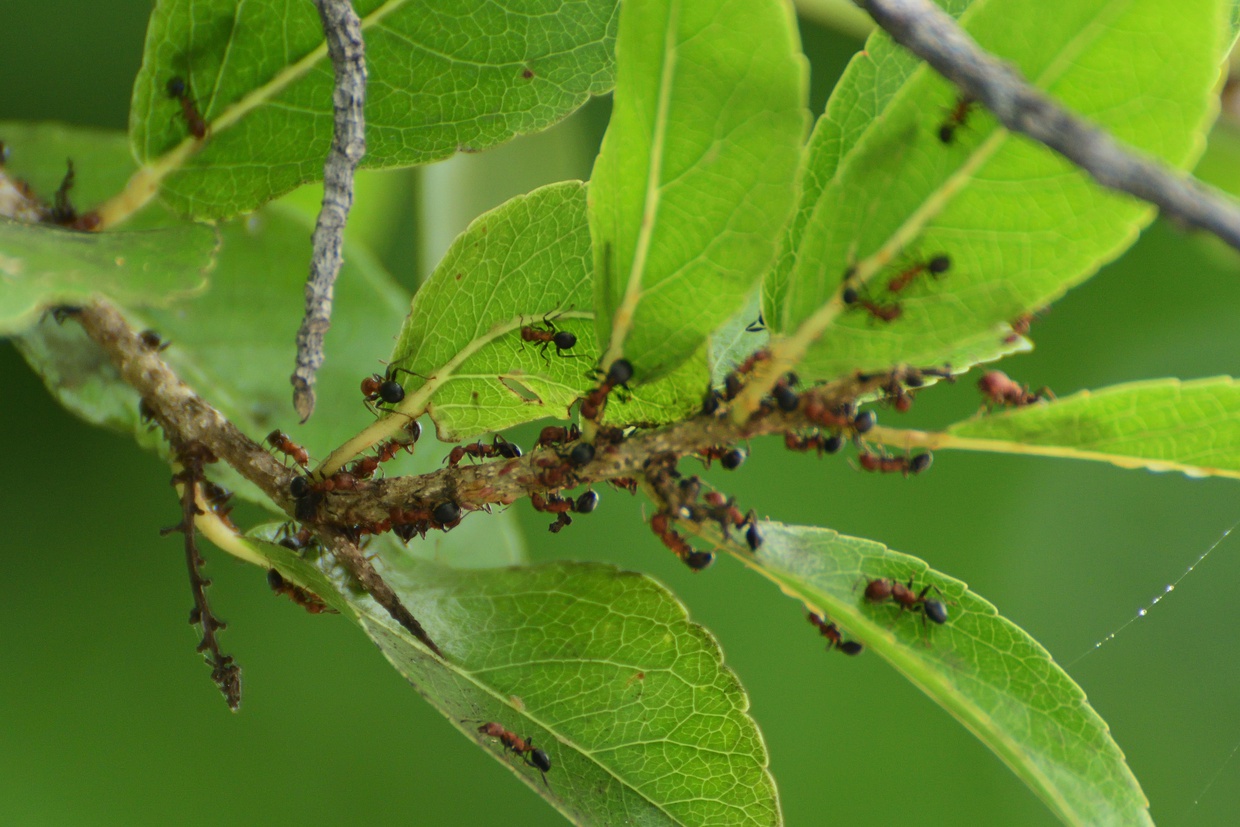 Weaver ants are completely arboreal, and are known for their extensive colonies and nest building abilities. Nests are made by weaving together leaves (hence their name) and colonies have been recorded to contain over half a million workers with nests that span over several trees.

A colony is made up of a queen, workers and major workers.

Queen. A weaver ant queen is around 20 to 25 mm, and is the largest member of the colony. There is only one queen per colony, and she is the mother of all the ants within that colony.

The queen starts as a mated female ant, who initially lays her first clutch of eggs on a leaf. She protects and feeds her larvae until they grow into worker ants. This first batch of worker ants then make a nest to protect their queen, who proceeds to lay more eggs. The workers also assist the queen to tend for her brood. As the worker ant population increases, so does the number of nests within the colony.

Worker ants are the little guys at around 5 mm. Workers look after the brood, and "farm" scale bugs, for honey dew. 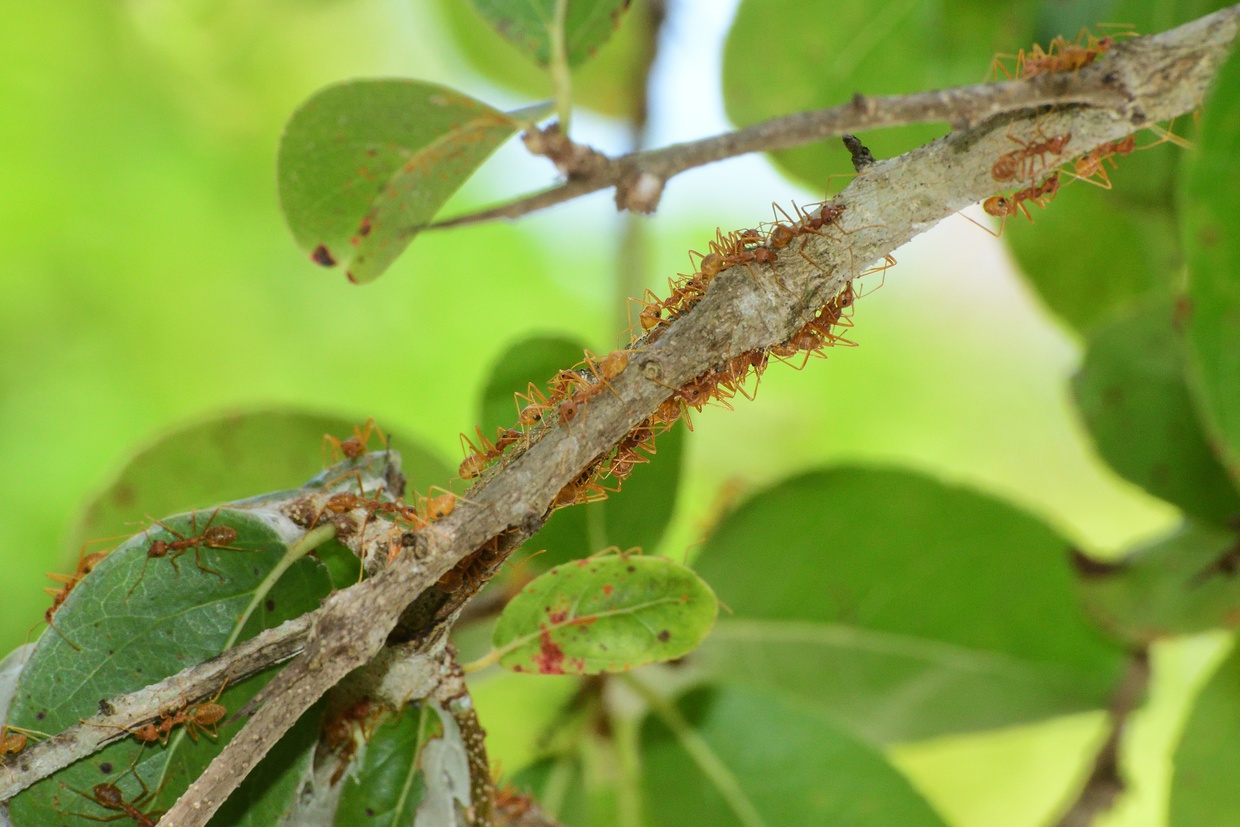 Major workers are a little bigger at 8 to 10 mm. These are the foragers, hunters, nest builders and protectors of the colony. They have strong mandibles and can spray formic acid as a defence mechanism. These ants are aggressive and respond quickly to any disturbance to the nest.

Weaver ant workers have been recorded as being able to support over 100 times their own weight in their vice like mandibles. 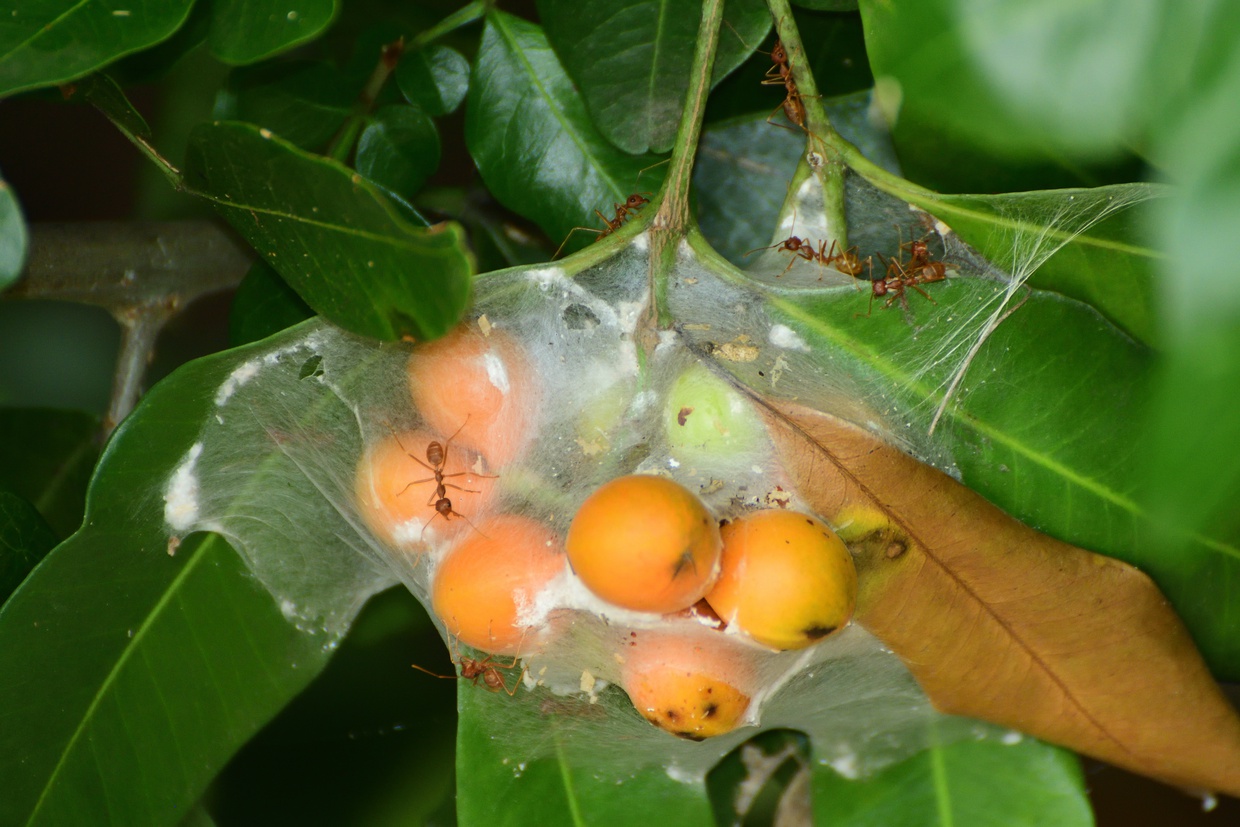 The ecological success of weaver ants is basically down to one main reason, their ability to build nests from leaves using communal work.

The intricate nests made by weaver ants are built by the major worker ants. The initial nest is first tested by a small group of workers pulling on a leaf, if it fits what the ants are looking for, then more workers are called in to help.

The workers link bodies together to form a chain to pull in distant leaves, often there are multiple chains working in tandem. Once the leaves have been pulled together, more workers arrive with larva from an existing nest, which is carried in the workers mandibles. The workers tap the head of the larva to produce silk. The workers then maneuver the silk, in such a way to bind the leaves together. The larva can only produce small amounts of silk, so after a short time it is returned to the brood nest and another larva takes its place.

The nest can be a few leaves bound together, to nests that measure 500 mm in length.

Nests are actively defended against intruders or even accidental disturbance. The ants sound the alarm by knocking on the leaves from inside the nest, making an audible warning sign. The ants then swarm onto the outside of the nest and start releasing formic acid into the air as a chemical deterrent.

Weaver ants have a panful bite, but to make it worse, they spray formic acid onto the bite site making the bite more painful. 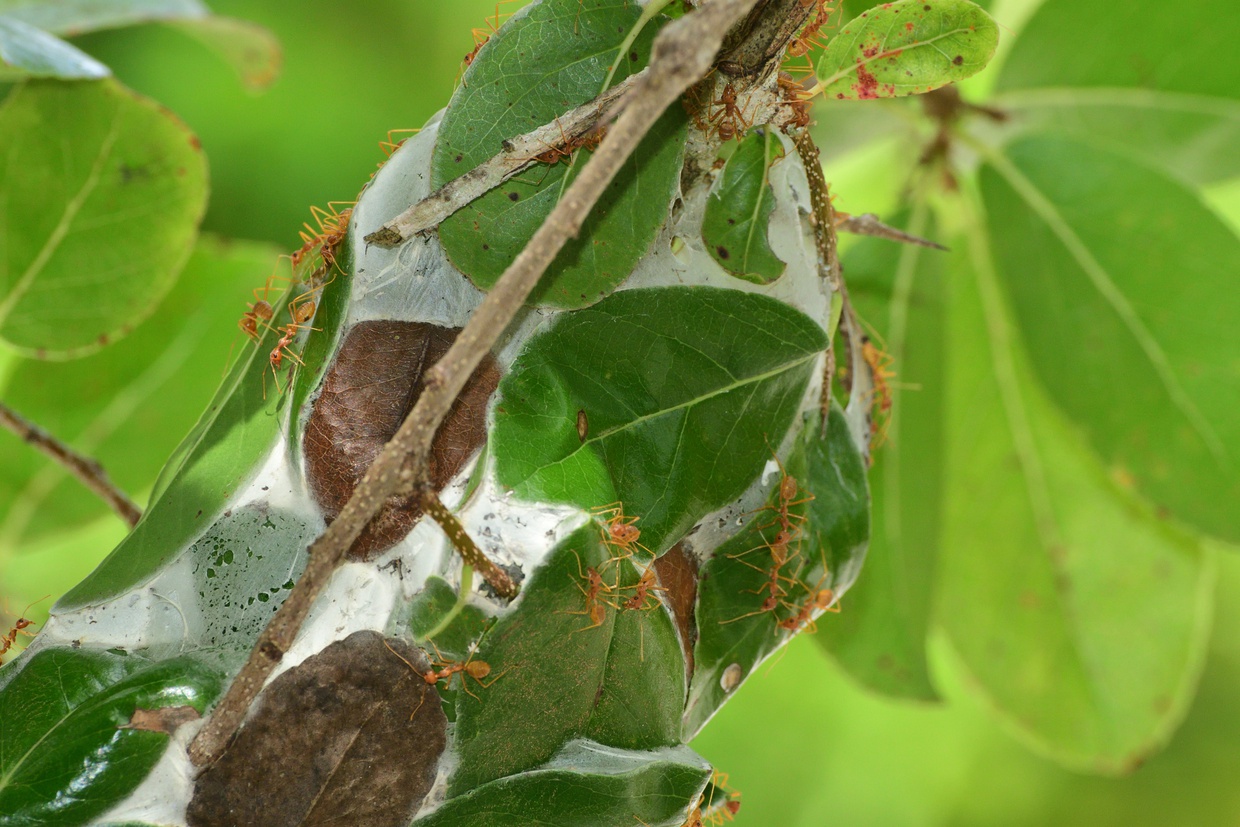 Weaver ants eat a lot for their size. Worker ants are continuously hunting and killing small insects that are unfortunate to stray close to their nests or tree. The insects are an important protein source for brood development. Weaver ants not only actively hunt on their own tree, but send out hunting parties on the ground surrounding the tree.

Workers also “farm” scale insects inside the nest, which are milked for honey dew. 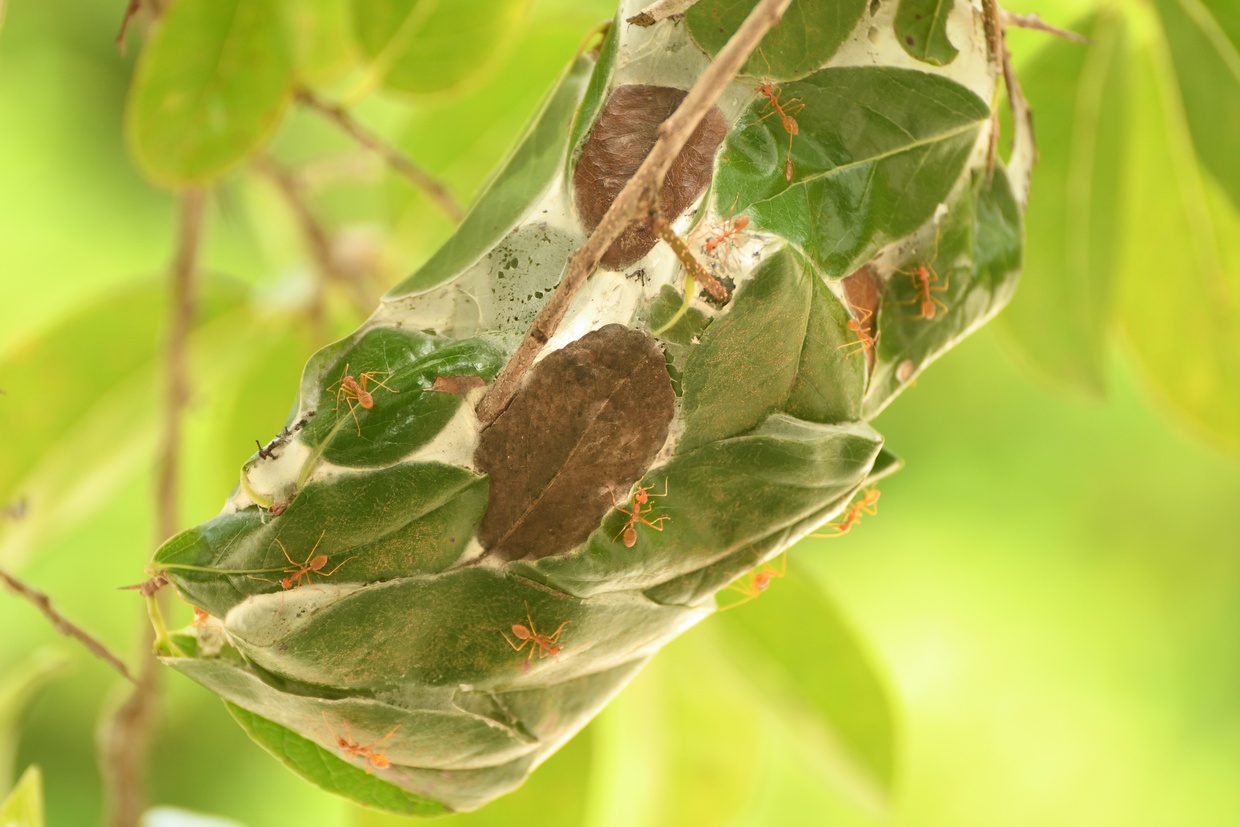 Weaver ants have been traditionally used in biological control of insects in South east Asian countries and China, on citrus orchards, as far back as 400 AD.

Weaver ant husbandry is now practiced in quite a few countries, where farmers provide food, shelter, and even string ropes between trees for colony expansion. This practice has yet to occur in Africa, but a lot of the cashew nut trees along the coast in Tanzania have large colonies of weaver ants living in them.

Weaver ants are occasionally used by some species of birds; the birds pick the ants up and place them between their feathers. The ant does not like this and will try and defend itself, by releasing formic acid, this acid deters parasites on the bird. The ant normally escapes unharmed, just a bit traumatized.

In some countries the weaver ant larvae is a valuable delicacy and is harvested in large amounts.