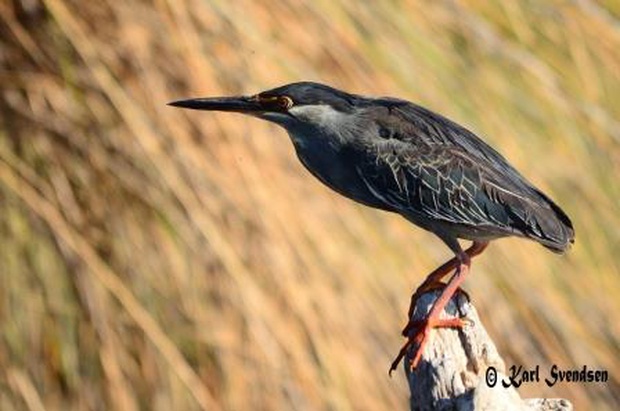 Common birds sighted on a Kijongo kayak trip or river cruise on the Msangazi River. 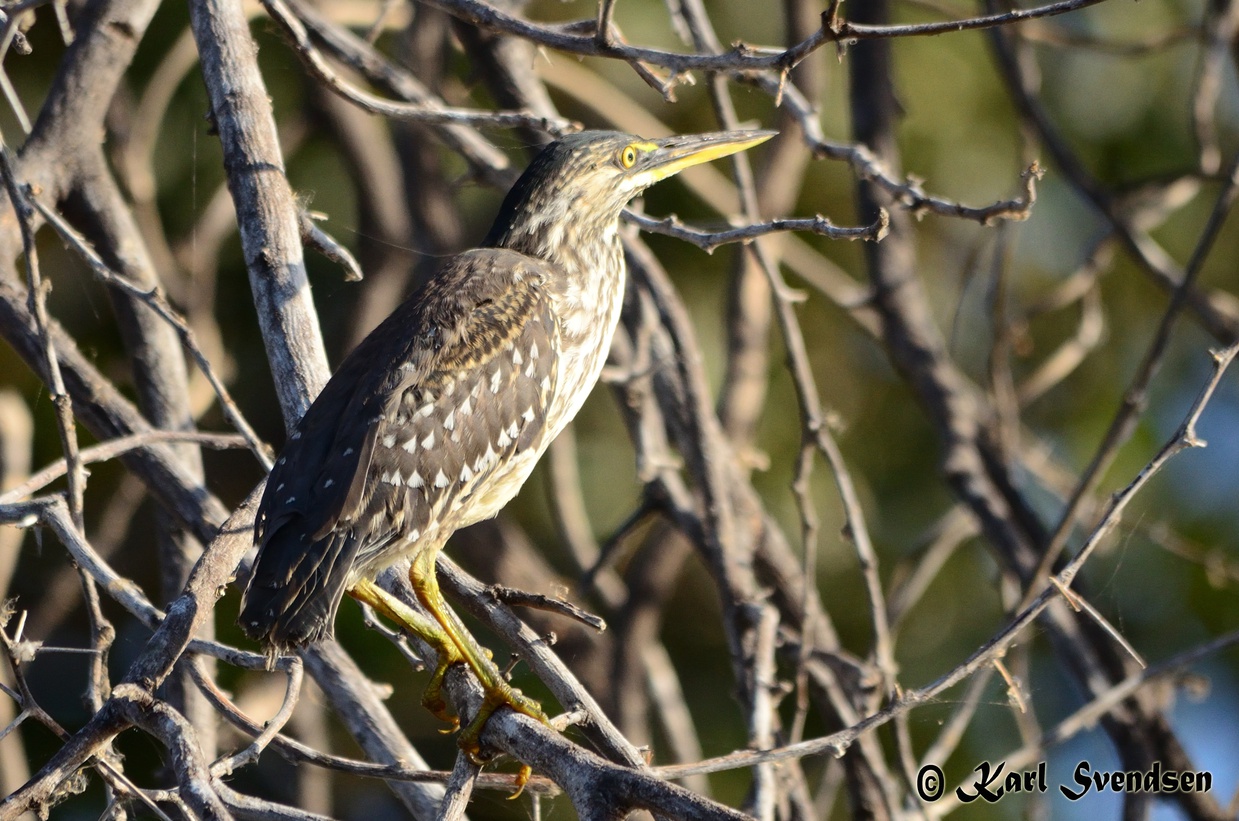 Also known as a little heron, mangrove heron or by its old name, a green backed heron. Normally a very secretive bird, but we have had some great sightings in the mangroves. 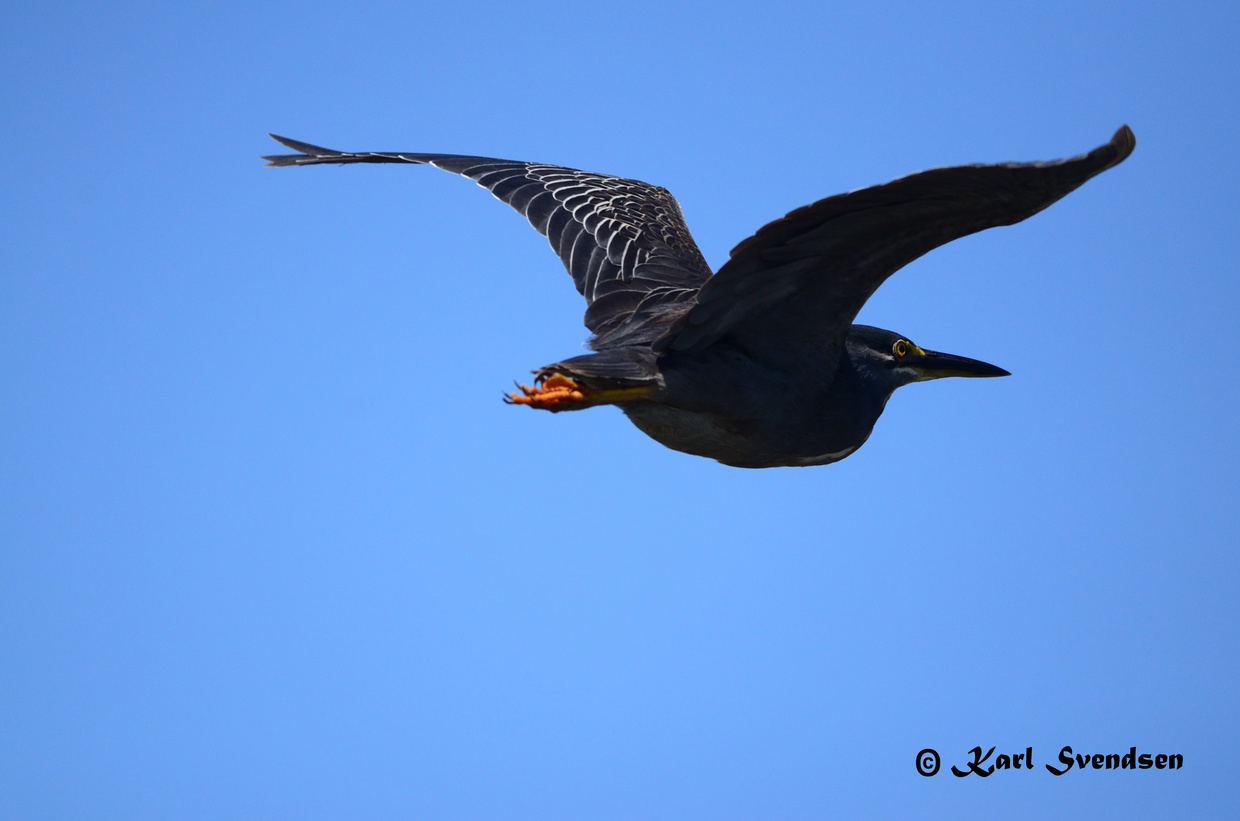 Adult Striated herons have white underparts, blue to grey back and wings, with a black cap and short yellow legs.

These are ambush predators and will stand motionless at the water’s edge, waiting for its preferred prey of either small fish, frogs or water insects to swim past. Striated heron is one of the first aquatic birds that has been observed using “tools”. They have been observed dropping leaves, small stick, or even feathers onto the water’s surface, to float and attract inquisitive fish, which are then caught and eaten. 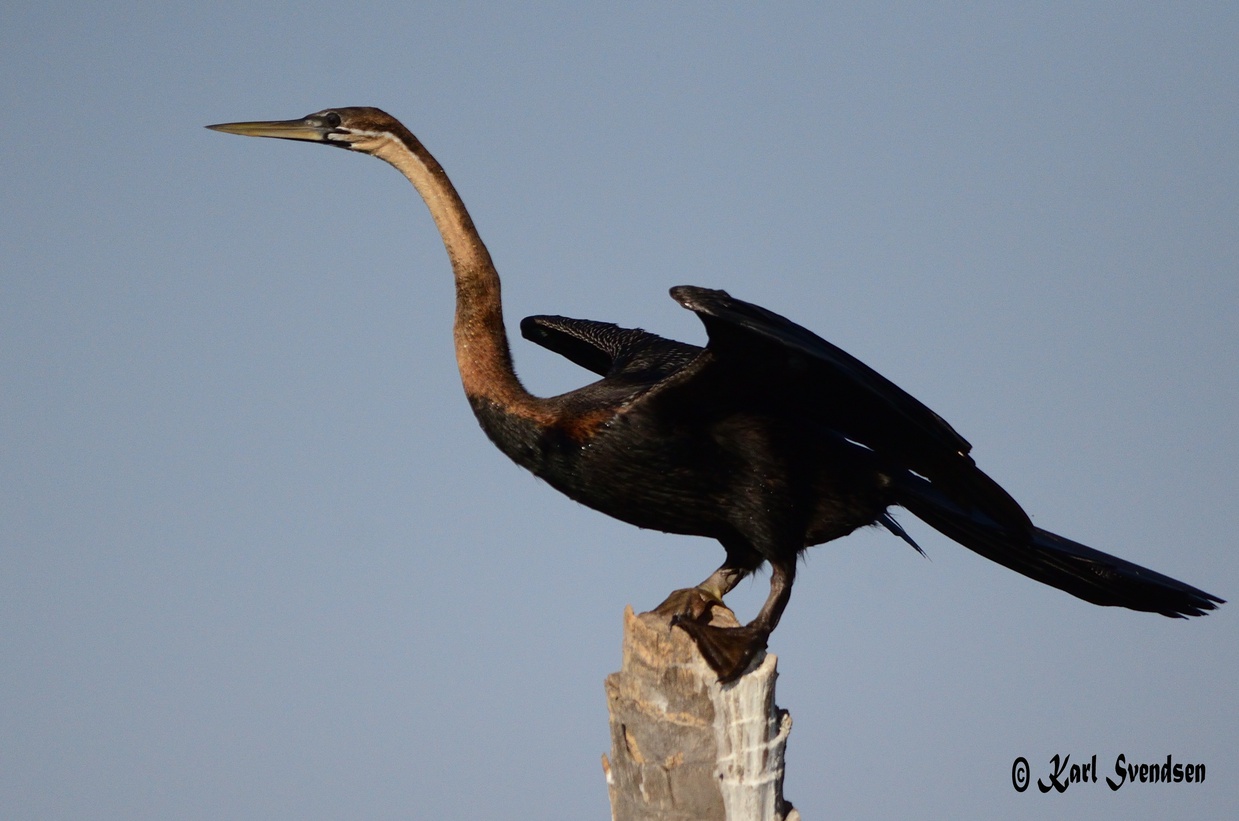 Darters are often called snake birds, due to the way they swim with their body submerged and only their necks exposed, resembling a swimming snake. The African darter will sometimes be seen roosting and drying its wings, with wings outstretched, towards the sun. This is due to a lack of oil in its feathers, unlike other birds, it becomes waterlogged and so needs to dry. 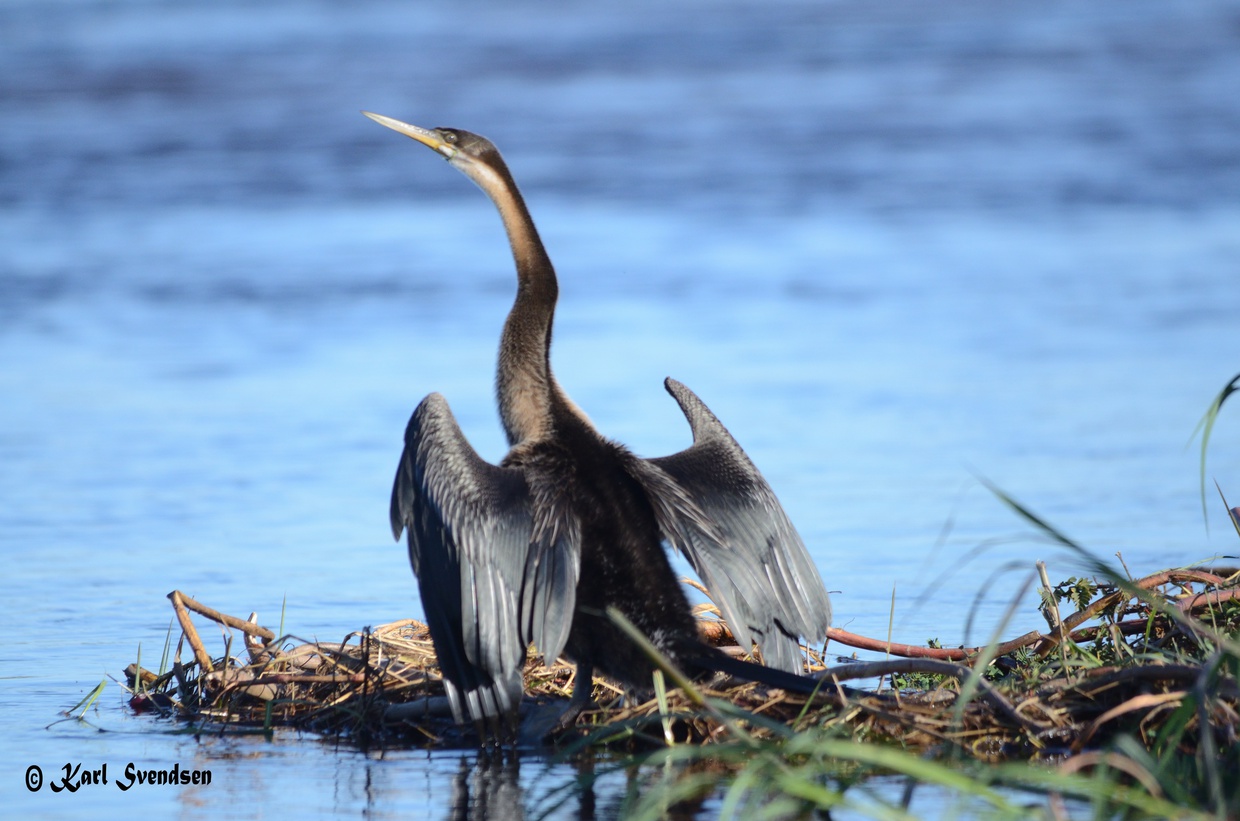 The darter is predominantly glossy dark in colour, with some rufous and white markings on the neck. The bill is sharp and is the main feature that distinguishes them from cormorants. 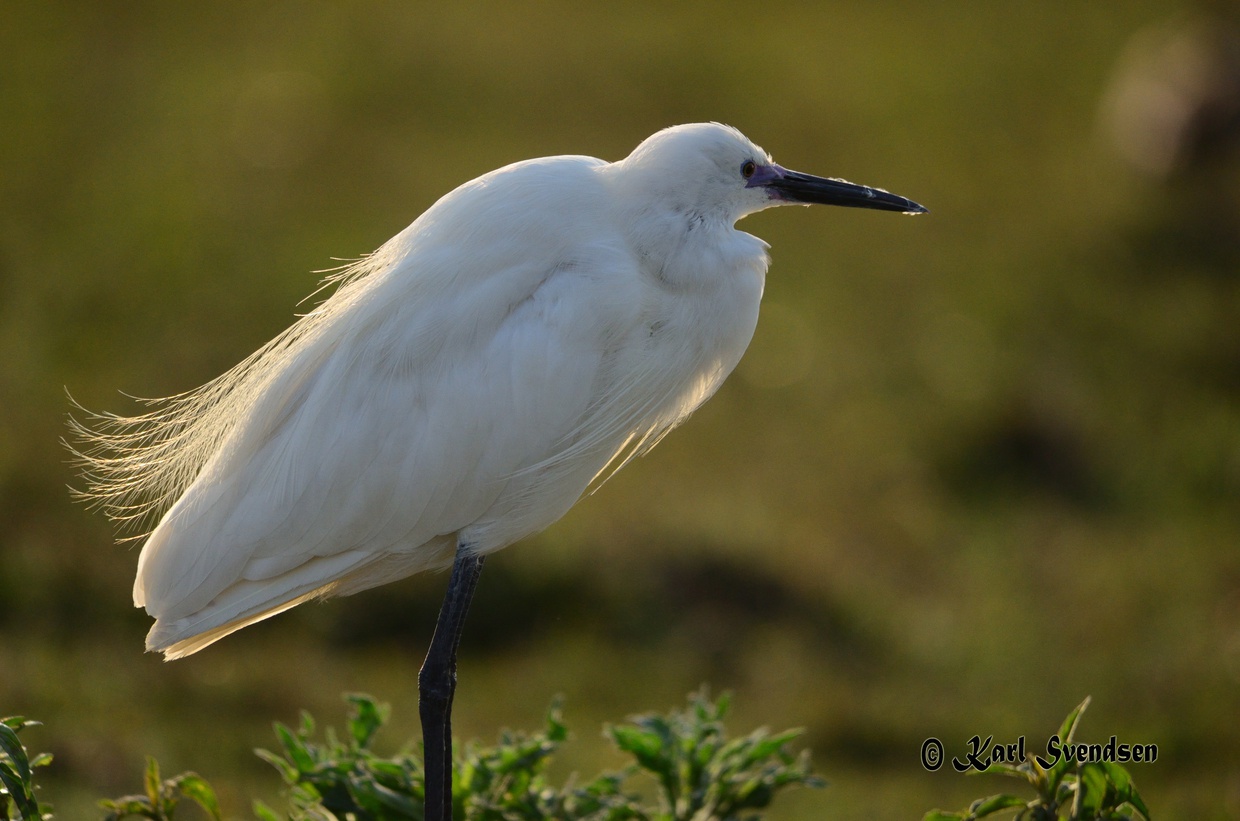 A very energetic feeder, this egret will actively chase fish in shallow water. Little egrets are often seen in large numbers at the estuary mouth, roosting in the mangrove trees. Little egrets are also seen feeding at low tide, on the beach, in front of Kijongo Bay Beach Resort.

Little egrets are around 55 cm in length and have white plumage, a black bill and legs. The feet are yellow. During breeding the adults have two long plumes on the nape (back of the head), that form a crest.

Little egrets are opportunistic feeders and will readily follow other birds, livestock and humans to feed on the disturbed animals. Their diet is very varied, from insects, ticks, fish, small reptiles, small mammals and crustaceans.

Little egrets were found in various countries in Europe, but is now extinct is many of the countries, due to hunting for their feathers for the hat trade in the 1800’s.

The largest of the egrets, at almost 1 m in length. The neck is often held in a kinked fashion.

The greater egret is distinguished from other egrets by its size and a distinctive dark gape that extends beyond the eye (a dark line extending from the beak, towards the eye) plus it doesn't have yellow feet, like most other egrets. During breeding the yellow bill will turn black.

The greater egret hunts in shallow water, both on the tidal flats and in the mangroves, feeding mainly on fish. It will also feed on small mammals, frogs, insects and small reptiles. The greater egret will use its bill to spear a fish to catch it.

The greater egret was hunted extensively in the 1800's for their breeding plumage. The long feathers were used in the hat trade, to make ladies hats fashionable. 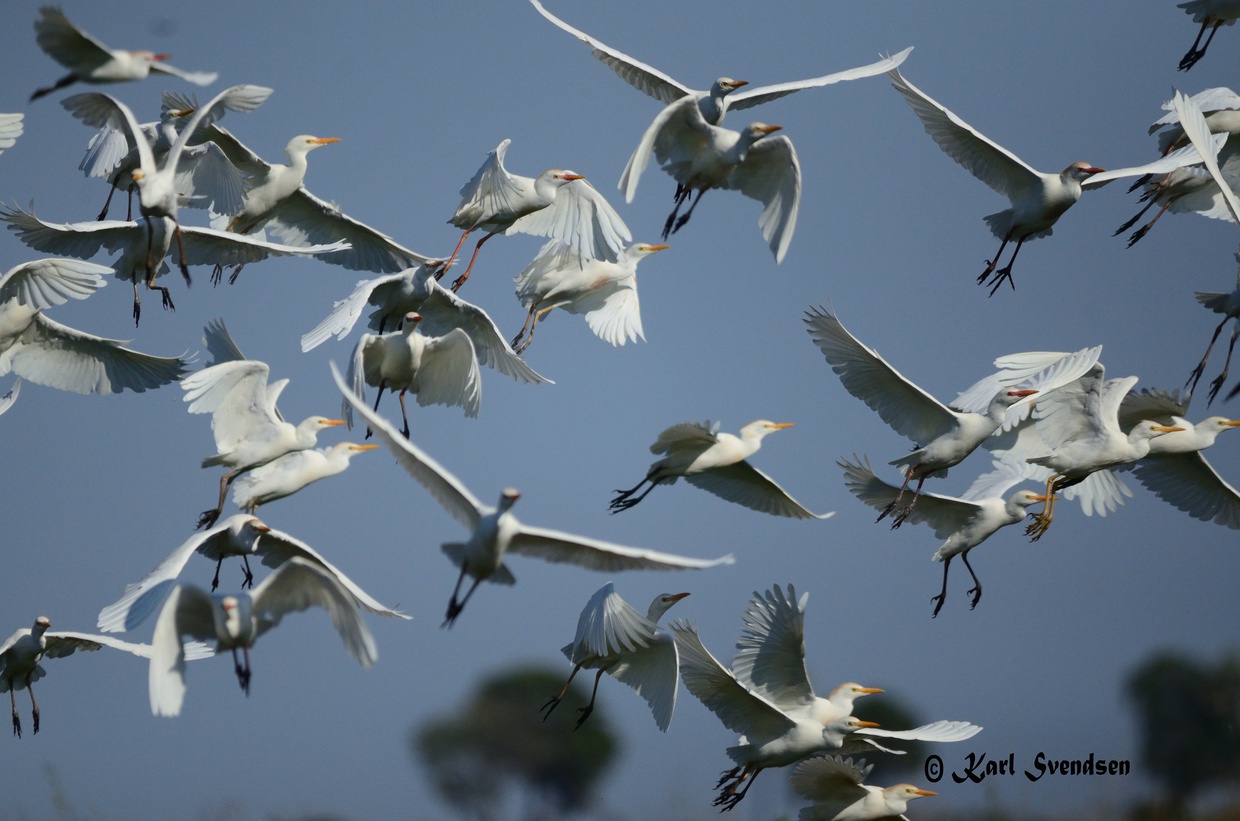 Often found close to the mangroves and will roost late afternoon on the fringes of the mangroves. Seen around herds of cattle and a sighting of these egrets is an almost certain in Saadani NP, due to their association with big game. With cattle egrets being insectivore, they use the cattle or big game to flush up the insects out of the grass, making hunting that little bit easier for them. The cattle egret is almost always seen around buffalos in Saadani NP. 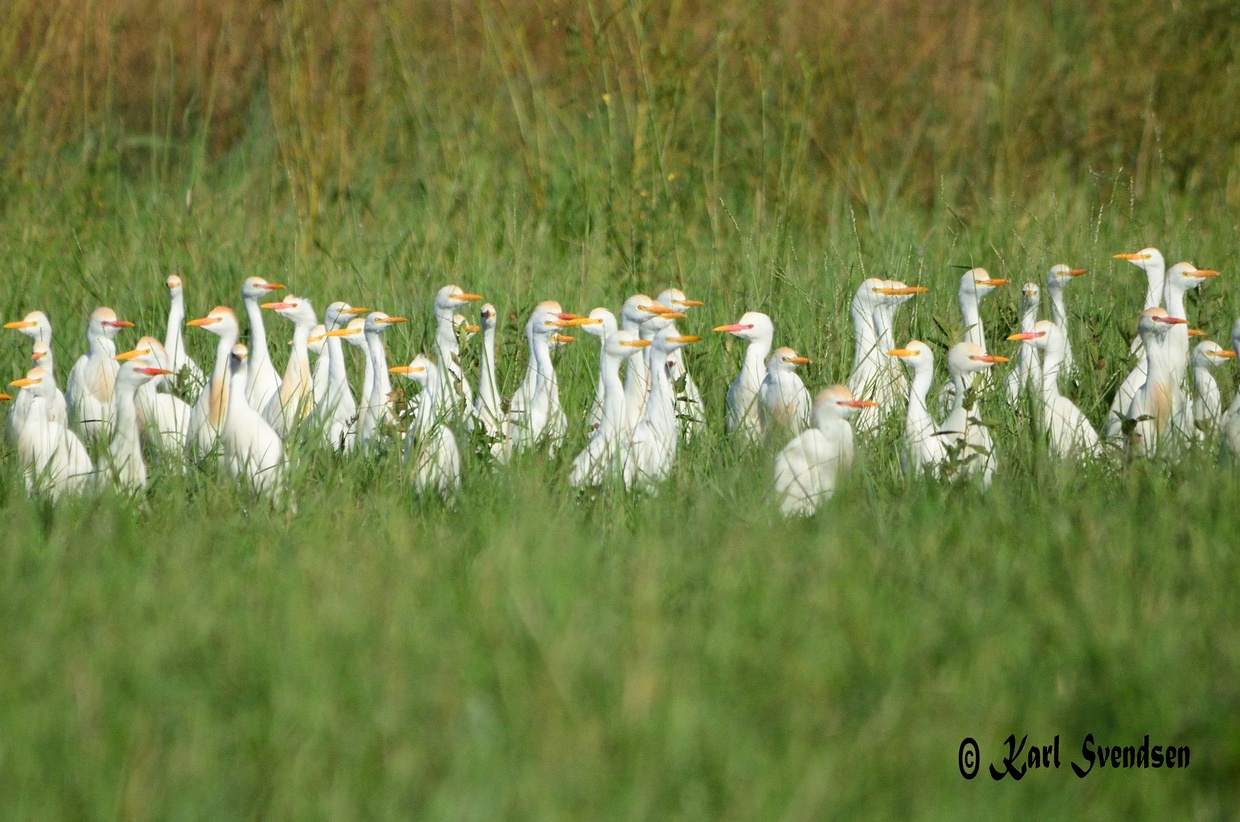 Juveniles have a black bill, with adults having a yellow bill. Cattle egrets are white in colour, with a buff plumes on crown , mantle and breast showing during breeding. Cattle egrets are one of the smaller egrets at around 50 cm in length.

Cattle egrets are highly gregarious and are found in large flocks, both on the ground and when roosting 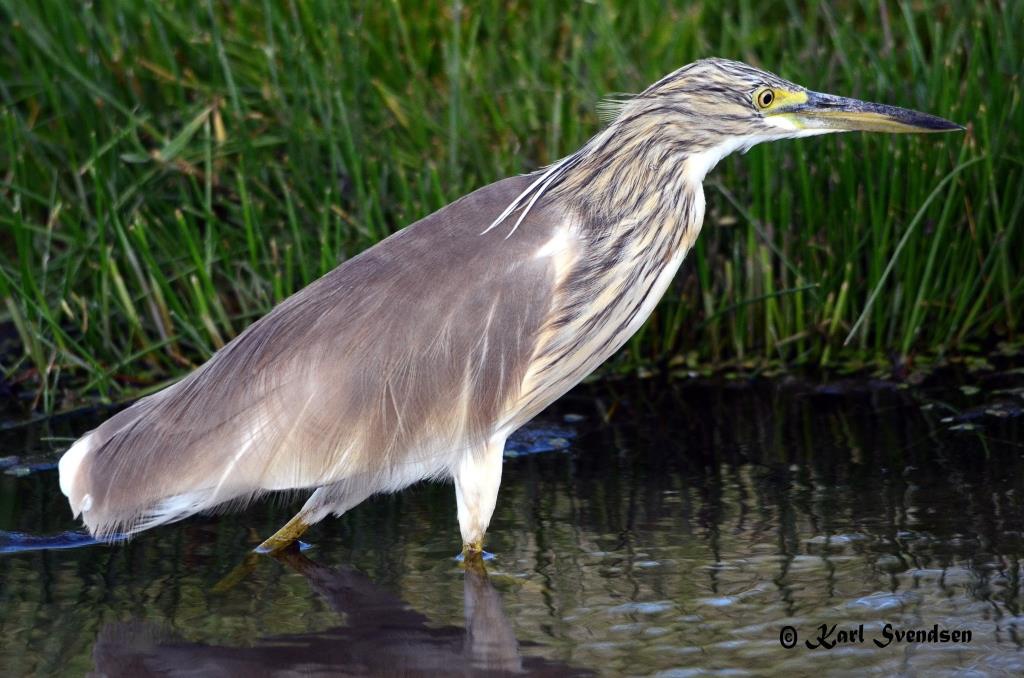 A small heron, well as herons go, at around 46 cm in length. The Squacco heron is light brown or buffy brown overall, with white flanks and pink legs. In flight this bird has bright white wings and tail. In breeding colours, this bird presents a blue bill and dark streaking on the head. 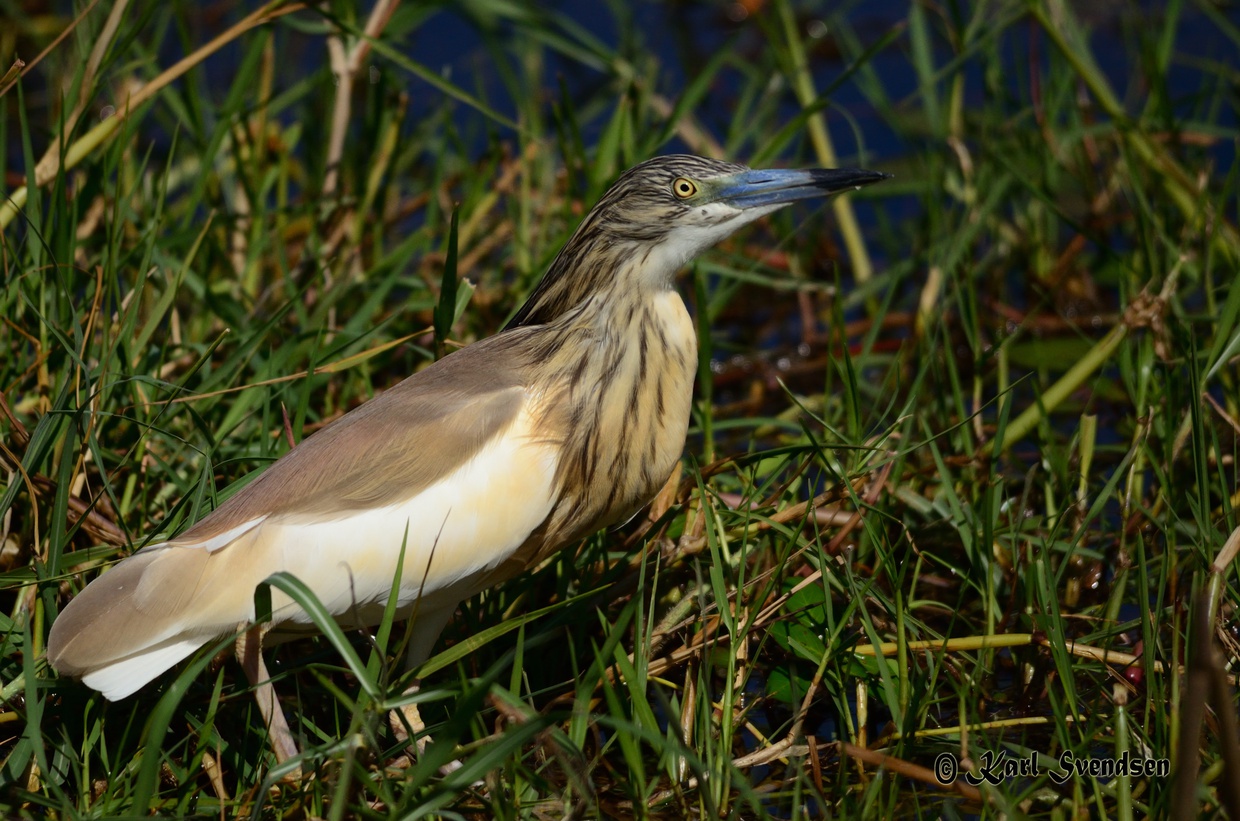 The Squacco is normally spotted hunting in a hunched stance at the water’s edge. They will remain in a “frozen” state for many minutes, if they think they have been spotted or if hunting, otherwise, they move very slowly along the water’s edge when searching for prey.  They are found singularly or in small groups. 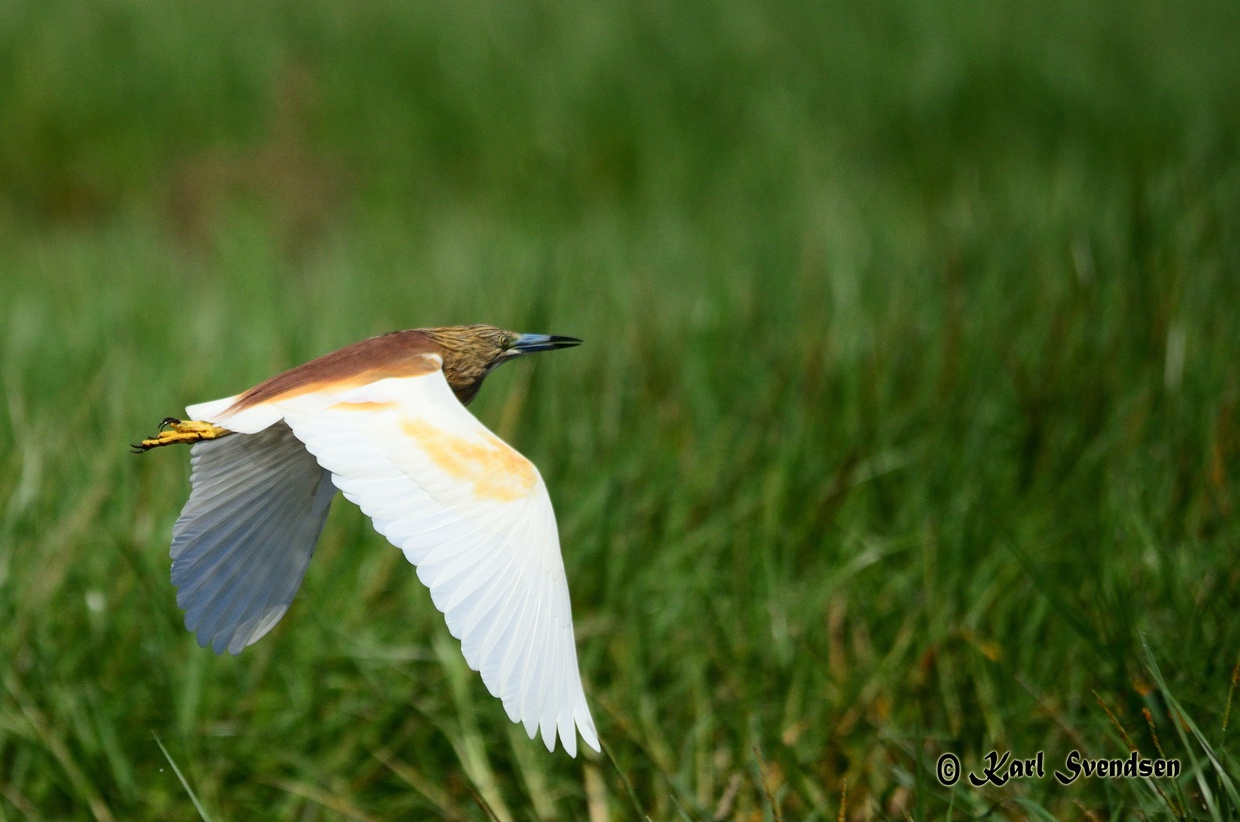 The Squacco heron has a diet very similar to other herons, small fish, frogs, aquatic insects and crabs. 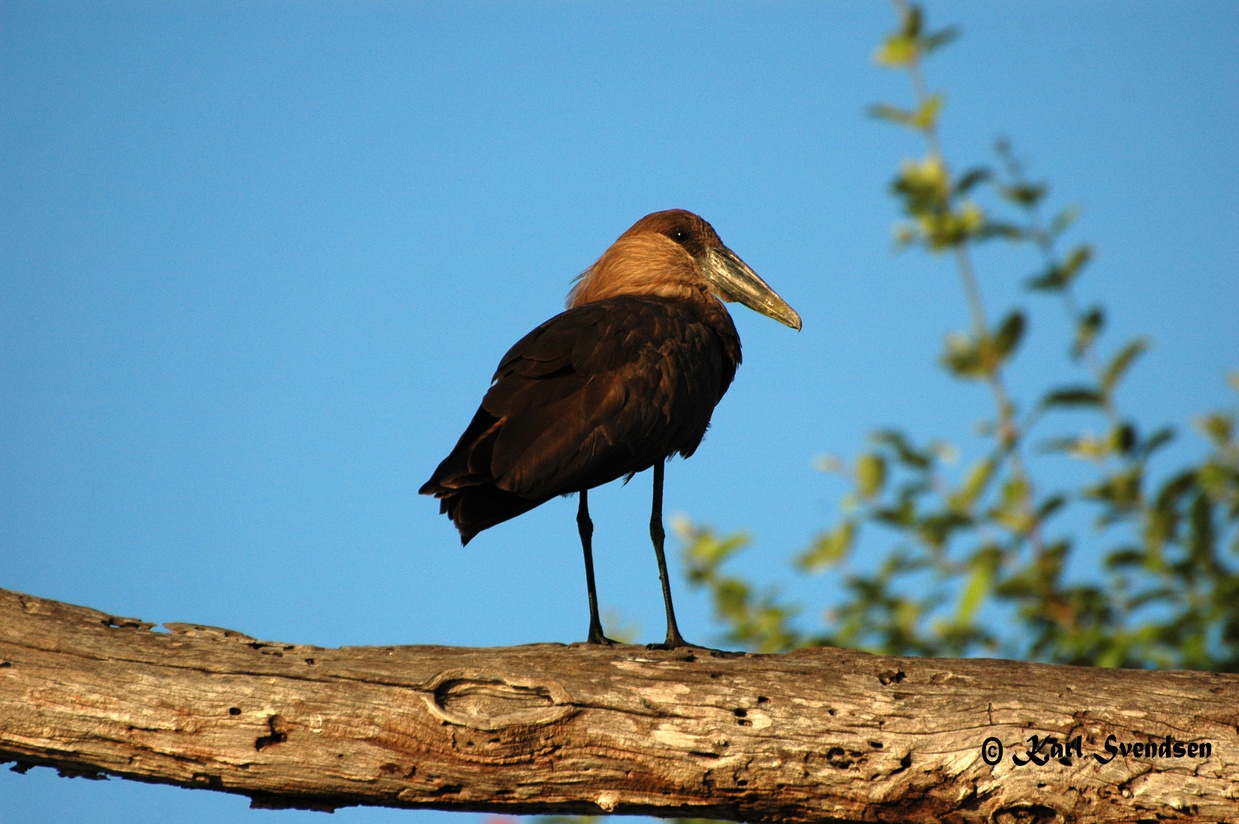 The hamerkop is one of the birds featured in folklore in many African countries, with beliefs that it has magical powers still in practice today. Hamerkops have been called the messenger of death, a lightning bird, or even a leprosy bird, with these ailments coming if the hamerkop crosses your path or if their nest is interfered with. Keeping this in mind, our Kijongo Bay hamerkops are quite peaceful and not interested in folklore.

The hamerkop is a medium sized water bird, at around 56cm in length. It is a uniform brown in colour with a barred tail. The bill is relatively long in comparison to the bird’s size, at around 8 to 9 cm in length, black in colour. The shape of the head is distinctive, looking like a hammer, which leads to it name from Afrikaans meaning hammer head.

The hamerkop have a carnivorous diet, consisting of fish, shrimps, insects, amphibians, and rodents, hunted in shallow water.

The hamerkop is well known for the size of the nests they build. Both sexes take part in building their nests. The hamerkop nest is up to 1.5m across, possibly the biggest nest in comparison to the bird size. The birds build a few nests over their life span that they use for many years. The nests are also used by different species, owls and geese, sometimes at the same time as the hamerkop.

The hamerkops, around Kijongo Bay Beach Resort, can be seen in the mangroves and fishing on the tidal flats.

Kingfishers are seen on almost every trip down the river. But that is on another page, for another day, as there is such a wide variety out there.