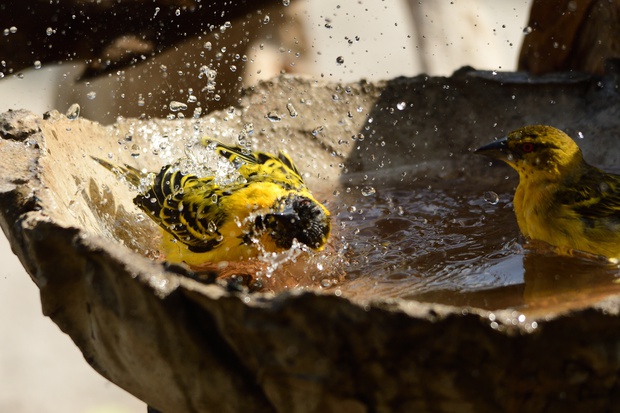 With most of the plants, shrubs and trees at Kijongo Bay Beach Resort being indigenous, the bird life thrives in our gardens.

We are actively trying to attract birds to the garden by having a couple of birds baths around the garden and planting indigenous flowering plants. The flowering plants and bushes not only feed the nectar feeders, like the sunbirds, but also attract insects, that are fed on by the insectivorous birds. The birds and insects play a vital role in pollination of the garden vegetation, as well as some of our foodstuffs and crops.

With our Kijongo Bay Beach Resort “garden” extending onto the beach, and with the beach extending out onto the tidal flats, and the mangrove forest to the north, the variety of birds is extensive and exciting. Add in the passage of migrant species, we have some ever-changing species of birds throughout the year.

Other than the bird baths we are using only natural ways to attract the birds to Kijongo Bay Resort gardens. We do not use feeding platforms to attract birds. 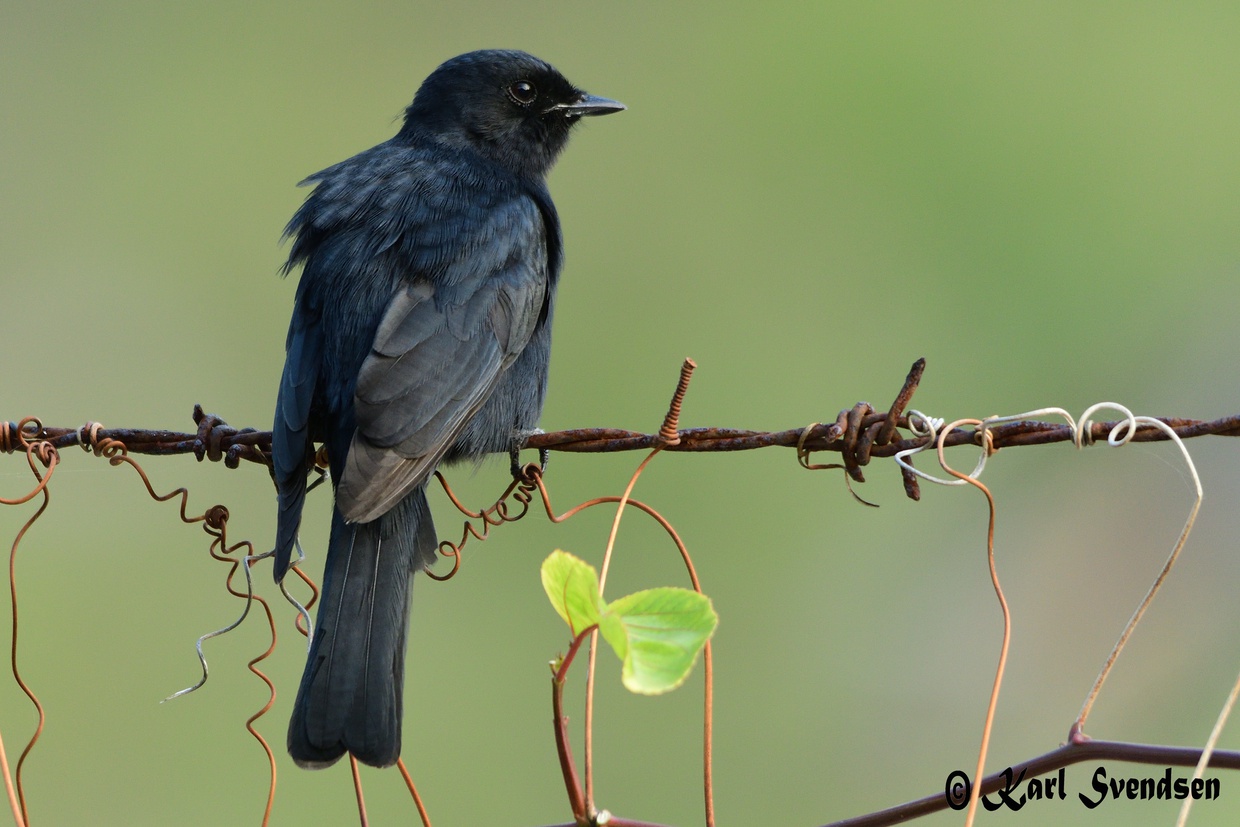 A shiny black bird, which appears as a glossy blue/black in the correct sunlight, around 18 cm in total length, with a dark brown eye. Similar to Drongos, which have a red eye and are slightly larger.

The southern black flycatcher is an insectivore. It is normally seen perching on low branches, on the lookout for its next meal. If it is an insect, and it moves, the flycatcher will eat it, with them eating just about all insects. It actively feeds on the wing and will feed on the ground.

Breeding peaks in September and October, with 4 eggs being laid and the youngsters leaving the nest around 35 days later. This flycatcher is monogamous. 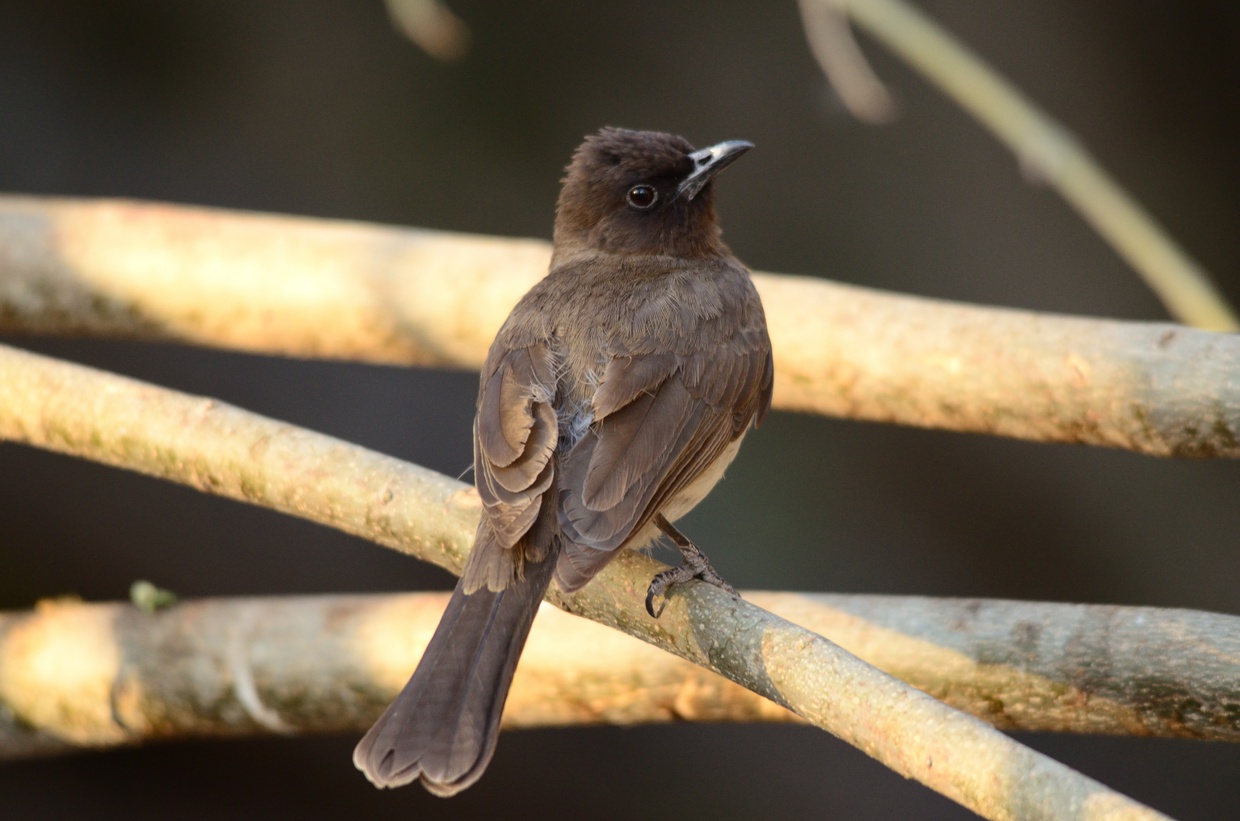 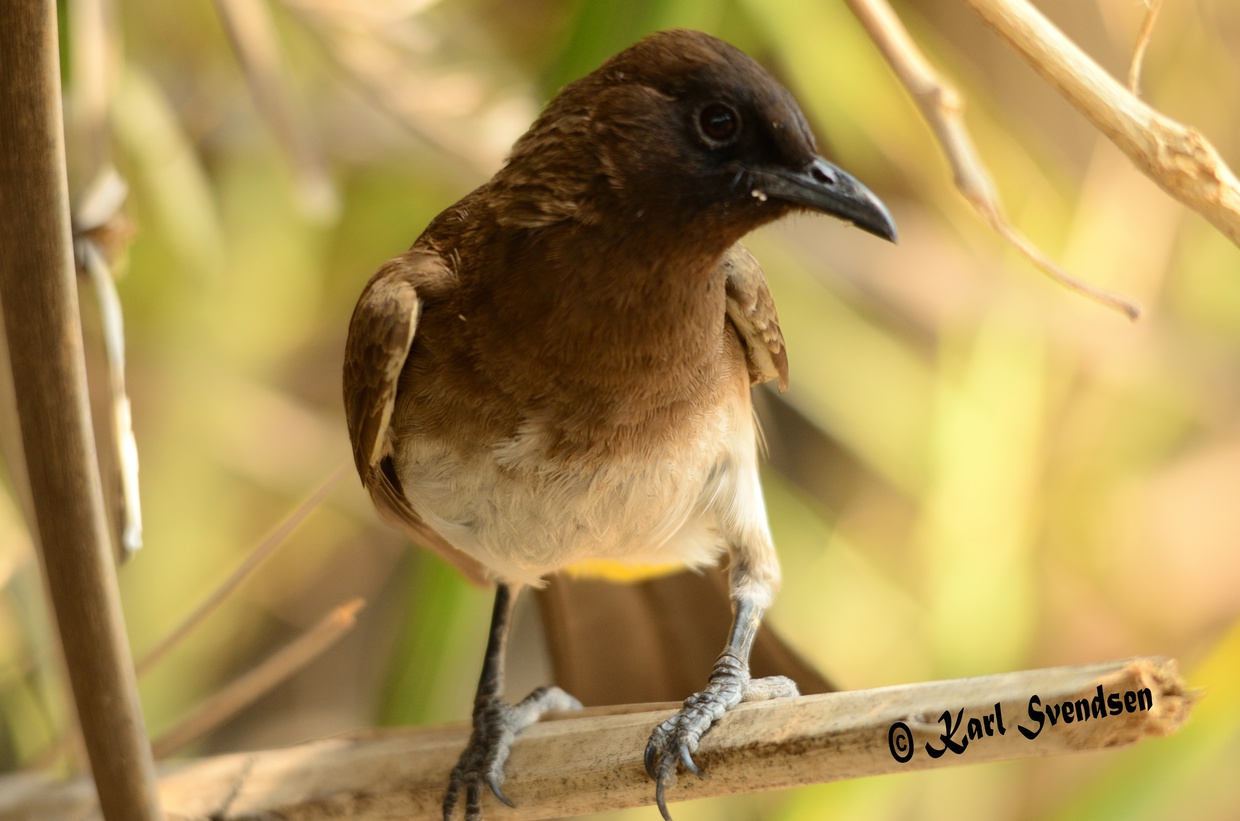 Bulbul feed predominantly on fruit and seeds, but will feed on insects when they come across them.

Nesting takes place throughout the year, with nests being targeted by Jacobin Cuckoo's, which are brood-parasites. 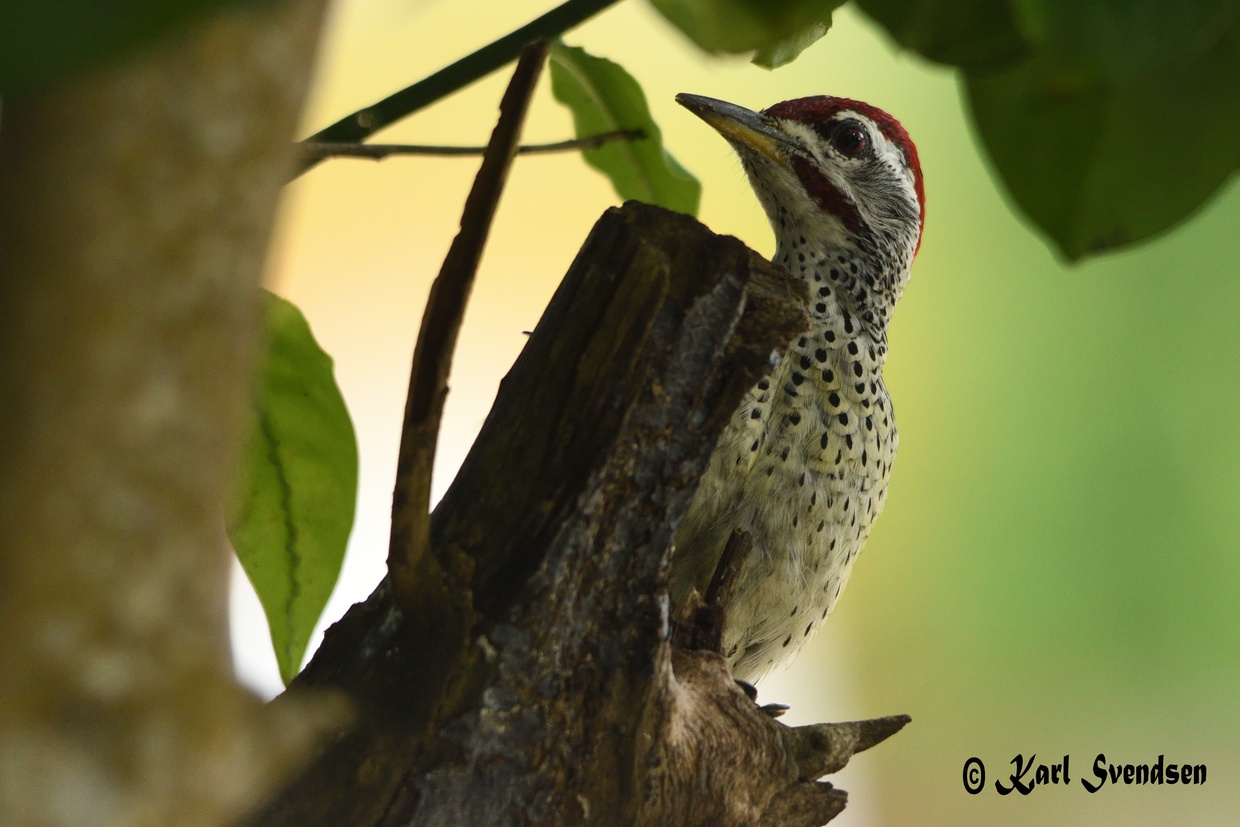 A green back with off yellow barring, a speckled chest, this woodpecker is often misidentified as a Nubian woodpecker. The speckled-throated, as the name suggests, is distinguished from other woodpeckers by its speckled throat and a yellow or off white lower mandible. Both sexes have a red cap, with the female having a black speckled fore crown.

Often heard hammering away at a tree, long before it is seen. Woodpeckers are insectivores feeding on ants, termites, bugs and caterpillars.

Woodpeckers breed in cavities that they have excavated in trees. 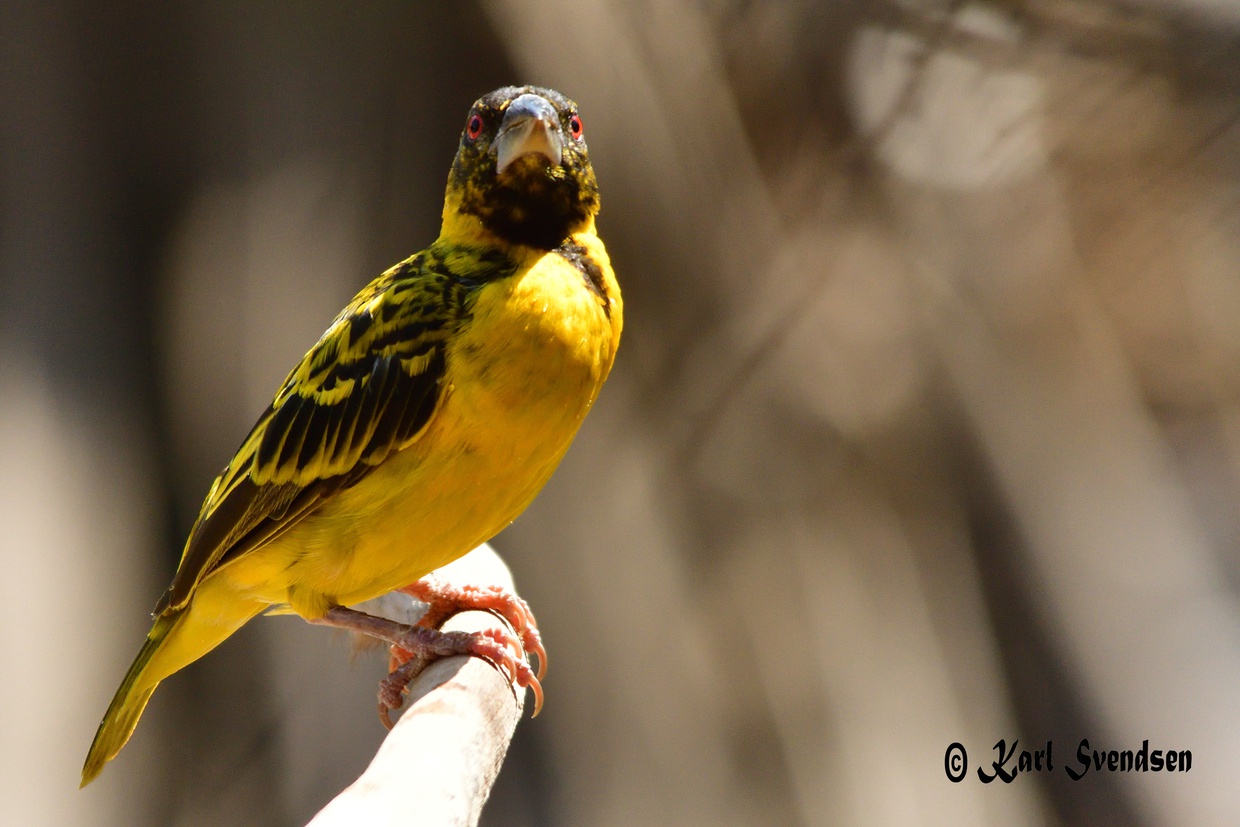 Also known as a Black-headed weaver or Spotted-backed weaver.

The village weaver is a stocky bird around 17cm in length, with a dark red eye and a typical conical weaver shaped bill. The weavers of this species can cause some confusion with identification as it has distinct breeding and non-breeding colours. 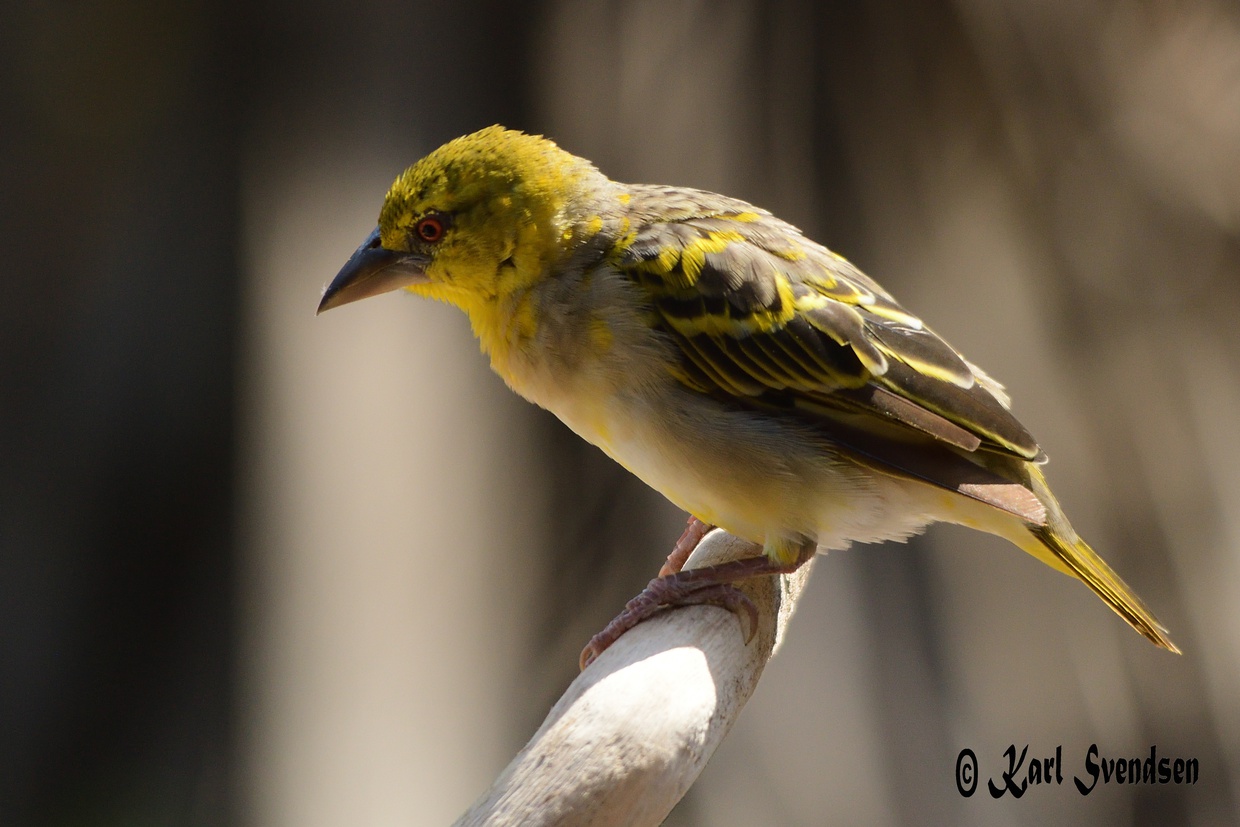 The non-breeding male has a mostly greenish to yellow head, a yellow breast and off white belly. The breeding male has a black head with a chestnut edge, tapering to a point on the yellow chest. The female has yellow and black streaked wings and pale yellow to off white underparts. 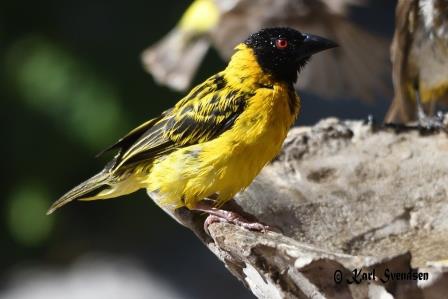 Village weavers nest in colonies with up to 100 nests, in a single tree. Kijongo Bay colonies are not as numerous, with 2 nesting colonies in our gardens. 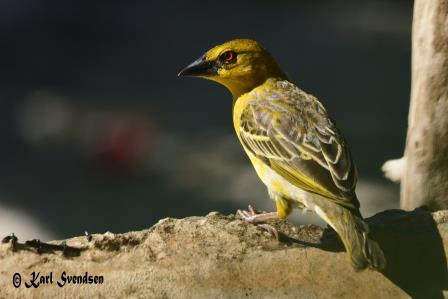 They are very noisy on their nesting sites. The nests are woven by the male, around 15 cm long and oval to kidney shape, with an entrance tube of around 6 cm on the bottom. It is estimated that each nest is made from around 300 individual strips of leaf.