Kingfishers of Kijongo Bay and Surrounds 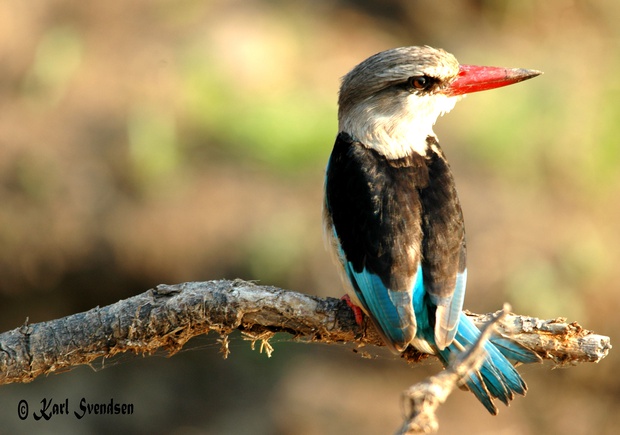 With Kijongo Bay Beach Resort being next to two bodies of water, namely the Indian Ocean and the Msangazi River and mangrove forest, we are in a very favourable position for seeing kingfishers. Not to forget Saadani National Park, which is close by and also being a great area to spot kingfishers.

As a species, kingfishers are very extensive, however with around ½ of all kingfishers not fishing or even eating fish, perhaps the name kingfisher is a misnomer.

Half of the kingfishers are insectivores and live almost entirely on insects and are not dependent on water. This half is found in bush, woodlands and forest areas and are commonly called tree kingfishers. 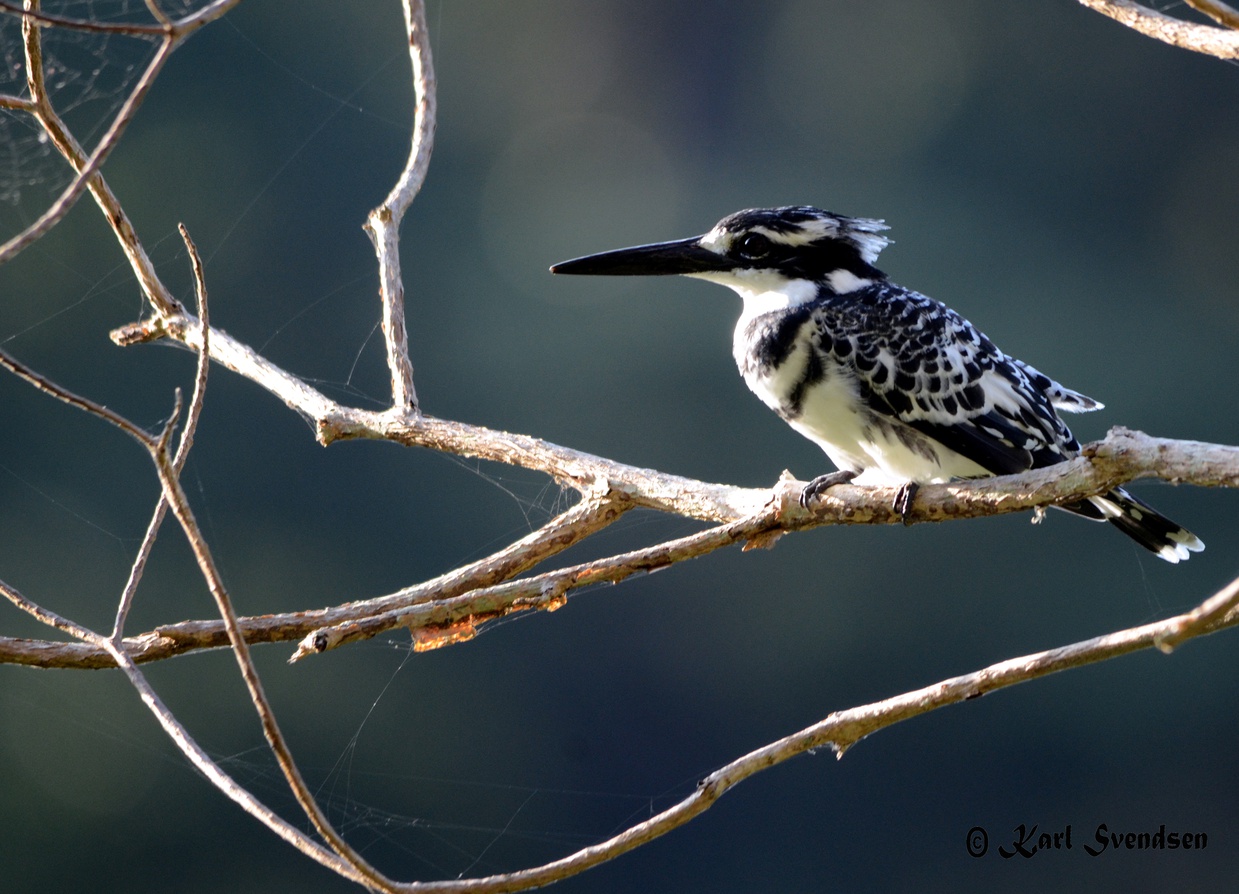 A distinctive black and white kingfisher, normally found either perching or hovering along rivers, it is not easily mistaken for any other kingfisher. A larger kingfisher at 25cm, with a large black bill and a speckled black and white back and wings and a white belly. They will often show off their crest when perching. 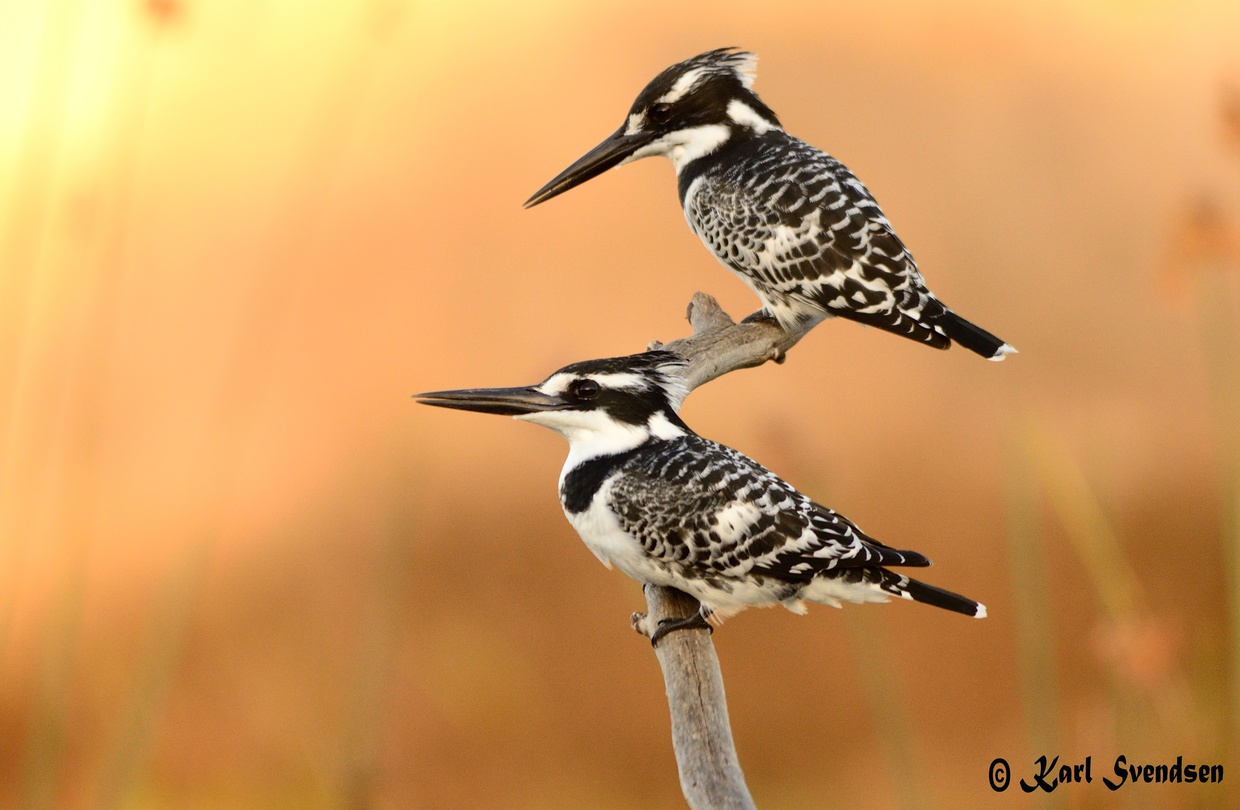 It is easy to identify between the sexes of pied kingfishers, with the male having a double breast band and the female a single breast band.

Often found in pairs or in small groups, the breeding pair are assisted by non-breeding offspring, from the previous brood. Pied kingfishers dig a tunnel in a river bank around a 1 m deep, with a chamber at the end to nest.

Pied kingfishers have a diet made up almost exclusively of fish, but will feed on large aquatic insects and small crustaceans, that are swallowed whole. They return to their perch before swallowing their prey. Pied king fishers have a distinctive behaviour, in that they hover and then perform a steep dive into the water. 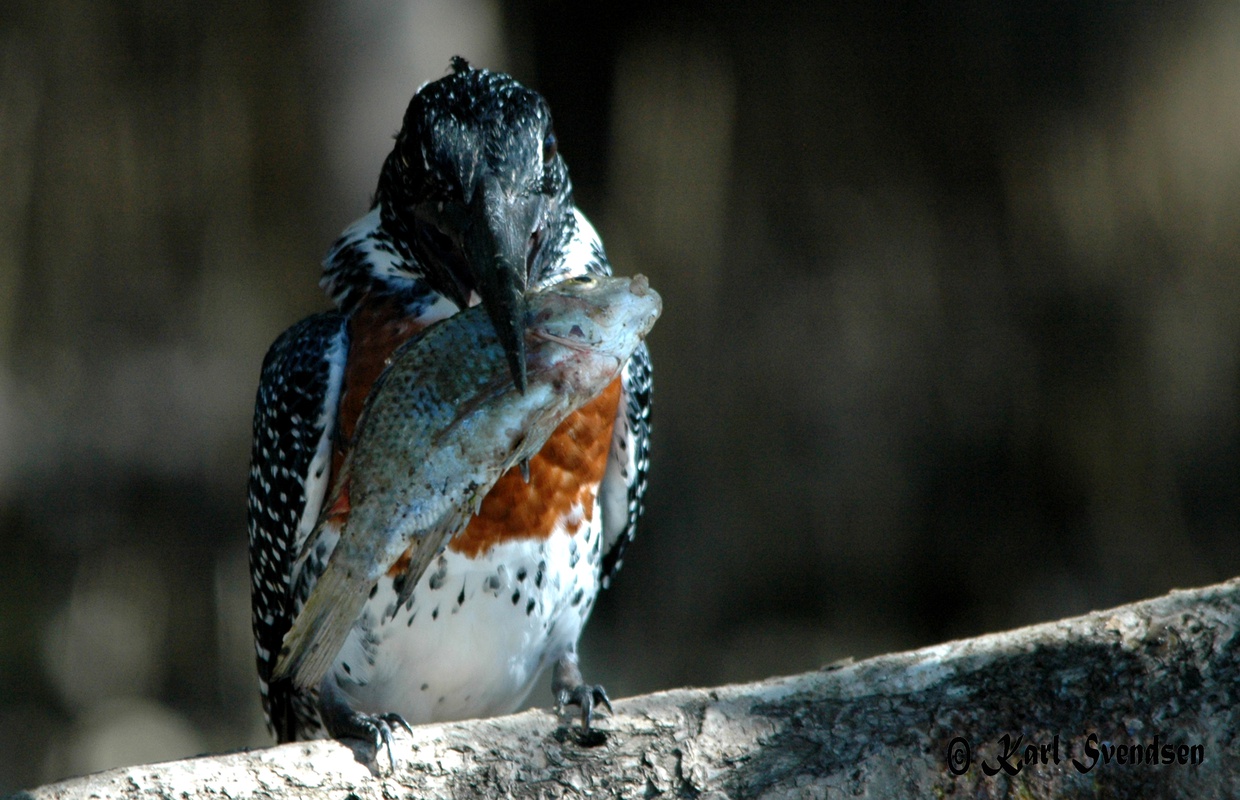 As its name suggests it is the largest of the kingfishers, at around 43 cm in length, the giant kingfisher is large and bulky, with black, white and chestnut markings. The wings are marked with fine white speckles above and fine bars below. The sexes are identified by the male having a chestnut upper breast and the female having a chestnut belly and underwings. 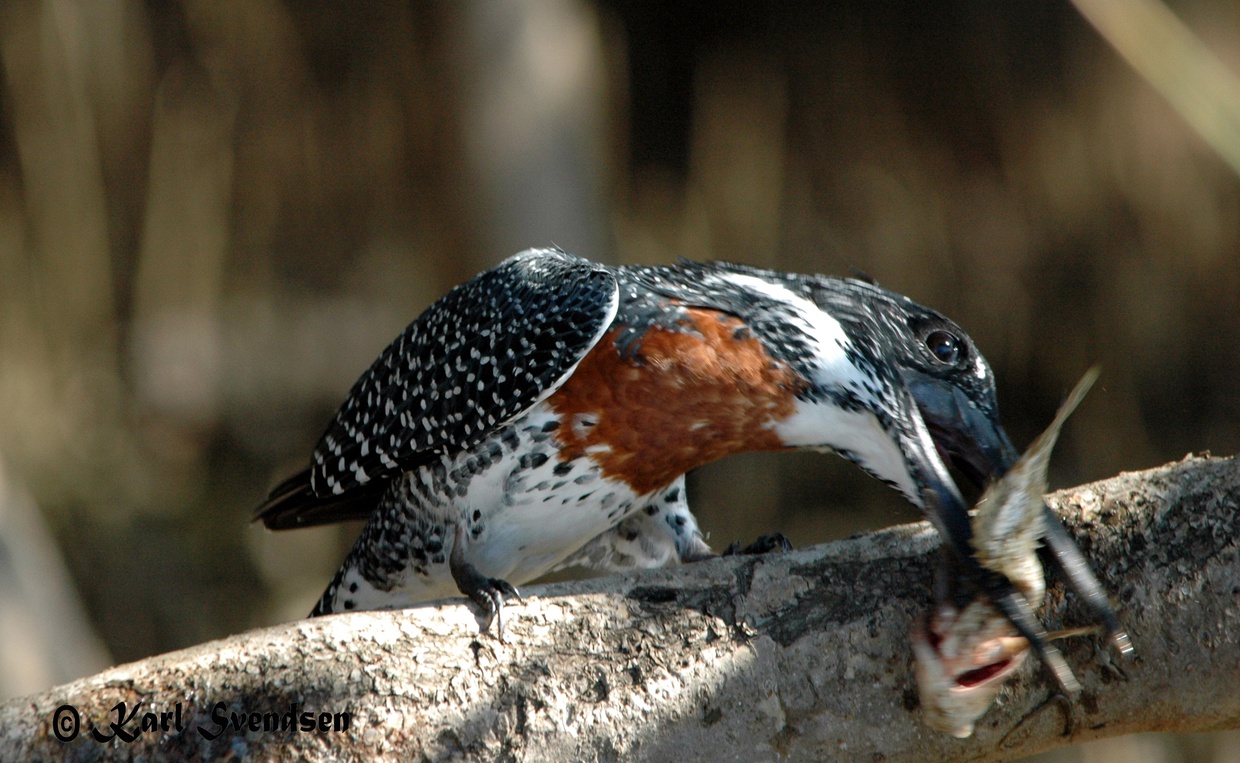 The giant kingfisher feeds by diving from a perch to catch fish, crabs and frogs. Giant kingfishers are often seen beating their caught fish against its perch. This serves 2 purposes, it stuns  or kills the fish before it is swallowed head first, the second reason is that it is suspected that the scales that are knocked off the fish, fall into the water, and then attract other inquisitive fish, which are then hunted.

Like the pied kingfisher, the giant kingfisher is a tunnel breeder, but with the tunnel being larger. 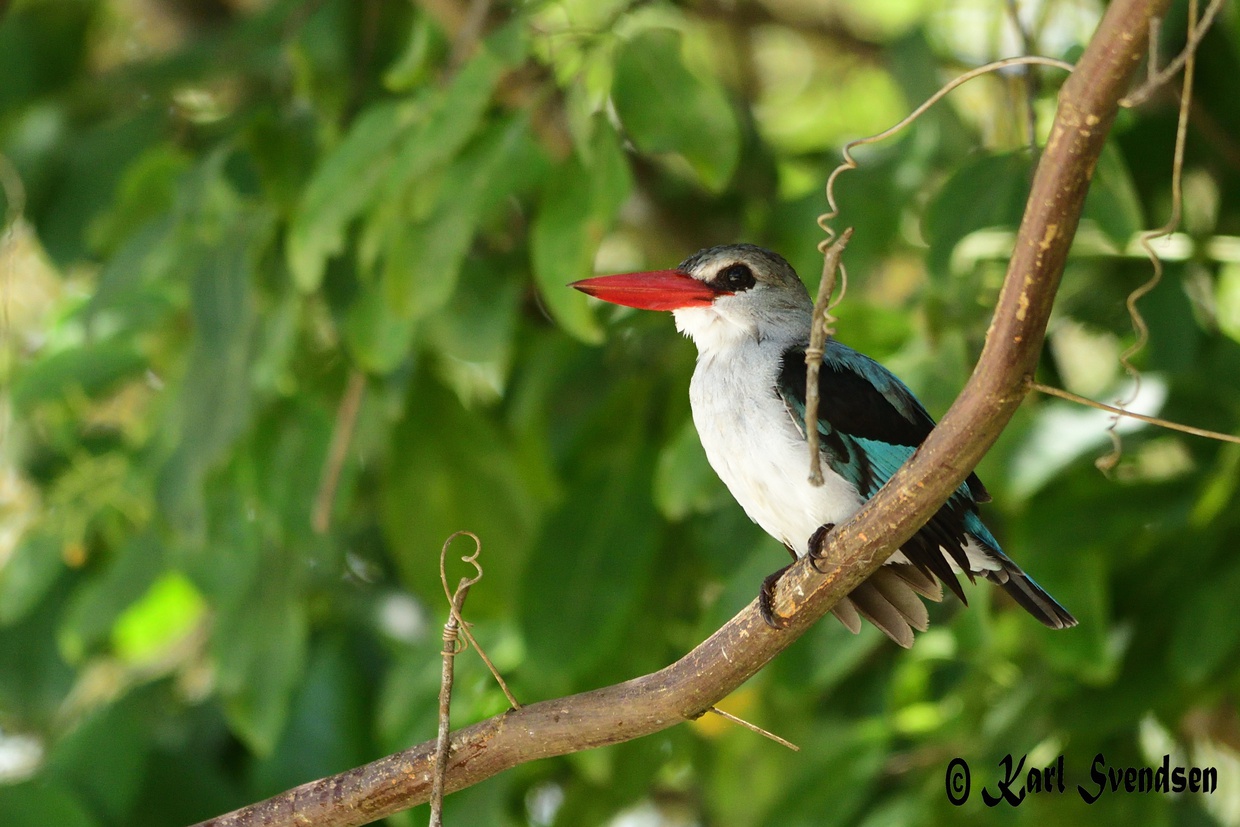 The mangrove kingfisher is a medium sized kingfisher that is light grey, black and bright light blue, with a prominent brightly coloured red bill, with the tip being black in most birds..

The mangrove kingfisher is a noisy kingfisher with a distinct call of accelerating chit notes.

The mangrove kingfisher is found in almost all coastal areas, ranging from estuaries, mangroves, forest, gardens, and open thorn tree country.  This kingfisher feeds according to it surroundings, with them catching lizards, insects, prawns, fish, and crabs.

Mangrove kingfishers breed in holes in trees and termite mounds, away from water.

This kingfisher is a constant visitor to the gardens of Kijongo Bay Beach Resort. 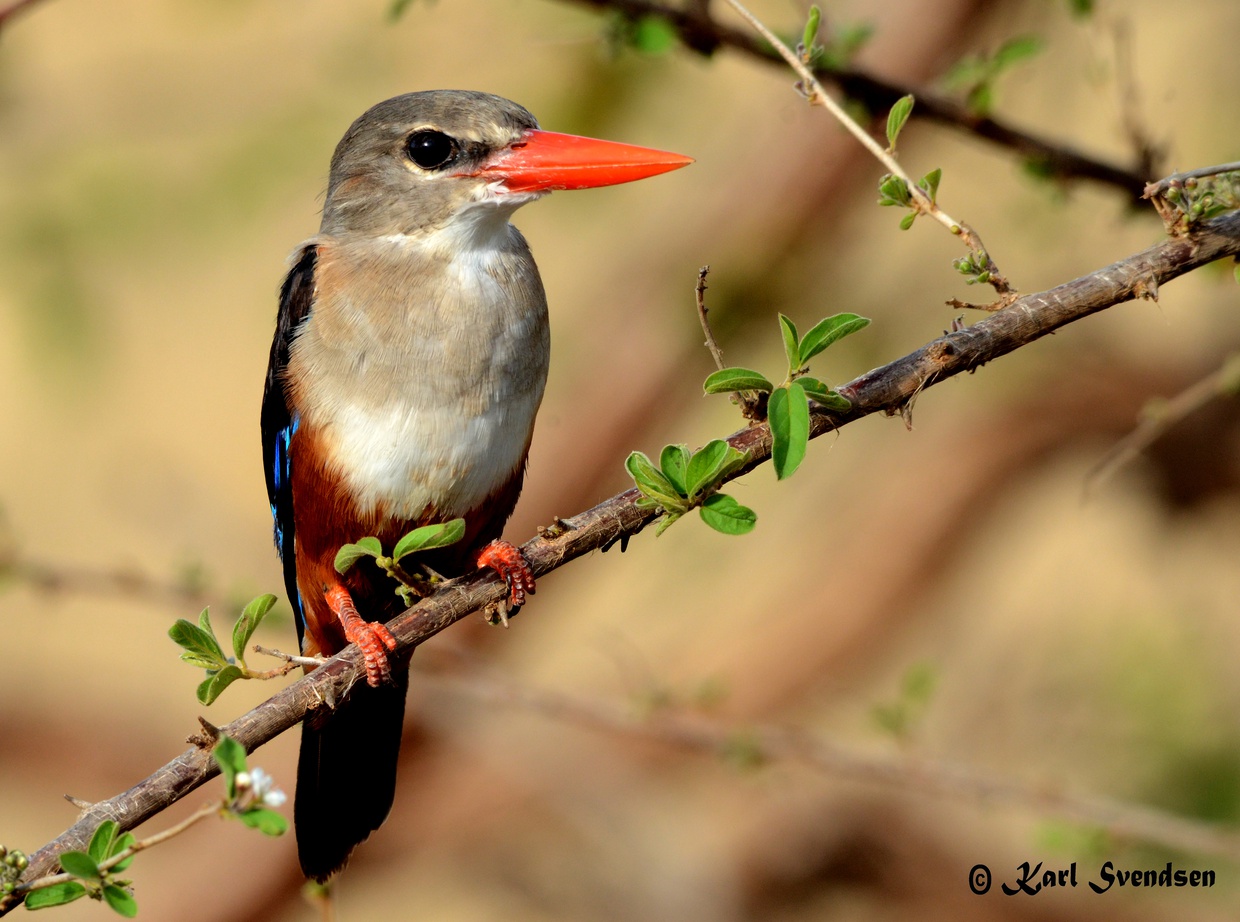 The grey headed kingfisher is a medium sized kingfisher, around 20 cm in length, with bright blue flight, tail and lower back feathers and a red bill. The head and chest are an ash grey colour, with a distinctive chestnut belly. The underwings are a tri colour of rufous, white, and black, very distinctive when in flight. The chestnut belly is the main identification feature that is used to set the grey headed apart from the brown hooded kingfisher.

The grey headed kingfisher is a perch hunter and will sit unmoving for long periods and then swoop down to catch insects and small reptiles.

The grey headed kingfisher is a hole nester, normally in steep riverbanks. It is parasitized by the greater honey guide. Its normal habitat is woodlands, making Saadani National Park and its surrounds a good place to see this bird. 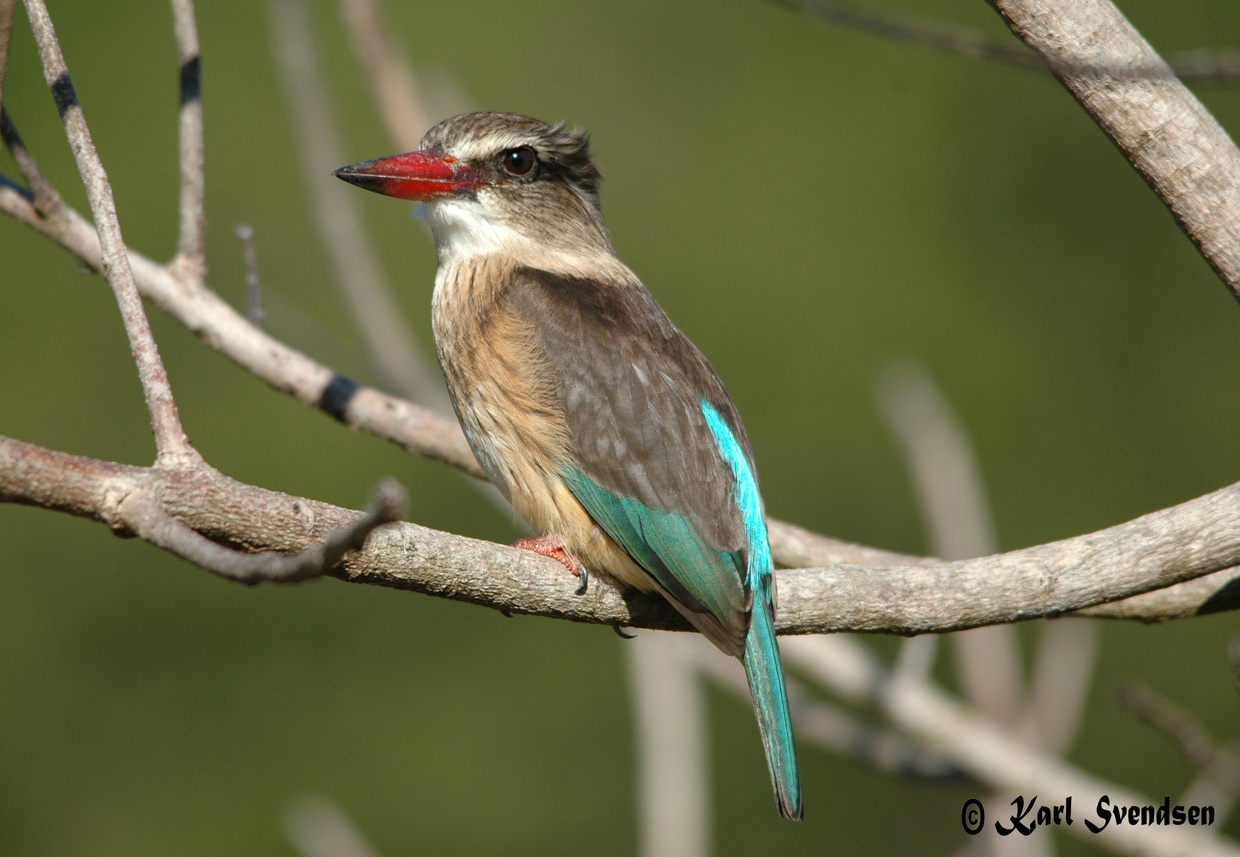 The brown hooded kingfisher is a medium sized kingfisher, around 20 cm in length, with blue flight and tail feathers, a red bill with a darker tip. The underwings are a cinnamon to rufous colour.

The brown hooded kingfisher normally forages on the ground, catching insects, small reptiles, and rodents. Will also, in some cases, feed on fish, but is not water dependent.

The brown hooded and the grey headed kingfishers are very similar and are often mistaken for each other, but the grey headed has a chestnut to rufous belly, and has multi coloured underwings in flight, being white, black and rufous. 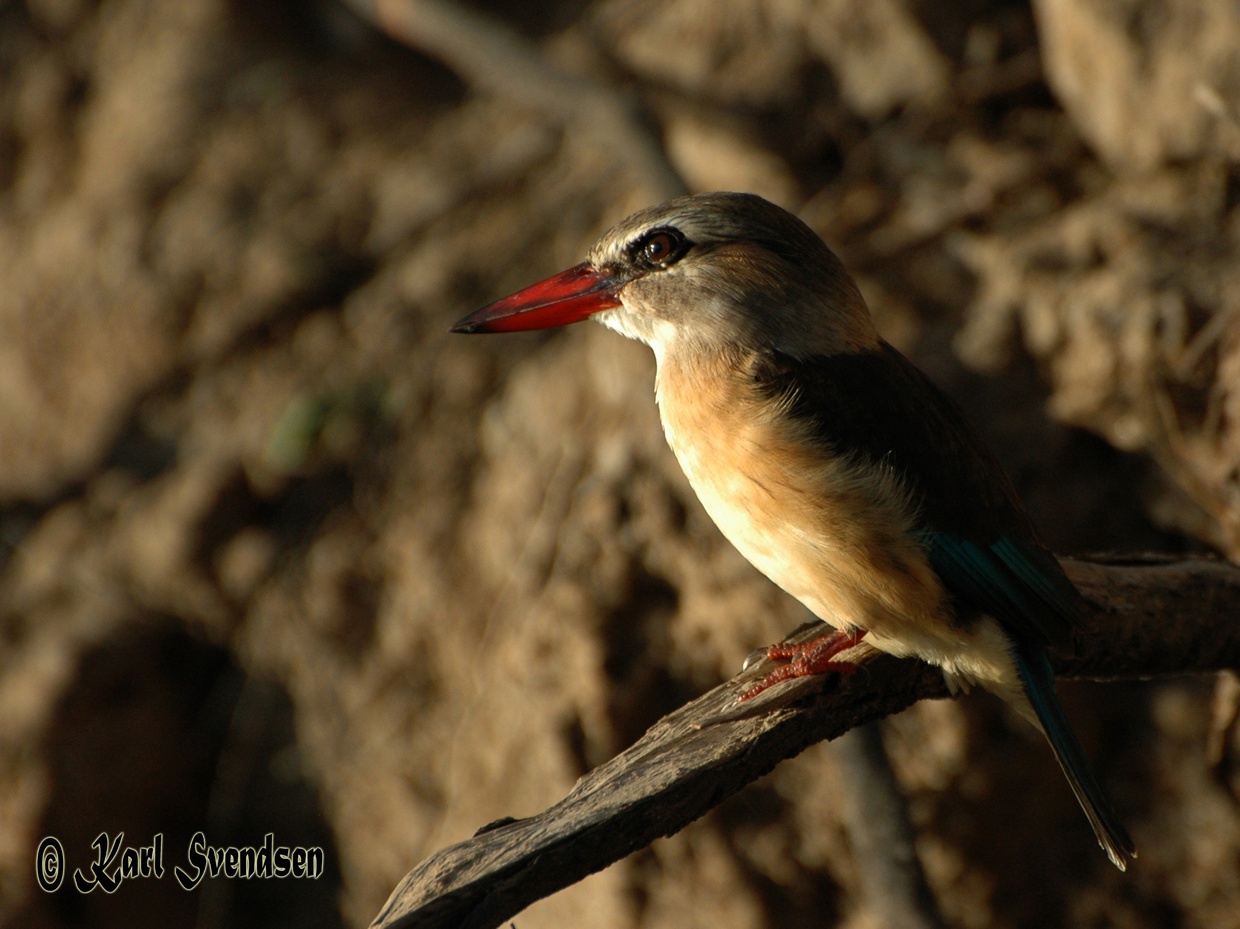 To identify immature birds, the only difference is that the brown hooded kingfisher has a dark bill, versus the grey headed kingfisher's red bill. 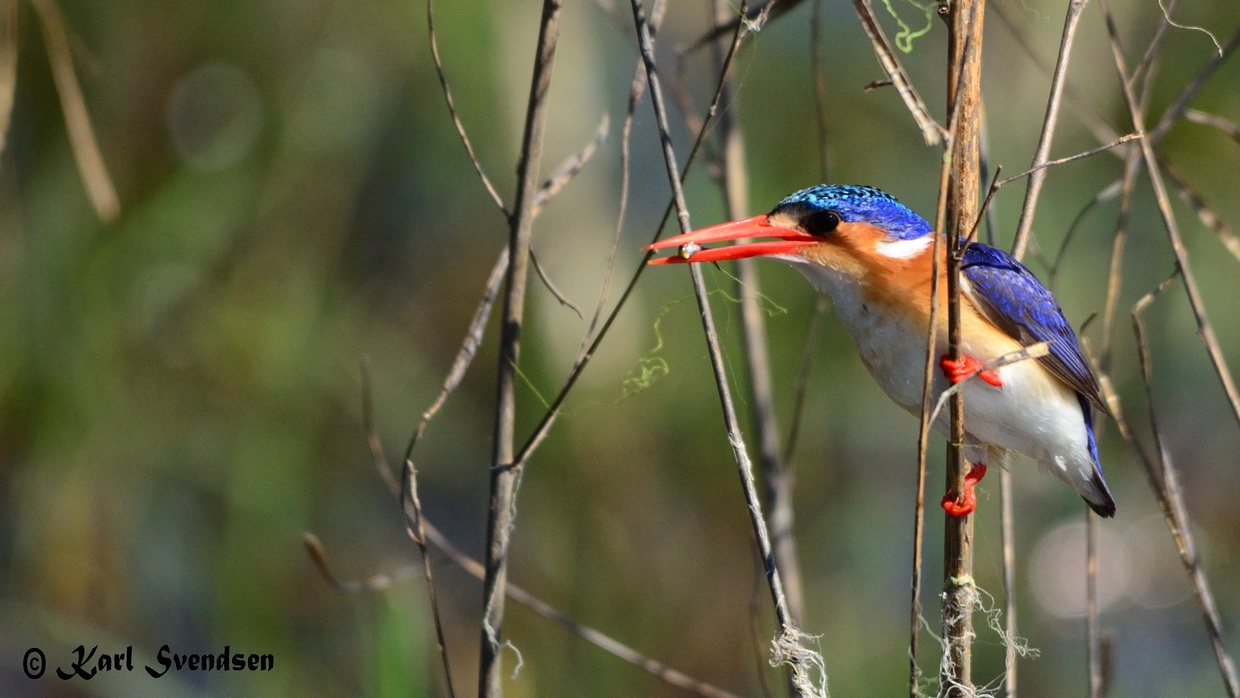 At around 12 cm, the malachite kingfisher is the smallest and the most colourful kingfisher in our area.

The malachite kingfisher is blue above and rufous below. The head has a small crest of black and blue feathers, this leads to its scientific name, Alcedo cristata, with cristata coming from the Latin word cristatus, meaning with plumb or with crest. The rufous colour extends to the chest, cheeks, and face, with a white patch on both the throat and back of the neck. The legs are bright red, and the bill is red. 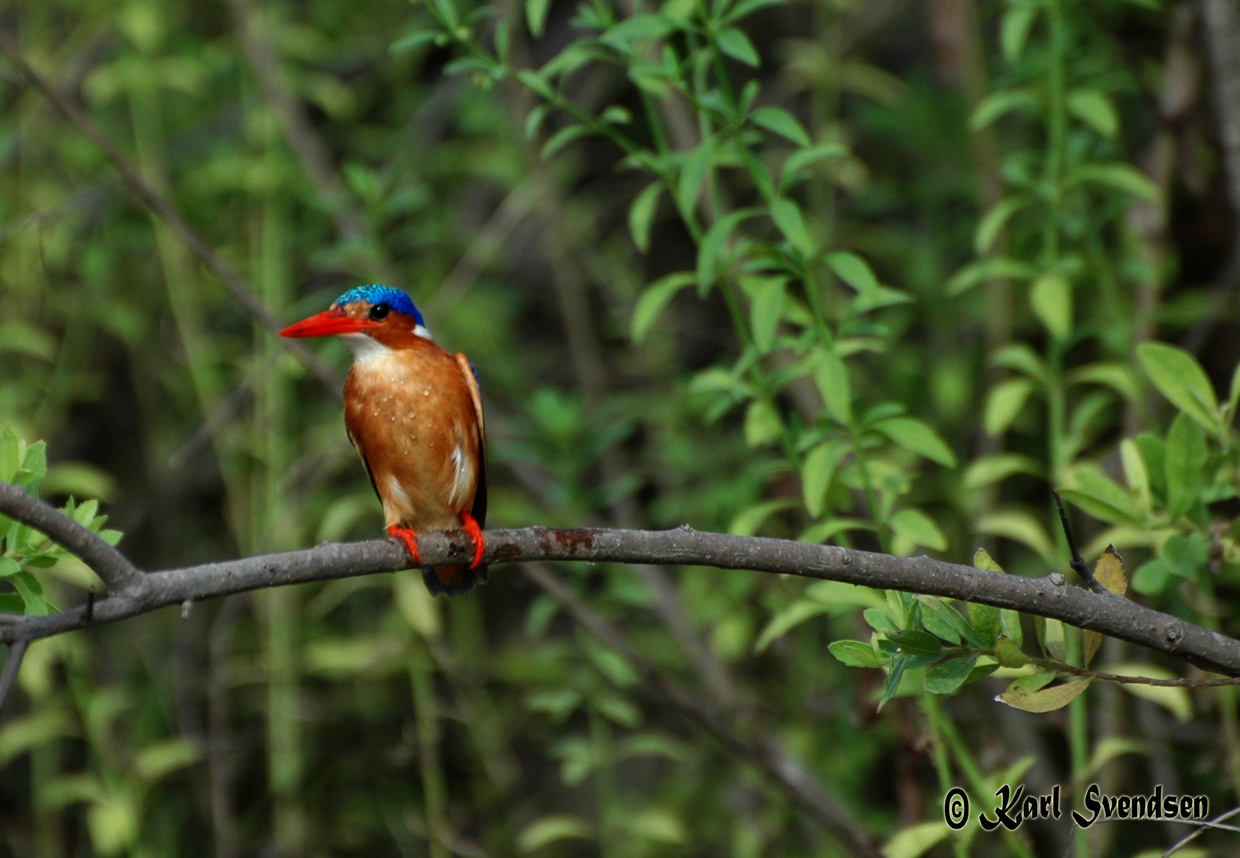 The malachite kingfisher has its favourite fishing perches, from which it will sit in an upright stance watching for prey, and when found, will dive down to catch it. It will then return to the same perch, beating its catch against the perch and then swallow it headfirst. The diet of a malachite kingfisher is predominantly fish, but small insects and crustaceans are also consumed in a similar fashion. 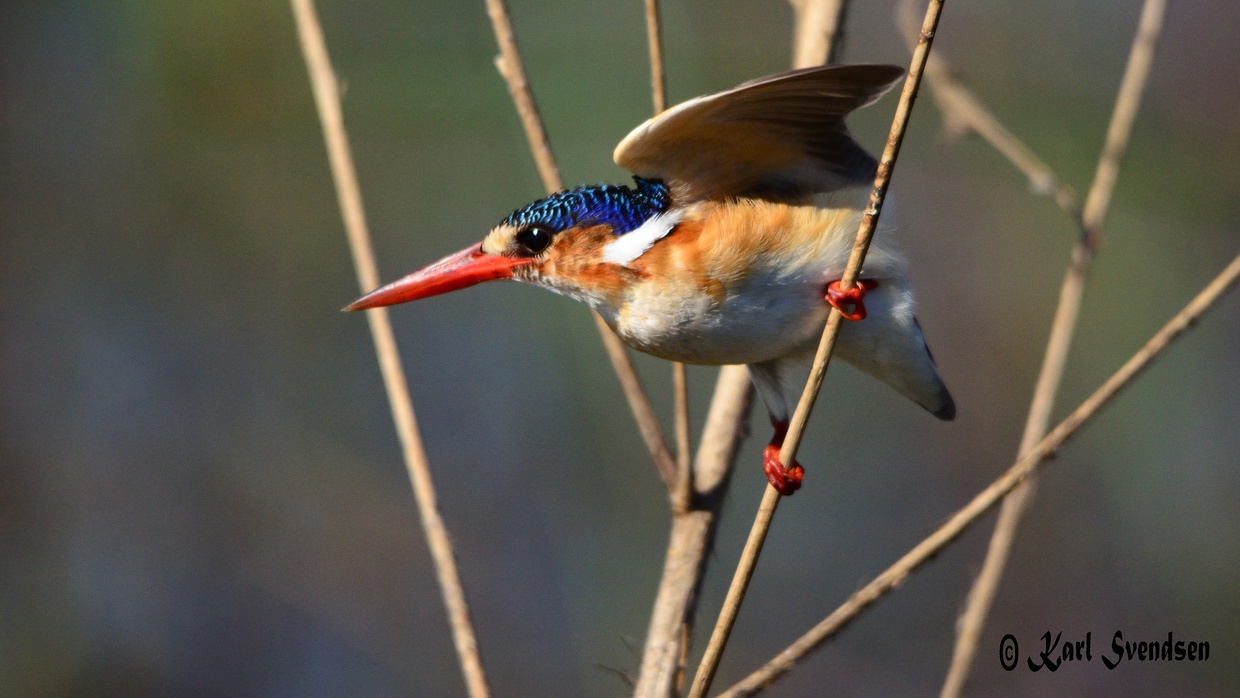 The malachite kingfisher is a tunnel breeder.

The malachite kingfish is occasionally spotted in the mangroves during a river cruise but is a common sighting in Saadani National Park. 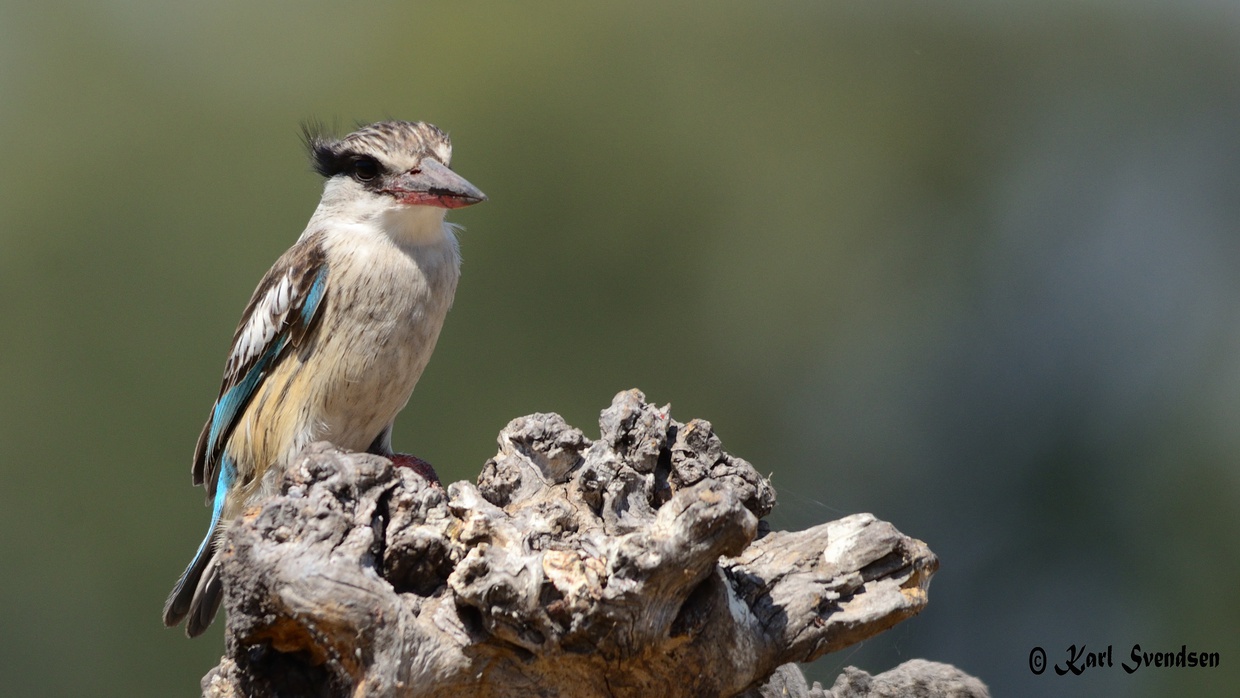 The stripped kingfisher is a small, drab, kingfisher with powder blue flight and tail feathers, a dark eye strip, a streaked brown crown and a pale streaked chest. The bill is black on top and red below.

The striped kingfish is a very vocal bird and spends a lot of energy calling every morning.

The striped kingfisher diet is made up almost exclusively of grasshoppers, followed by other like sized insects. It is a perch hunter; it sits on an exposed branch and swoops down onto its prey. It will then return to its perch to swallow its victim. 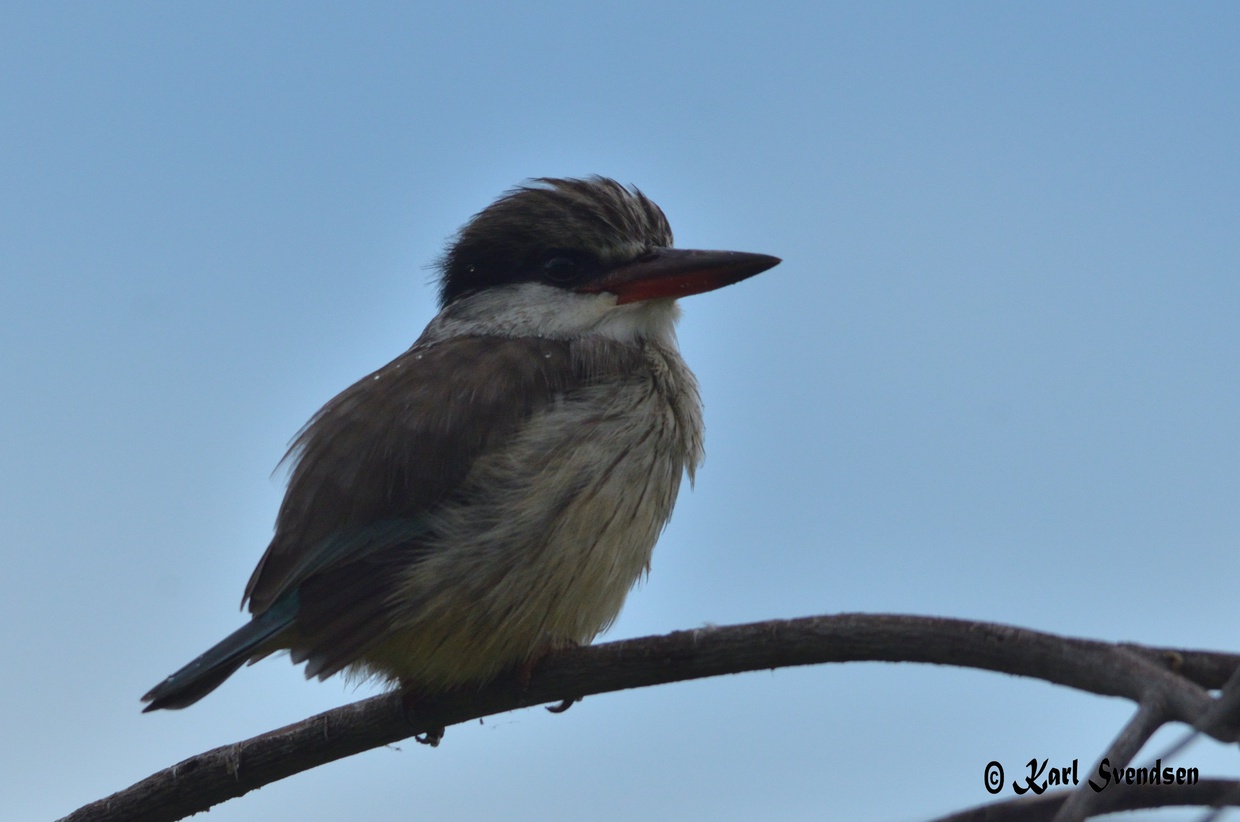 This is a very territorial kingfisher and actively defends its territory from other striped kingfishers.

A resident pair are sometimes seen along the road just outside of Kijongo Bay Beach Resort.