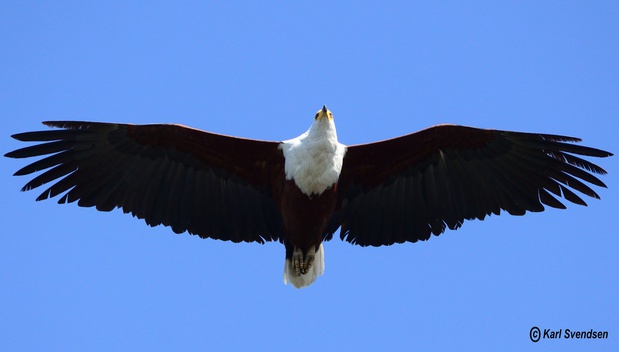 As you relax, at Kijongo Bay Beach Resort, whether lazing by the pool, on the beach or on your balcony look up to the skies and see if you can spot some of the raptors that we often see soaring overhead. 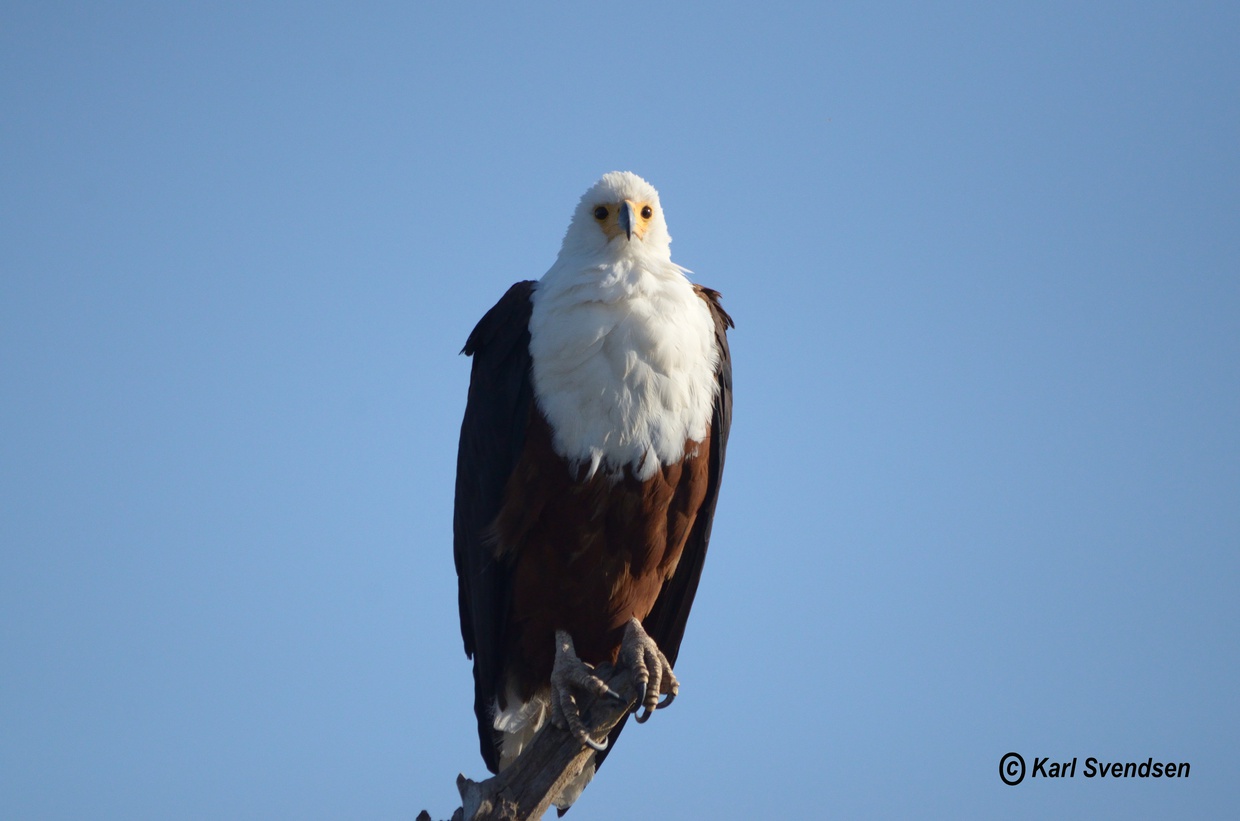 The African fish eagle with its head thrown back when calling, has one of the most distinctive bird calls in Africa. At Kijongo Bay, it is a call we hear most mornings at sunrise, echoing across the water, as a resident pair live in the mangroves close by. 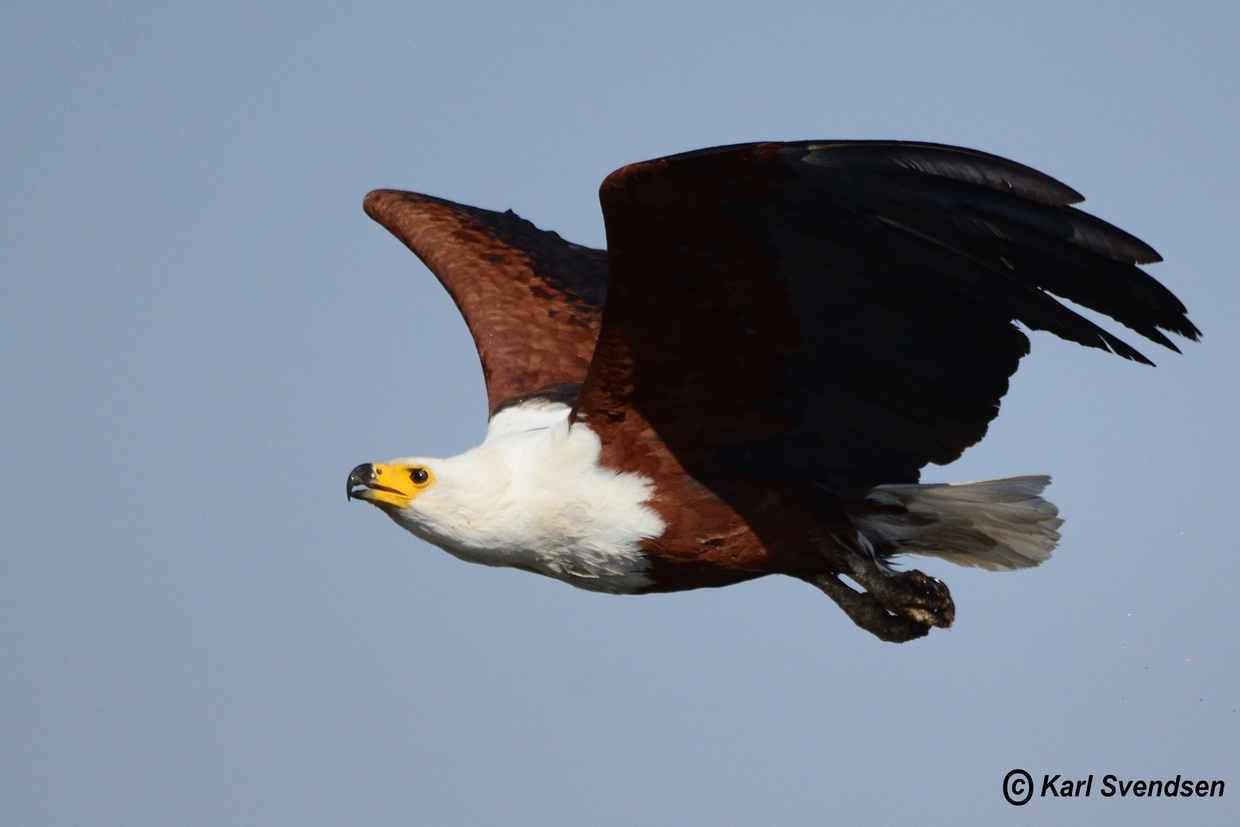 The adult African fish eagle is a large eagle with a distinctive white head and breast, and a chestnut and black body, that is often seen perching high up, alongside water. The fish eagle has a wingspan of between 2 and 2.5m, with the female being the large of the pair. The juvenile is a scruffy brown with a dark cap, with sub adults gradually gain a white head and underwings. Recent studies are suggesting that fish eagles mate for life. Fish eagles are very territorial when breeding and will chase off any intruders with a spectacular aerial flying display and vigorous calling.

Fish Eagles feed mainly on fish, which they swoop down to catch in the water, it is an opportunistic feeder and will also feed on water birds, baby crocodiles, frogs and are often seen feeding on carrion. They also practice a behaviour called kleptoparasitism, stealing other birds’ fish. 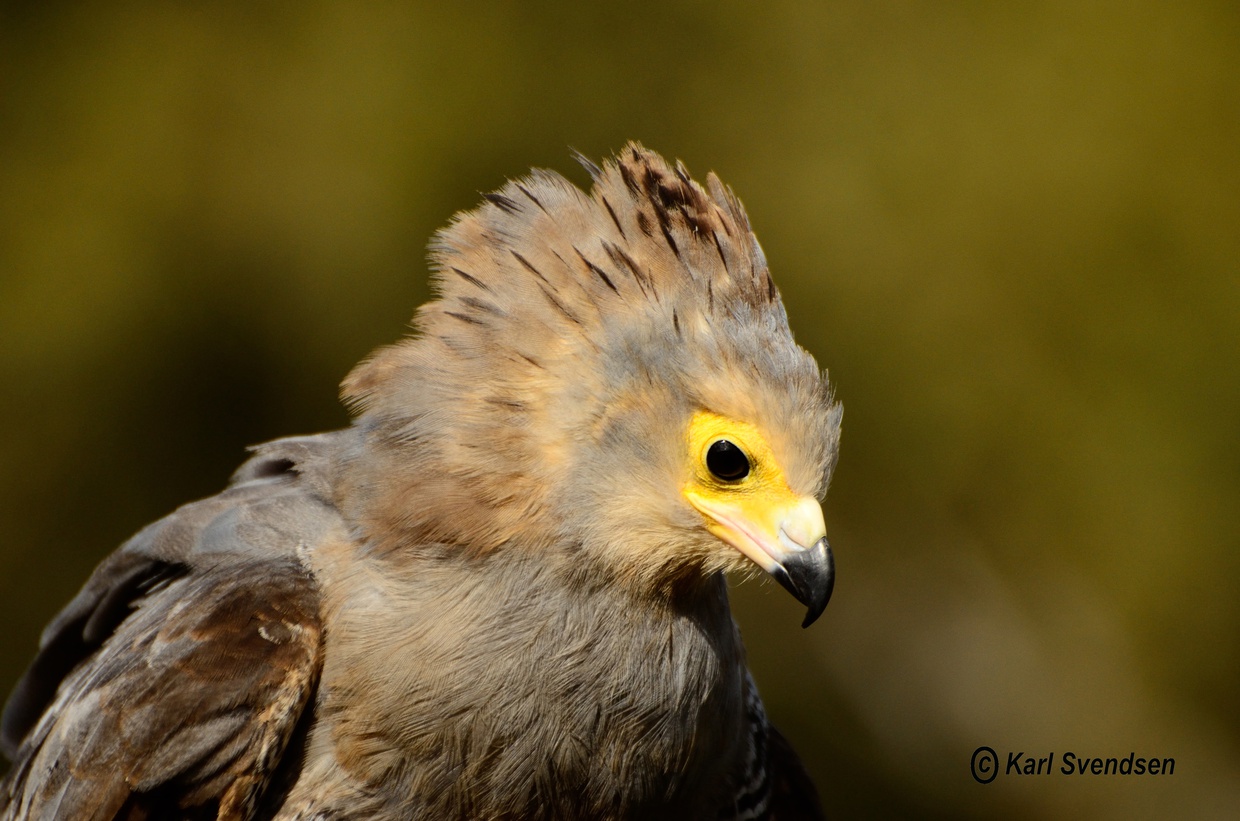 Often known by its old name of Gymnogene, the African Harrier hawk is a large, 65 cm in length, mostly grey, broad winged hawk, with a naked face. The broad wings have a black trailing edge, with a thin white line. In flight a single white band can be seen across the black tail. The bare face is yellow in colour but will change to red when the bird is excited or more often during breeding. 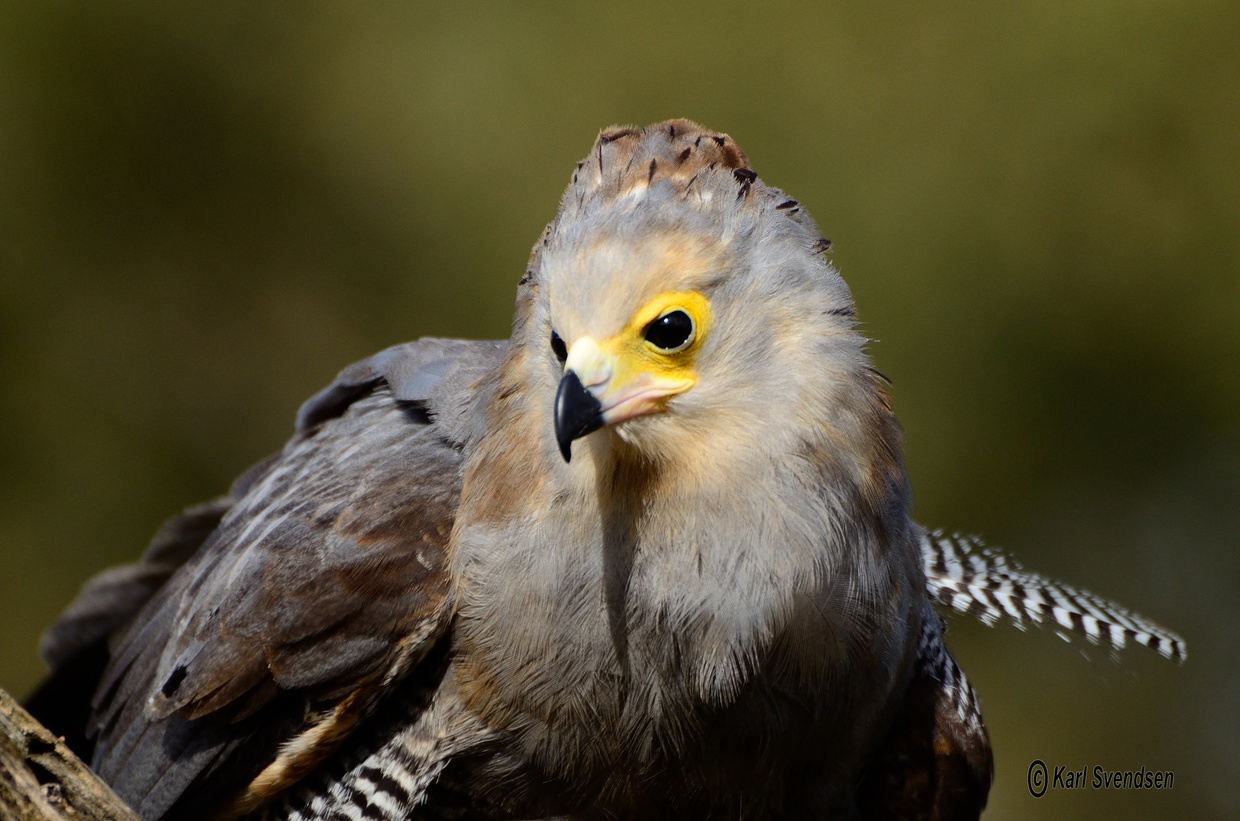 This Harrier hawk is omnivorous, feeding on smaller vertebrates and the fruit of some palm trees. It has a special hunting technique, using its feet and wings to climb up and down cliff faces and trees. It then it uses its double jointed knees and extra-long legs to access nest holes and other hiding places. It then extracts birds’ eggs or whatever is hiding, to feed on. At Kijongo Bay Resort, we have seen them raiding both the weaver nests and the palm swift nests.

A breeding pair is often seen foraging around Kijongo Bay Beach Resort gardens, we know they are a breeding pair as they had 2 fledglings with them for a few visits. We suspect they are nesting in the mangroves. 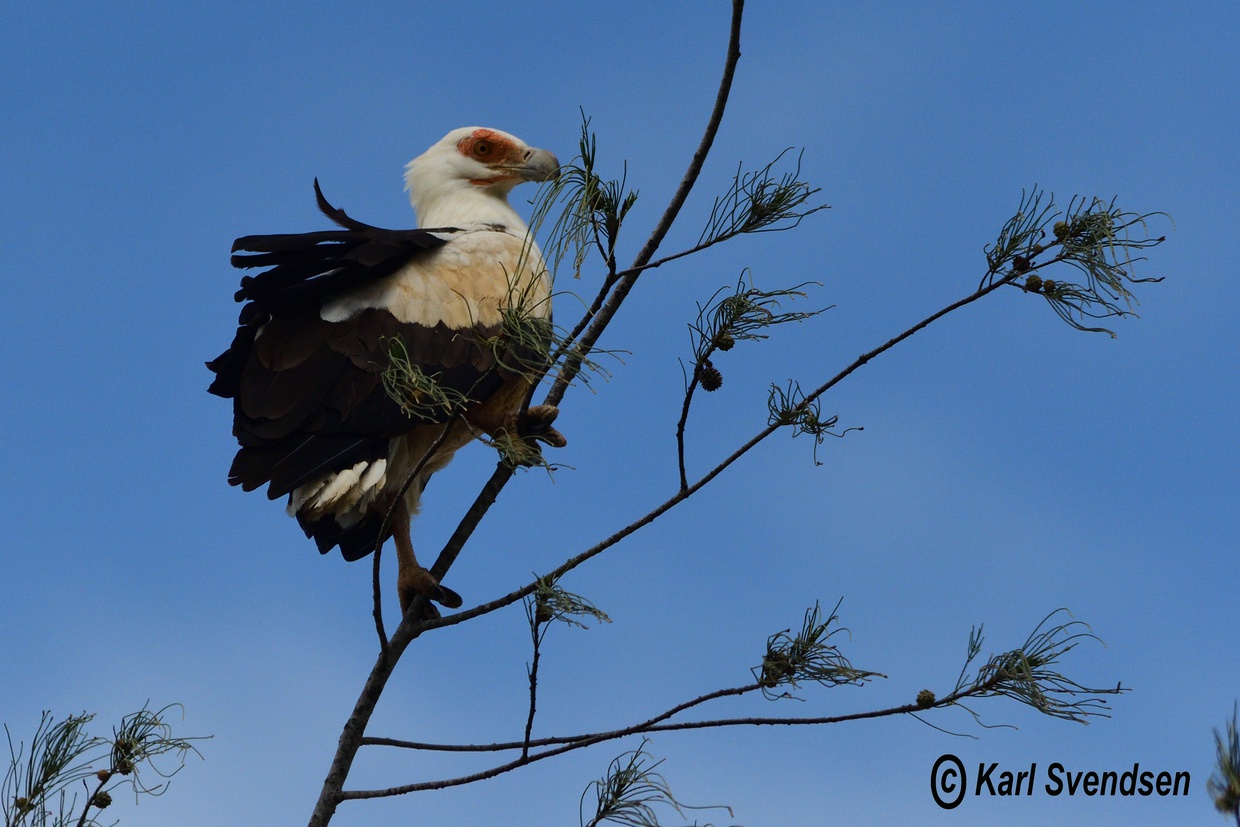 An abnormality to the birds of prey family, as this vulture is mostly vegetarian, (we can cater for almost all diets at Kijongo Bay Resort).  Around 2/3 of the adult birds’ diet and almost all of a juveniles diet is made up of the fruit from both the oil palm and the raffia palm, they will also feed on crabs, fish and small mammals. It will feed on carrion, but this is not a common food source. Its distribution is also linked to these palm trees, making the coastal region the best place to spot a palm nut vulture.

These vultures are seen fishing on the tidal flats during low tide, they are spotted frequently when visiting Saadani National Park and sometimes roost in the coconut trees at Kijongo Bay.

A smaller raptor at around 36 cm in length. This stocky hunter is grey with a prominent pale throat, split with a black stripe running vertical (this mark distinguishers the lizard buzzard from all other buzzards). The black tail has a white bar running across it, splitting it in two. The lower chest and belly are finely barred dark grey and white. The legs and cere are red, with a dark eye.

We will post a photo soon, this bird is seen hunting often and roosting in the main building eves, but is very shy and skittish.